Who's Who Of Wingnuttia Gathers For Family Leadership Summit In Iowa To Praise Jesus, Hate Obama 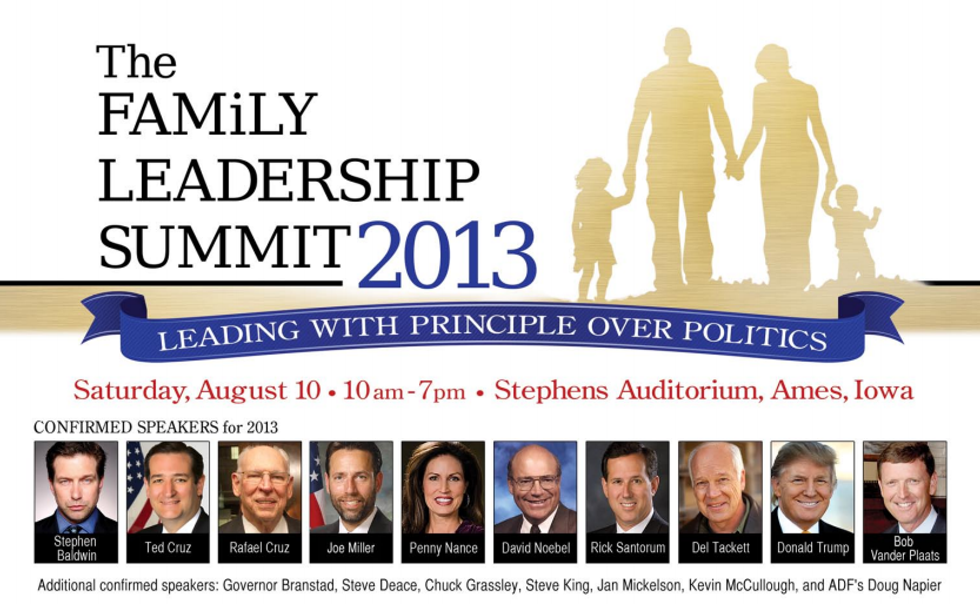 The next presidential election, in which we will annoint Hillary Clinton to president us -- unless RNC Chair Reince "You can't spell his name without RNC PR BS" Priebus wins his war with NBC or that BENGHAZIIII!!!1 thing ever catches on -- is a mere eleventeen bazillion days away, which means it's time for all the attention whores who will not ever be called president to go to Iowa, deep-throat some corndogs, and do some serious speechifying.

This weekend, the freedom cream of the Republican Party is getting its freak on at The Family Leadership Summit. You remember The Family Leader, of course. That's the conservative group that in 2012 made Republican presidential candidates sign The Marriage Vow, which included a not-very-fair-to-Newt-Gingrich pledge of "personal fidelity to his/her spouse," plus the usual promise to hate the gay homosexuals, to fight against creeping sharia, and "an affirmation that married couples have better sex." Yeah, that's right -- Jesus wants you to swear marrieds bone the best.

Of course, despite that, The Family Leader -- sorry, Bob Vander Plaats, president and CEO of The Family Leader but TOTALLY NO RELATION -- ultimately endorsed Rick Santorum because he coughed up the "money to promote the endorsement." Principled!

So which illustrious wingnuts will be getting their nuttery on at the big event to "to educate and mobilize the conservative base regarding worldview application and issues that impact the family"? Let's ooh and ahh at this star-studded list of speakers who will share their unique off-brand of crazy.

Stephen Baldwin -- you know, the most Jesusy and least talented of the Baldwin brothers -- will be reminding people that he is also A Actor. Rick Santorum will make an appearance. (No word yet on whether he's raised enough money to buy himself an endorsement for 2016, but fingers crossed for ya, Rick!) National Organization for Marriage President Brian Brown will be there, which will totally not be awkward at all, considering NOM is now under investigation for violating Iowa state law, but he will probably clear all that up so never mind. Donald Trump is the featured speaker this year, which definitely makes sense because who represents good old-fashioned family values better than the thrice-married dude whose current wife slathers their kid in caviar moisturizer? (Okay, admittedly, the caviar thing does not necessarily mean the Trumps aren't super swell parents, but come on, that is weird and disgusting and should be repeated often.) Rep. Steve King and Sens. Ted Cruz and Chuck Grassley are all taking time out of their busy schedules of being the laziest Congress in the history of ever to share their various conspiracy theories. And, since the GOP is so totally about hearting women, there will be two -- count 'em, TWO! -- women there, both from the Concern Trolls of America. Will they ladytalk about how real women hate abortion and equal pay? We sure hope so; we NEVER tire of hearing that shit.

This second annual summit promises to be even more awesomer than the first. (And, oh yeah, totally irrelevant to anything, unless we missed the part where the 2012 bought-and-paid-for endorsement of Rick Santorum mattered at all to anyone and made him the Republican nominee.) Especially the part where every speaker will be "asked to address a 'singular' and 'major' threat to America and to America’s families, along with the opportunity for leadership solutions to these threats." We don't know for sure, because we are not there and have not received advance copies of any of the speeches, but we are willing to bet you a nickel that all of the speakers will at least mention the singular and major threats of OBAMA and THE GAYS and quite likely BROWNS and BORTIONS. In fact, we will bet you two nickels.