Why Are We Hating Obama Today? (He Went To Stonehenge Instead Of Syria That's Why) 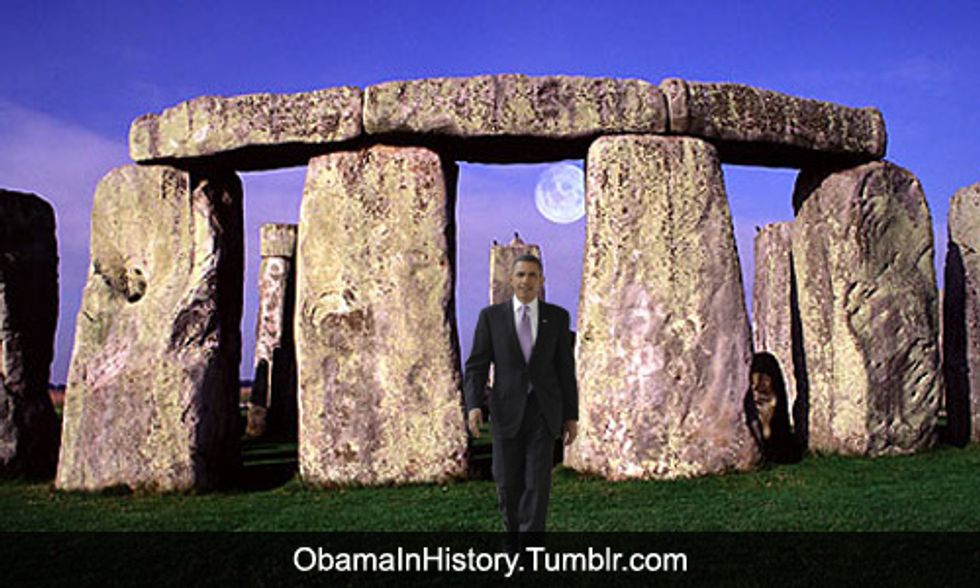 Sometimes we hate President Obama because he is golfing or dictator-ing or bad-tan-suiting or presidenting while black. But today, kids, we get to hate him for sightseeing. Neat!

See, the president is off in Merry Ol' Britainland, which is even more foreign and exotic than Hawaii, having some NATO meetings with some world leaders, which is dumb because a real leader doesn't need those other dumb countries to tell him how to lead, does he? No, he does not. (Except for Poland. Don't forget Poland. NEVER forget Poland.) While in that other dumb country that is not America, the president committed the high crime of taking 20 whole minutes to visit Stonehenge, which does not have any good airstrike targets, so what is even the point? Doesn't he realize real presidents don't sightsee? Or be Obama?

Fortunately, Dana Perino, former spokeschick for REAL President George Dubya and current One of the Official Blondes of Fox "News," is here to forgive him for his transgression while explaining why he is THE WORST:

"I don't mind that the President spent 20 minutes sightseeing and knocking something off of his bucket list [...]

But remember this is the White House that says they're not that worried about optics? Today, to show the President of the United States standing alone amongst the rocks, by himself ... I would have asked David Cameron or somebody to walk with him. Get some staff or have some — take the pilot, whatever you have to do so you don't have to, he's standing alone. I don't think that's a good optic.

Thanks, Dana. We all appreciate your expert opinion on optics. No one knows what bad looks like better than you. (Totally off topic, but did you ever get your husband to explain Cuba to you?) It's a good thing you don't have a problem with a president taking 20 minutes to sightsee. Because gosh, that sure would be awkward for you, wouldn't it?

And this concludes today's reason why we are hating Obama. Stay tuned for tomorrow's reason, which will probably have something to do with being Obama. Just a guess.