Why I, United States Senator Ted Cruz, Don’t Want to Be Canadian Anymore 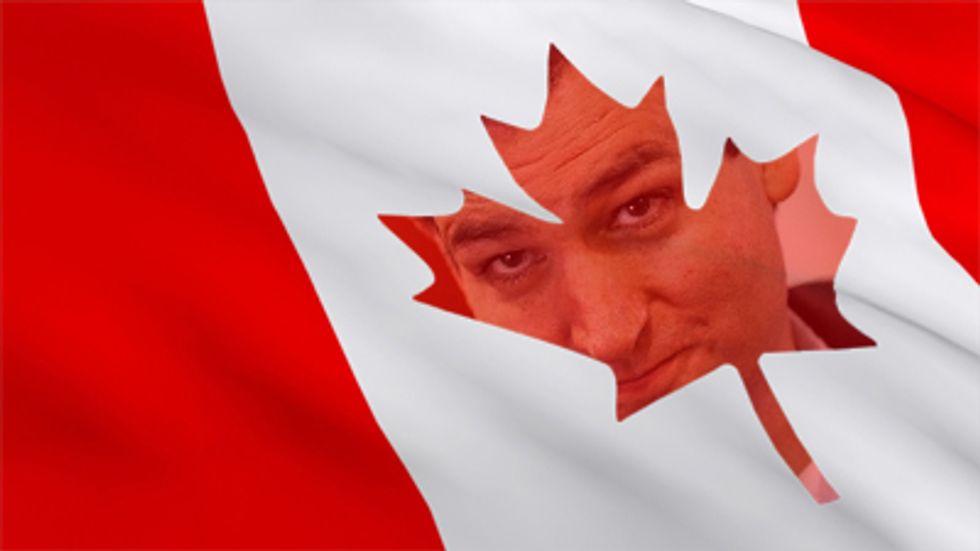 “Senator Ted Cruz, who recently discovered that he is likely a Canadian, must win security clearance from Canada's spy agency, fill in a four-page form and then wait up to eight months to sever his ties to America's northern neighbor….

“A person giving up citizenship must be Canadian, prove they are or will become a citizen of another country, not live in Canada and not be a security threat. They must also explain in writing why they don't want to be a Canadian any more.” -Reuters, 8/20/2013

I hereby renounce my citizenship in the nation of Canada. While I do not recognize the authority of Canada’s government, I understand you require me to explain my reasons for wanting to sever ties to your so-called country. Frankly, it is Canadians who ought to explain why they want to continue being citizens. But I will humor you, if only for your own edification.

I do not believe that God makes mistakes. He may, however, be guilty of the occasional oversight, and surely my birth in a frozen northern wasteland was one of them. I was meant to be born where all decent men are born and raised: the great state of Texas. It is currently August in Texas, and the average noontime temperature is approximately one hundred fifty-seven degrees, which strengthens a man’s moral fiber and resolve. I do not know the current temperature in Canada, but I assume it is below freezing, and that everyone is huddled inside igloos, because your country is backwards and terrible.

I am told that you love maple syrup and offer your citizens free health care. Maple syrup is nothing more than nature’s failed attempt to make its own barbecue sauce, a task assigned by God to man, not trees. Free health care is an attack on a person’s fundamental right to live free from the oppression of a government that would interfere with your choice to be driven deep into poverty by accident or illness. It is un-American, which is the worst thing a country can be.

You are ruled by a queen. Please continue to deceive yourself that her power is ceremonial. One day Elizabeth, who is apparently immortal in defiance of all that is natural and holy, will decide she wants dominion over her empire again. I hope you like Corgis, because you are two decrees away from mandatory ownership.

Your flag is a leaf. A leaf. A large portion of your population speaks French.

I understand that many of you own guns; however, you do not talk about them nearly enough. Hockey seems like a reasonably masculine endeavor, which is why America has taken most of your teams. Perhaps you can start some kind of lesser hockey league, equivalent to the CFL, once we have imported the remainder.

Your so-called entertainment, on the other hand, is something no God-fearing decent person would want to be associated with. I shall not call Lorne Michaels or Carly Rae Jepsen my countrymen. (I’m 50-50 on the Trailer Park Boys. They show a lot of gumption and entrepreneurial spirit.)

Canadians often appear normal, like Americans, at first glance. But they are pale and wan, and can usually not speak more than a short phrase or two before their accents reveal them as foreigners. They are squirrely and inherently deceptive.

America is the greatest nation on earth, thanks to Ronald Reagan, and like him our people are robust and full of health. Any person who has even a remote chance at American citizenship would leave his family and spit on his native flag for the opportunity to be cradled in the warm comfort of our liberties. I sir, am an American, and have been since the day I was born. Not a fiber of my being nor an iota of my character carries the dark stain of Canada, the accidental place of my birth.

I renounce thee, and heap curses upon your lands.