Why Is Barack Obama Politicizing The Presidential Medal Of Freedom? 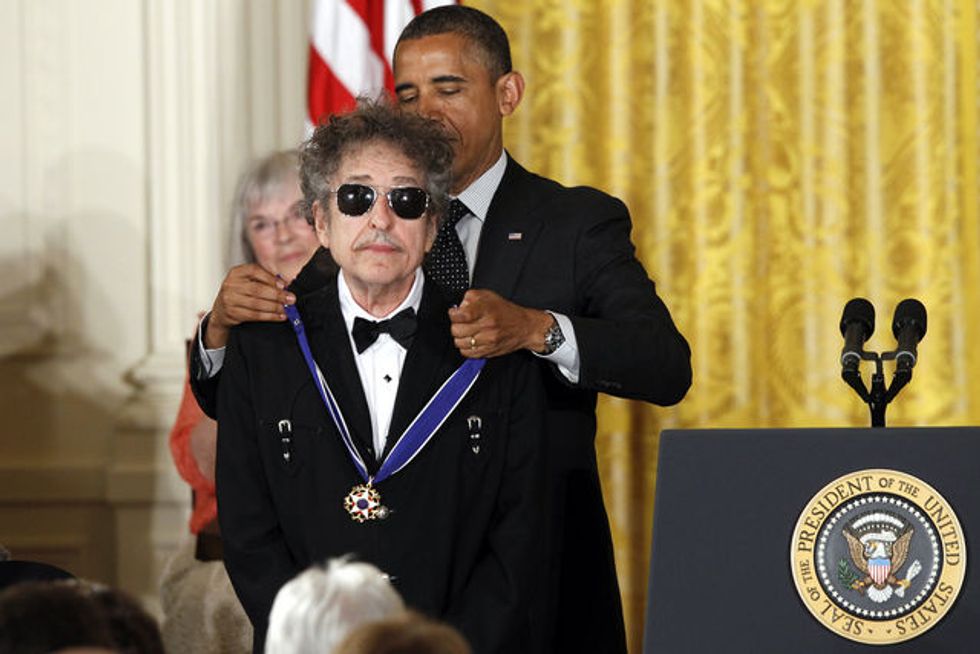 There we were, trying to find stupid Donald Trump or someone on the teevee -- because this is our life, people. This is our life. And all of a sudden, there was Barack Hussein NOBAMA!!! hanging a medal around the neck of OG farmworker hero Dolores Huerta. It was no stupid Donald Trump, but we guessed it would have to do! The fun thing about the Presidential Medal of Freedom is the president gets to personally pick his or her (haha right) heroes, and while we imagine it's also VETTENINGED to death by his or her (haha right) staff, it still gets that personal flava. ALSO it is fun in an election year to put on our Politico hat and decide that everything is a baldly partisan bid to shore up constituencies, and so you have your Dolores Huerta ('Spanics), your founder of the Girl Scouts (girls), your John Glenn (Ohio, the moon), your Toni Morrison (awesome old ladies with Medusa hair), your Shimon Peres (Jewishes), your Bob Dylan (hippies, boomers, jerks who think it's cool to wear shades to your Medal of Freedom honoring), your Madeleine Albright (girls, Jewishes, secretaries of state). And then there was Pat Summitt.

"Come see this lady, she hates Obama she can't even look at him!" someone shouted to her little brother, who rushed right in. "Nah mang, that's Pat Summitt, she's the lady John Wooden, she's THE BEST," someone's little brother explained. There was something really wrong with her, he couldn't remember what -- Parkinson's? MS? -- and then the announcer explained it: Summitt has early-onset Alzheimer's, and then there was a big Michelle Obama-style arms-enfolding hug, and nobody hated anybody, and lots of people (not saying who) watched it three times in a row, and cried so much.

You might note that Your Wonkette has not addressed the unholy flap that ensued past midnight in Poland because Nobama honored an officer in the Polish Underground who brought world attention to Jews being slaughtered during WWII and mentioned "Polish death camps," when he should have called it a "'German death camp in Nazi-occupied Poland,' to distinguish the perpetrators from the location."

Polish Foreign Minister Radek Sikorski called it a matter of "ignorance and incompetence."

The Poles believe this is a terrible slur against Poland. Your Wonkette thinks it takes considerable chutzpah and/or balls to be more offended that Treblinka was called "Polish" than that it existed. Your Editrix, as a Polish-Russian Jew, thinks Poland can go fuck itself.