Why Is Harry Reid Giving His Monkey Friends All The Good Drugs? 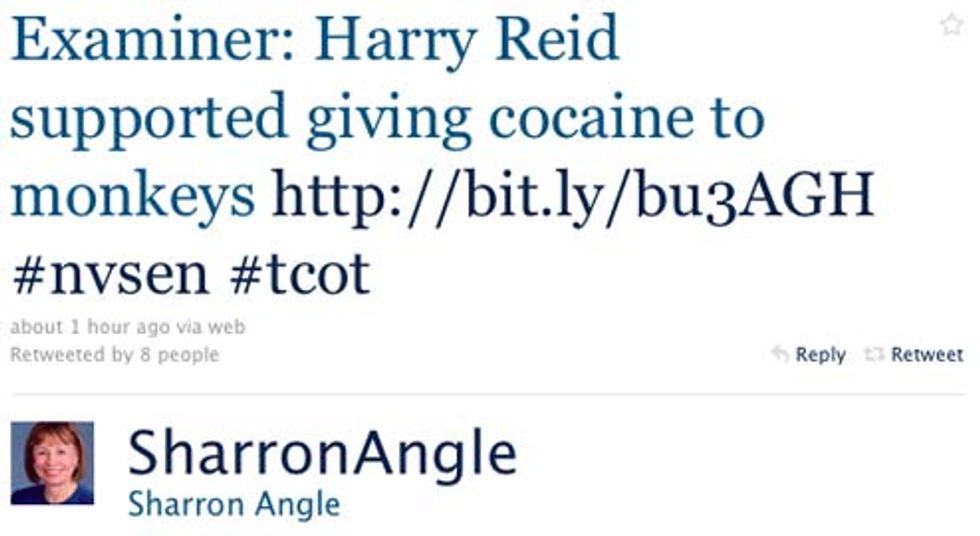 By all rightsSharron Angle's Twitter feed ought to be a nonstop stream of hilarity, full of death threats and theological lunacy and pleas for friendship, but in practice whichever intern has been put in charge of it is heroically clinging to sanity, mostly just posting links to press releases and Angle's occasional appearances before the lamestream media. This right here is pretty good, though! Why did Harry Reid vote in favor of giving cocaine to monkeys? Doesn't he know that this is an issue specifically reserved to the states, by the 10th amendment?

In case you even wondered for a single second, the monkeys in question were research subjects in a study at Wake Forest about cocaine addiction that was in part funded by the stimulus bill. This research was highlighted in a report that John McCain and Jim Coburn wrote about wasteful stimulus spending, since the only thing those guys hate more than science is paying for science. Presumably someone in one of their offices forwarded it to the Washington Examiner, and then Sharron Angle's Twitter-intern ("Twintern"?) saw it on the Internet. And this is the best part of the story, because you can imagine this poor person, sitting around the Angle campaign office, bored, so bored, clicking on links, trying to feed the Twitter beast, and suddenly he or she sees "Harry Reid" and "monkey" and "cocaine" in the same sentence, and she or he says, "Oh my God, best Twitter link of the day! Of the week!" And then the afternoon got a little brighter. (If you think your Wonkette editor is feeling something of a kinship for this person right now, you are correct.) [Sharron Angle's Twitter/ABC]