Why Would Donald Trump Rail Against 'Foreign Corruption' Law? Well, Why Wouldn't He? 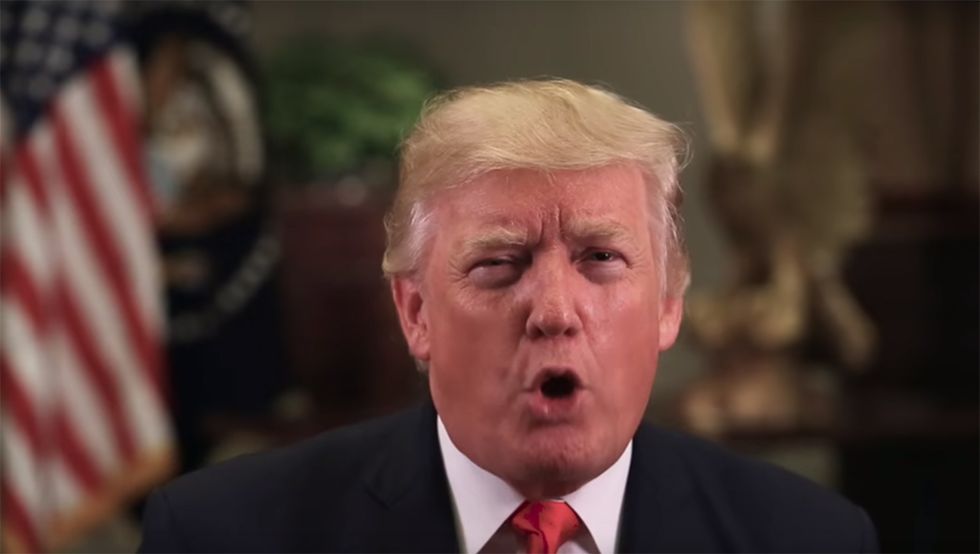 Wonkers, check out this amazing live footage from the Seekrit Chat Cave!

So, forgive us for backtracking, but we were so busy chasing after the Morongate tennis ball, and then the Fucking Morongate ball, that we completely missed the one that said President Trump Super Pissed That American Companies Can't Pay Bribes In Not America. Which seems like a ball worth chasing!

In the same New Yorker article that detailed Sad Rex's fall from King of Exxon to The White House Apprentice most likely to be You're Fired next week, Dexter Filkins included this anecdote.

In February, a few weeks after Tillerson was confirmed by the Senate, he visited the Oval Office to introduce the President to a potential deputy, but Trump had something else on his mind. He began fulminating about federal laws that prohibit American businesses from bribing officials overseas; the businesses, he said, were being unfairly penalized.

Sure, it's not exactly news that Donald Trump cries sad tears for the poor American businessmen who get their allowances docked for greasing foreign palms. He's been complaining about the Foreign Corrupt Practices Act (FCPA) since 2012, at least.

What are we prosecuting people to keep China honest? Now every other country goes into these places and they do what they have to do. It's a horrible law, and it should be changed. I mean, we're like the policemen for the world, and it's ridiculous. [...]

You'll do business nowhere! Every other country is doing it, and we're not allowed to. So, it puts us at a yuuuge disadvantage.

How can American companies do business overseas without paying bribes? UNPOSSIBLE! But what might have gotten Donald Trump worked up about the FCPA in 2012? Well, the good people at the New Yorker have the answer to that one, too!

The Trump team swears that they all squeezed their eyes shut and hummed The Star Spangled Banner when the shady shit went down. So no harm, no foul, right?

Alan Garten, the Trump Organization lawyer, did not deny that there was corruption involved in the project. “I’m not going to sit here and defend the Mammadovs,” he said. But, from a legal standpoint, he argued, the Trump Organization was blameless. In his opinion, the Foreign Corrupt Practices Act doesn’t apply to the Baku deal, even if corruption occurred. “We didn’t own it,” he said of the hotel.

“No, that’s just wrong,” Jessica Tillipman, an assistant dean at George Washington University Law School, who specializes in the F.C.P.A., said. “You can’t go into business deals in Azerbaijan assuming that you are immune from the F.C.P.A.” She added, “Nor can you escape liability by looking the other way. The entire Baku deal is a giant red flag—the direct involvement of foreign government officials and their relatives in Azerbaijan with ties to the Iranian Revolutionary Guard. Corruption warning signs are rarely more obvious.”

But, hey Vanky! I'm sure Daddy appreciates you running point on this one.

Davidson followed up in August with another New Yorker piece on Trump's attempt to blight the Black Sea Coast with The Trump Tower Batumi in the Republic of Georgia. The article is fuckbonkers amazing, and you should go read it! You will be FOR SHOCKED to discover that Trump family was up to its orange eyeballs in corruption, having entered into a financing deal with The Silk Road Group, a bunch of gangsters who were flush with cash after looting $10 billion from the government of Kazakhstan. Oooopsie!

As usual, The Trump Organization had their best people on the Batumi project.

In 2010, when a Trump Organization executive, Michael Cohen, began negotiating with the Silk Road Group about licensing Trump’s name for the Batumi tower, Ablyazov was facing eleven lawsuits in the U.K. The Kazakh government, which had indeed seized control of B.T.A. Bank, had sued him to reclaim ten billion dollars that he had allegedly siphoned out of the country. [...]

It would have taken only a Google search for the Trump Organization to discover that the Silk Road Group had received much of its funding from B.T.A. Bank, which, at the time of the Batumi deal, was mired in one of the largest fraud cases in recent history. The Silk Road Group had even been business partners with the central figure in the scandal: Ablyazov and the Silk Road Group were two of the owners of a bank in Georgia. I asked Cohen, who visited Georgia with Trump, if he had been concerned about the Silk Road Group’s connection to B.T.A. Bank. “I didn’t even know that B.T.A. was involved in this entire scenario up until the moment you told me,” he said.

Yes, that Michael Cohen. Because if you need a lawyer too stupid and arrogant to worry about violating the FCPA and winding up in the FBI's crosshairs, Michael Cohen is your man!

Okay, so we know why the FCPA was on Trump's mind in 2012 when he went on Squawk Box -- he knew that he was up shit's creek if the feds ever started poking around in Donald Trump's Excellent Eastern European Adventures. But what about in February of 2017?

That's a headscratcher! But if we had to guess, it might be because he'd recently had those awkward conversations in January with James Comey about the Steele Dossier. You know, the one that's totally bullshit except that we keep finding out that everything in it is true? Christopher Steele was dead on about Russian hacking, campaign coordination with Russian government sources, and Trump dropping the Republican opposition to Russia's land grab in Ukraine. Anything relevant to the FCPA?

Bribes and kickbacks in emerging market countries? Like former Soviet Republics run by gangsters? Yeah, no wonder Poppy was shitting his pants over the FCPA this February! James Comey had just stuck the Steele Dossier under the old man's nose and said, IF ANY OF THIS IS TRUE, YOU'RE FUCKED. Of course he panicked and You're Fired the guy!

And in case you needed further proof that we're on the right track, enter one of Trump's unending parade of dimwitted lawyers to shout, There's definitely no body in the trunk, Officer! So you can search to the passenger compartment, but if I see you walking back there, I'm going for my gun! From the New Yorker piece on Georgia,

President Donald Trump’s attorney Jay Sekulow recently told me that the investigation being led by Robert Mueller, the special counsel appointed by the Justice Department, should focus on one question: whether there was “coördination between the Russian government and people on the Trump campaign.” Sekulow went on, “I want to be really specific. A real-estate deal would be outside the scope of legitimate inquiry.” If he senses “drift” in Mueller’s investigation, he said, he will warn the special counsel’s office that it is exceeding its mandate. The issue will first be raised “informally,” he noted. But if Mueller and his team persist, Sekulow said, he might lodge a formal objection with the Deputy Attorney General, Rod Rosenstein, who has the power to dismiss Mueller and end the inquiry. President Trump has been more blunt, hinting to the Times that he might fire Mueller if the investigation looks too closely at his business dealings. [...]

Sekulow said that “the Georgia real-estate deal is something we would consider out of scope,” adding, “Georgia is not Russia.”

NOTHING TO SEE HERE!

So, the moral of the story is simple. Forget about the tennis ball that smells like pee. Follow the one that smells like money! Because that's what Bob Mueller is doing. And from the way That Lunatic is carrying on this morning, it seems like the Special Counsel is on the right track.

Shit's gettin' weird, y'all! Please throw money at us so we can play more Connect the Dots!