Will Barack Obama Accept The Presidency? Live-Bloog Part A Zillion 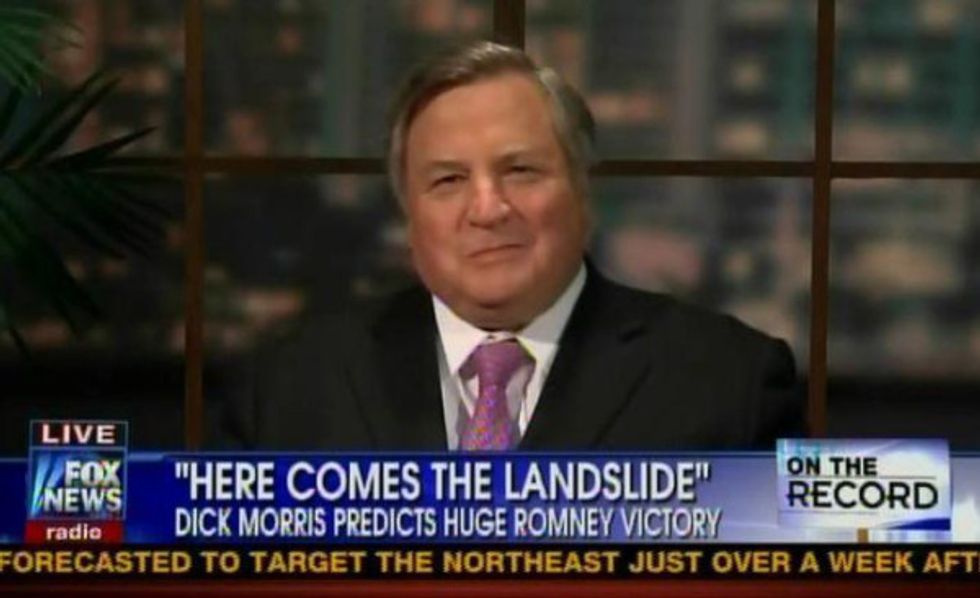 Hey, so there have been 97 live-bloog posts tonight, but this is almost certainly the last one, unless there is a Ron Paul coup, which we will certainly live-blog until the internet goes out because the FCC gets exploded.

So, barring that, we are just sitting here waiting for the president to show up and throw down some crazy Kenyan slang, on account of he never has to run for office again, and finally has that "flexibility" he was telling the Russians about, to just... to just be himself.

1:18 a.m.: John King is still playing with his superwall. President is nowhere to be found. Bachmann's race in Minnesota is still separated by like seven votes, and the Floridians have somehow forgotten to count the last 2.6 percent of the votes for Allen West's seat. Who are we forgetting about? And where is Barry?

1:23 a.m.: Mitt Romney just burrowed into his giant pile of unreleased tax returns, where he will stay until spring.

Is this an omen of things to come?

You said we'd work it out

Oh, but I'm tired of holding on to a feeling I know is gone

I do believe that I've had enough

I've had enough of the falseness of a worn out relation

Enough of the jealousy and the intoleration

Oh, I make you laugh and you make me cry

I believe it's time for me to fly

YOU HEAR THAT SHIT, HOUSE OF REPRESENTATIVES? I DO BELIEVE HE'S HAD ENOUGH.

1:30 a.m.: The tunes have switched to the Boss! But alas, it is from Wrecking Ball. Might as well have pulled a song from Lucky Town. Come on, dudes.

1:36 a.m.: The guy comes in to Stevie Wonder. He should just wave and play the song through, then walk off the stage, go home and slide around in his underwear and socks.

1:38 a.m.: The moment of truth! We find out if he really actually talks like that!

1:39 a.m.: "While our road has been hard, while our journey has been low, we have picked ourselves up." Dude is summarizing Cormac McCarthy books. Wonder when he'll move on to Outer Dark?

1:41 a.m.: "Whether you held an Obama sign or a Romney sign, you made your voice heard." Gary Johnson signs: You were lame.

Now he's talking about "every hill and every valley." This is a carnival of rhetorism.

We will not heel. We will not stop. The defeat of Barack Obama would have launched the beginning of America coming together. But apparently, liberal America prefers to battle for the soul of the country.

And so we battle.

Heavens! Yes, let us double-down, because "the only victories the Republican Party can point to since 2008 are Tea Party victories," and tea partiers defeating sane people in primaries than losing in general elections is just... how it goes, you know?

1:50 a.m.: Obama ready to "focus on your jobs, not ours," which means less now that he's done applying for jobs. But still! Sweet. He's sweet.

Dok Z. "Has anyone checked to see if Andrew Sullivan is still breathing, by the way?"

1:54 a.m.: Obama references the Jersey shore, and "leaders from every party" coming together. Did Chris Christie really just get a shout-out in the president's victory speech? What happened up there?

1:57 a.m.: Dok reports, "OK, dammit Barry, you hit the goose-bumps trigger, ya Hopey bastard." We suspect he too was slain by the "talking over the applause" move.

1:57 a.m.: Josh F.: rich i think you need to acknowledge that there is a lady bheind barry with a small american flag stuck in her hair

Josh F.: she is this campaigns greatest hero

Josh F.: "haha, i was waiting until now to give a speech that awesome just for kicks"

1:59 a.m.: That bit about "not just a collection of red states and blue states"! THAT BIT!

2:00 a.m.: And with that, the president departs the podium, to "We Take Care Of Our Own," the sweetest product placement deal of 2012, as the confetti falls.