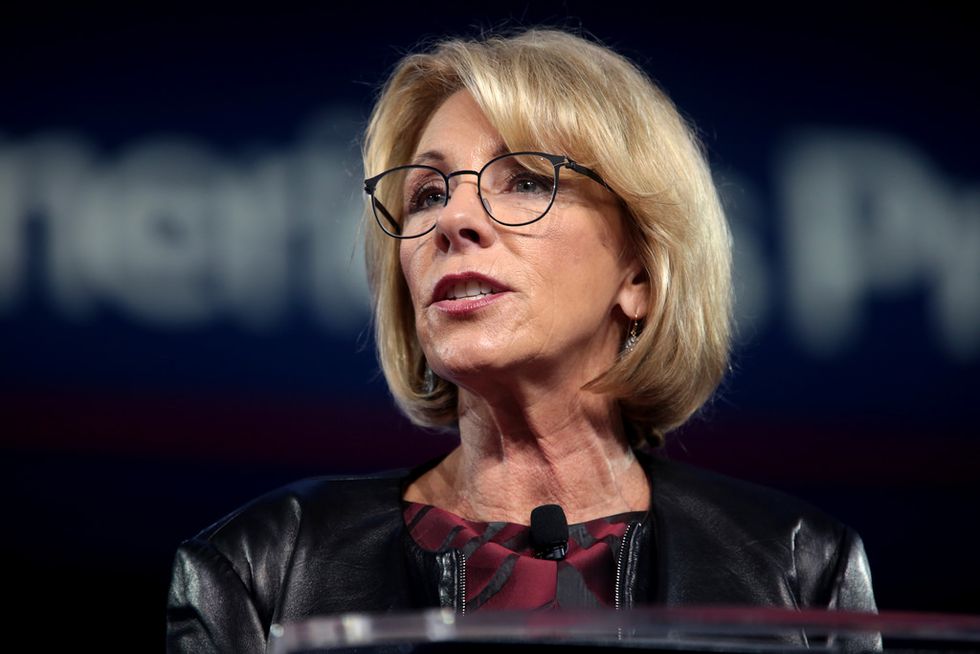 In 2011, the Obama administration issued a directive to schools across the nation, regarding the enforcement of Title IX, with regard to campus sexual assault. That directive was to “respond promptly and effectively to sexual violence against students” or risk losing federal funding. Some people, specifically men's rights activists and groups that advocate for those who say they were falsely accused of sexual assault, were very upset about this.

The directive was part of a "Dear Colleague" letter to school leaders, and issued guidance and clarification on how to deal with sexual assault accusations. Because it did not actually create any new policies, it did not go through a process called "notice and comment" in which the public may ask questions about the directive before it is made official.

Betsy DeVos, Secretary of Education And Also Bears, is expected to make a statement about this letter and other Title IX policy changes on Thursday at George Mason University. Reportedly, she will be reversing it until it goes through a "notice and comment" process. DeVos had said she planned to do as much this past July after meeting with both sexual assault advocates and men's rights activists.

"That would give the public the chance to submit comments to the department about the rules — in this case, how schools handle sexual assault cases — and let the department respond to their comments. It's a slow process that gives proponents of the 2011 directive a chance to argue for keeping the rules in place, but ultimately, the department has the final say over the future of the regulations.

Advocates for sexual assault survivors have applauded the "Dear Colleague" letter, as well as the Obama administration taking campus sexual assault seriously and holding schools to standards that have existed for nearly 45 years at this point but were not being enforced.

However, the men's rights activists opposed to this have said that part of the directive, which said that only a "preponderance of evidence" -- rather than "clear and convincing evidence" -- was needed to determine that a sexual assault had occurred, meant that schools were more likely to take the side of the accuser rather than the accused for fear of losing their federal funding. They claim this is a new policy. Sexual assault survivor advocates have, however, noted that the "preponderance of evidence" standard existed prior to the "Dear Colleague" letter being issued.

The reason the "preponderance of evidence" standard is necessary is because sexual assault is, quite frankly, not always a particularly easy thing to prove. A school, not being the actual government, does not have to prove that someone is guilty "beyond a reasonable doubt" because they are not putting anyone in jail.

While false accusations do happen, they are incredibly rare.

It is natural to fear being falsely accused of a crime you didn't commit. It's one of most people's worst nightmares, and frankly, it's why I oppose the death penalty. Because it *does* happen. It's also why "Making A Murderer" was so popular. But it just does not happen quite in the way that these advocates for the falsely accused or MRAs say it does.

The way they describe it, it is incredibly common for women to simply "regret" having had sex with a man, or to be mad about him not having called her the next day, and to then falsely accuse him of rape, even though the sex was consensual. This scenario plays into every male fear of rejection and every fantasy of female vindictiveness. The fear is less about being "falsely accused" and more about finding out that someone did not actually want to have sex with them. This is part of the reason why they get so upset over the idea of "affirmative consent" -- because if someone doesn't want to have sex with them, they don't actually want to have to know about it. They don't want to give the woman a chance to say "OH, shit, wait -- actually you are disgusting and no, I do not want to have sex with you," because she just might.

Men are more afraid of being falsely accused of rape then they are of stealing wallets, because deep down they are afraid they might have actually had sex with a woman who wasn't consenting, or can see how they would. They fear that a woman would wake up the next morning and go "Oh god, what was I thinking?" and regret having had sex with them so deeply that she would go and report it as a rape.

But men's secret fears of their own repulsiveness can't dictate how sexual assault is handled on campus.

Those who, for perhaps more nefarious reasons, want to make things more difficult for sexual assault survivors on campus cynically play into these fears in order to gain support. By opening this statute up to comment, by possibly overturning it, DeVos will be making it harder for sexual assault survivors to see any action from their schools outside of "Oh, well! It's a he-said she-said thing!" And that sucks, because it's hard enough as it is without that bullshit.