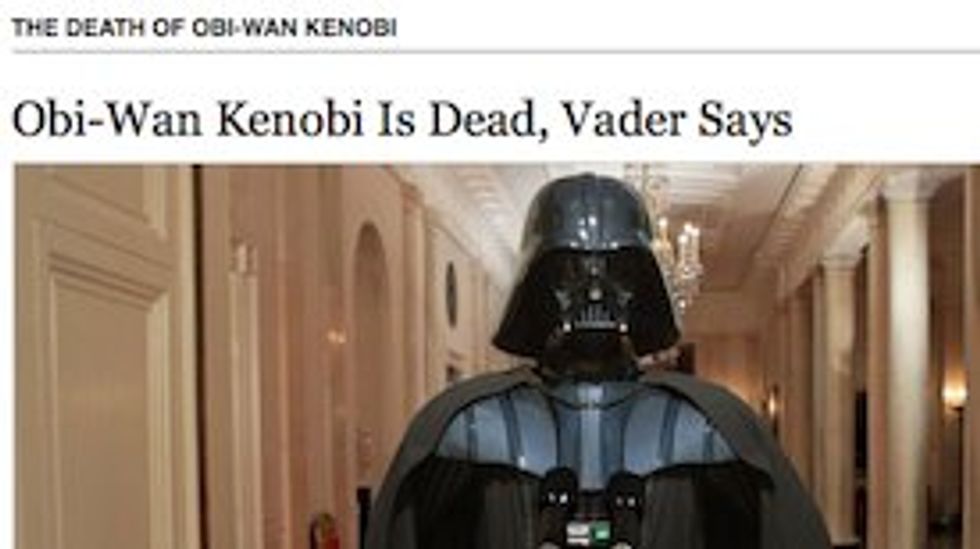 Despite theofficial story claiming Obi-Wan Kenobi was killed by our forces after being located in a remote desert compound after twenty years of evading the Empire, many people simply don't believe Kenobi is gone. Others doubt the timing of the story, especially the convenient "burial in space" -- allegedly according to the teachings of Kenobi's ancient religion. But the real question is what this means for the rebellion against the Empire. Despite the lack of a grave site that could become a shrine to Obi-Wan's followers, some say the reported killing of the old radical might actually energize the movement he once led. Could the entire Imperial System be vulnerable to, perhaps, a few fanatic pilots?

And what does it say about the Empire that so many of its far-flung territories are home to radical anti-Imperial causes? After all these years, are we any closer to crushing the rebellion? Some anti-terrorism experts say any such approach to destroying extremism must be two-tiered -- while the empire's special forces have the more exciting job of hunting down the empire's enemies, an economy based on exploitation of distant natural resources is unlikely to "win over" these populations. Our leader may be strong, but is he strong enough to defeat a billion potential rebels in every corner of our system? [Galactic Empire Times]