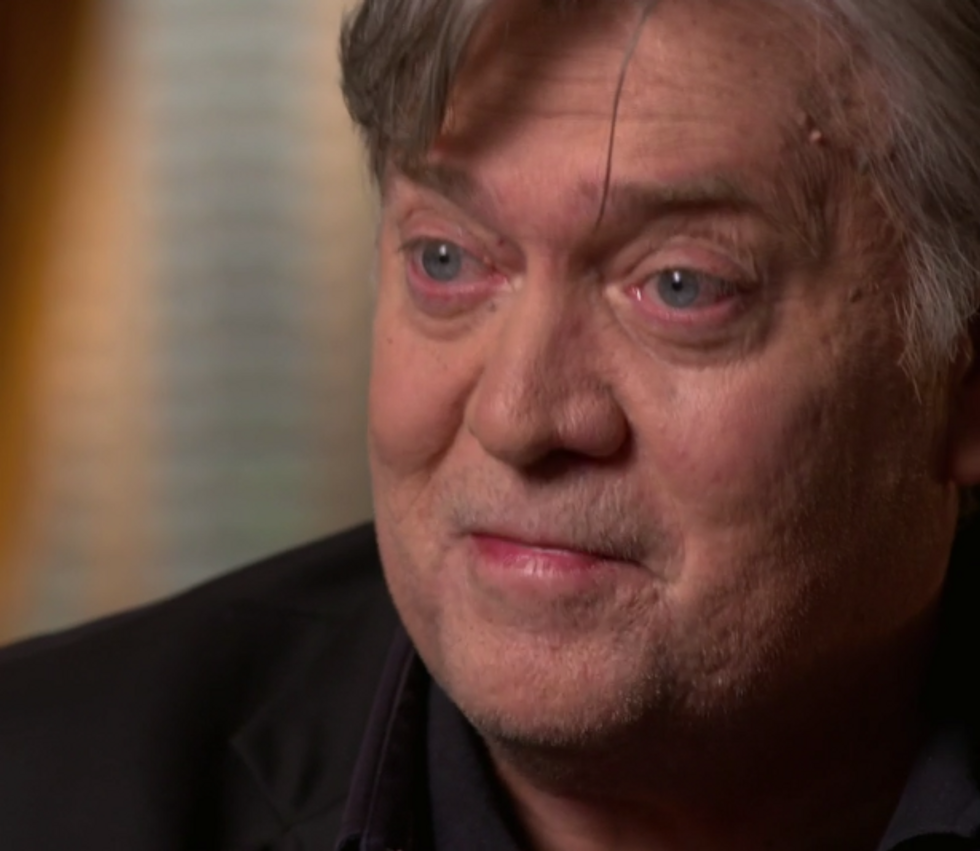 Bet he looks even worse now that he's funemployed.

In Michael Wolff's very fake book, fired Tumblr blogger Steve Bannon said he thinks Donald Trump Jr.'s Russian Trump Tower meeting was "treasonous" and "unpatriotic" and "bad shit." He also says it's "as plain as a hair on your face" that Trump and Paul Manafort and Jared Kushner and Don Jr. are allllll going to be fucked on money laundering charges in the Robert Mueller Russia probe. (Steve Bannon would know about stray hairs on faces. Probably the curly black kind that suddenly unfurl from moles, we'd imagine!) He also told Wolff he wouldn't be hiring a lawyer in the Russia probe because it ain't like HE had anything to do with all the treason, no siree, Steve Bannon is clean as a whistle!

The Daily Beast has learned that the former top White House strategist has retained Bill Burck, of the firm Quinn Emanuel. Two sources tell us Burck is helping Bannon prepare for an interview with the House intelligence committee, which is currently scheduled for next week. Sources also said Bannon plans to “fully cooperate” with investigators.

Well that's interesting! The Daily Beast reports that Bannon's lawyer is also representing Reince Priebus and White House counsel Don McGahn, but there doesn't appear to be any sort of joint defense agreement. A former federal prosecutor (our pal Popehat, oddly, who does less "national security conspiracy against the United States" law work and more "no Trump can't sue you for libel" law work) quoted by the Daily Beast says investigators will likely find it very ANNOYING that all these idiots have the same lawyer, because "it looks like they're controlling the story." To be clear, however, Newsweek reports that Burck is not representing Bannon for the purposes of the Mueller investigation like he is with Priebus and McGahn.

Bannon is testifying for the House Intelligence Committee on Tuesday, and God even knows what he's going to say. Is he going to go nu-cu-lar on Trump with all the dirty Russian dirt he knows, now that Trump made him pretend to apologize for being mean to Don Jr. and got him fired from his blogger job and his little radio show? Or will he go full-on pathetic and try to beg himself back into the president's good graces by stonewalling and trying to obstruct justice for Trump? Who even knows. How can one predict the behavior of an unemployed blogger who's probably taking even fewer showers these days than he did when he worked at the White House? (That is very few showers!)

RawStory flags an op-ed by conservative Republican strategist Cheri Jacobus, who says Bannon might be ready to fuck Trump the fuck up:

... [D]ropped by the Mercers, and by extension and formally by Breitbart, Bannon is now a man without a country, friends or home. That conveys an ominous message: Do not criticize this American president or you will be destroyed. [...]

Bannon and others who “know too much” can be dangerous to a president with a few too many secrets. Trump would be wise to heed this advice: Never put anyone in a position where they’ve got nothing left to lose.

If Bannon goes full on #Resistance and gay-bangs Trump in the Russia investigation, that will be very interesting! But please, MSNBC, even if that happens, we know the temptation will be strong, but that does not mean you have to give him a TV show. Looking at you too, CNN.

Guess we'll find out what happens on Tuesday after the closed door testimony concludes and your boyfriend Adam Schiff throws himself in front of every TV camera in the world to tell us all how shit went down.