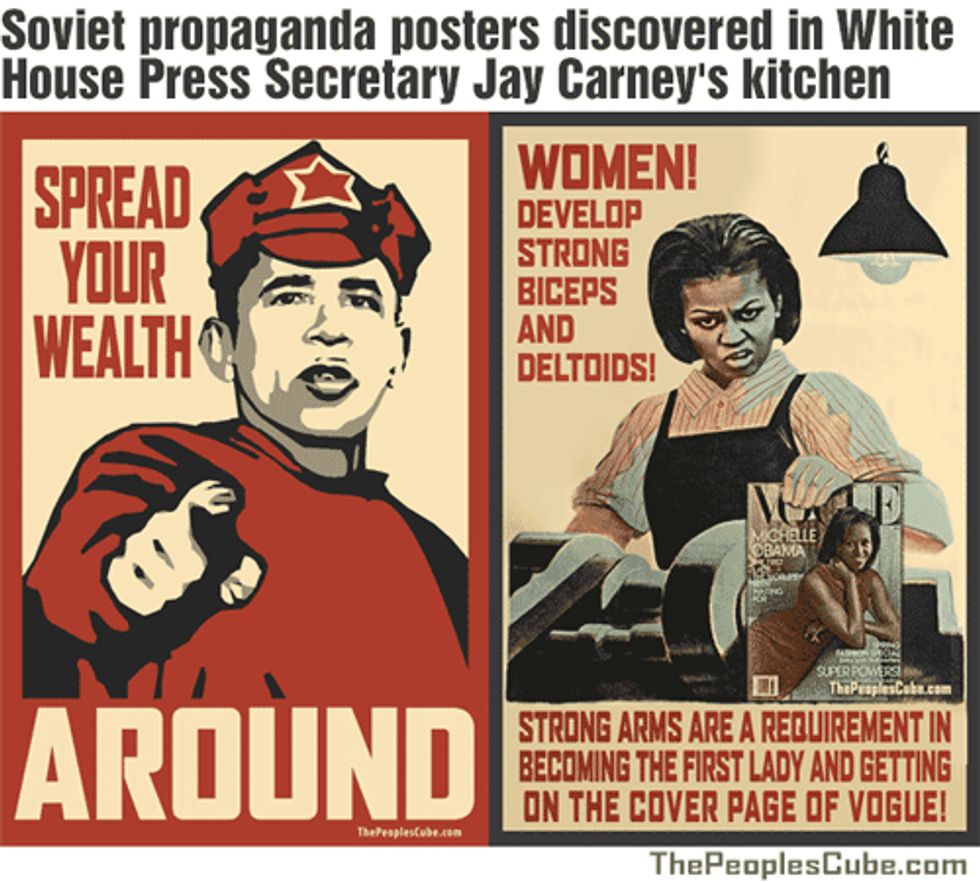 Here's the latest rightwing freakout that doesn't involve cows: Sharp-eyed observers noticed a couple of Soviet propaganda posters in the background of a photo of White House press secretary Jay Carney's kitchen that ran in a fluff piece for Washingtonian Magazine. Reaction was swift: Barack Obama is surrounded by communists who live in nice houses. Eric Owens at Daily Caller describes the photo of the Carneys' "dacha" as showing a "vast spread of fruits, meat and breads of all kinds...fit for an extended family of Slavic monarchs." Jeff Allen at Matt Barber's BarbWire asks,

Might these be collectivist subliminal messages? Or maybe it confirms President Barack Obama’s socialist/communist leanings as demonstrated in the selection of the members of his administration?

We'd really like to think they're just something Carney picked up right before the photo shoot, just to piss off wingnuts.

But yes, this is definitely a smoking gun of some kind, Inpeach, yawn, oh my goodness yes, it is pretty much over for Barack Hussein Obama and his terrifying plans to turn America into a communist hellhole just like Nazi Germany.

Here's the incredibly lavish home that Jay Carney's wife and children are hypocrites for living in:

The poster on the right (up top; it's on the left in the kitchen pic), Allen explains,

is a print of this iconic design by artist Dmitry Moor. It shows a soldier pointing his finger with a text asking, “Have YOU Enlisted?” in Russian...

March on Ame-RED-ica to the HealthCare.gov website and enlist in the “people’s” revolution!

It really is a shame that rightwing bloggers get so few chances to do comedy, isn't it? The other poster, says Allen,

features a female factory worker, which was printed on June 26, 1941, just days after Stalin joined the Allies to fight the Axis powers during World War II.

The poster depicts a woman replacing a man’s name tag with one that bears her own name, and the script commands: “Women! Learn production, replace workers who went to the front! The stronger the hinterland – the stronger the front!”

That's fairly informative, actually. And then we get to the joke, which we are sure you will find as hilarious as we did:

Carney and Shipman met in Moscow during the 1990s while he was writing for Time, and she worked for CNN. It was a match made in Marxist “heaven.”

Yep, if there's one thing that Moscow in the 1990s was famous for, it was all that fervent Marxism. Thankfully, Oleg Atbashian, a real graphic design humorist, knows that communism was no laughing matter, and that the Carneys' kitchen should have a dirt floor, and nothing but moldy potatoes and beets on the counter. He whipped up a couple of gut-bustingly amusing parodies of the posters that we are certain will grace rightwing blogs at least until the end of 2016:

Haw-Haw! We get it! "Vogue" is for pretty ladies, not big fat socialists who want to dictate our diets!

Follow Doktor Zoom on Twitter. He just realized he has no posters on his walls at all. What will he do if he's appointed to the cabinet?