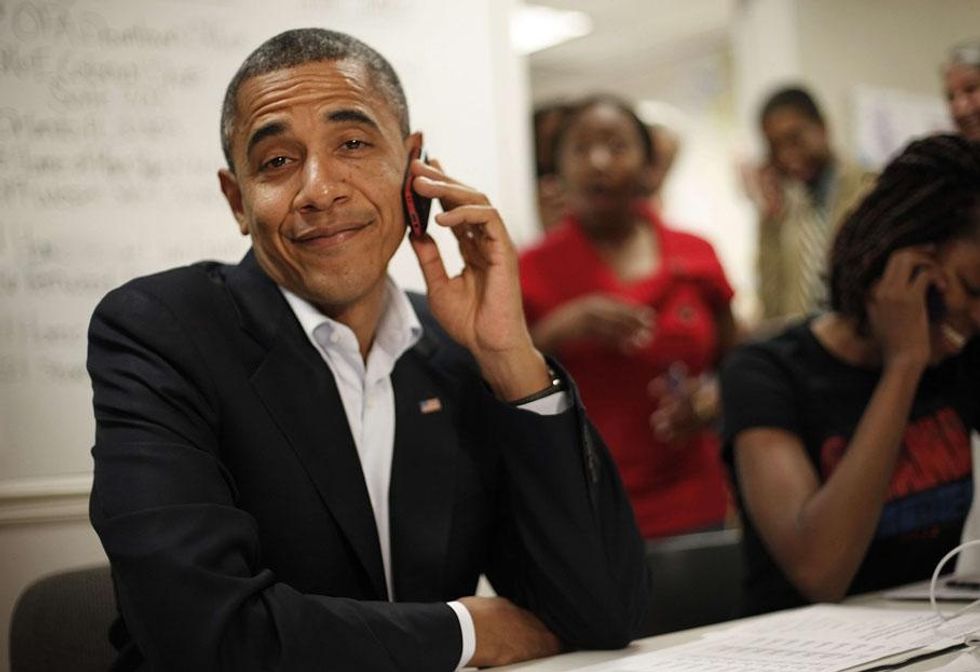 The tech-savvy wingnuts at True The Vote (a group inalterably opposed to both truth and voting) had a brilliant idea to allow their supporters to document all the dirty shenanigans and voter fraud that they just knew for sure was going on in the election this year: A week before the election, they released a cool smartphone app so people could be all crowdsourcey and make sure that no fraud went unreported. The app allowed people to report all sorts of chicanery that had to be happening at their polling places:

And what searing reports of fraud did the veritable army of patriots turn up? Not a heck of a lot, according to Right Wing Watch. While True The Vote founder Catherine Engelbrecht had promised that the app would help create “an archive that will finally pull the curtain back on the myth that there is no voter fraud,” the actual results were a tad underwhelming. Sadly,

the evidence of massive voter fraud that Engelbrecht hoped to expose failed to materialize. In the week that the app was available, users recorded only 18 incidents of election irregularities, the vast majority of which had nothing to do with True the Vote’s policy priorities.

There were eight reports of voting machine malfunctions, which is definitely not a seamless voting experience, but also not exactly an avalanche of fraud -- and if the machines weren't working, presumably the people who complained also reported them to the local election officials, one would hope. One person also reported the clustermess in Hartford, Connecticut, which led to about a dozen polling places opening late because the registrar lists were delivered late. Again, a definitel screwup, and it's being investigated, but not fraud.

And then there's the three scary "Voter intimidation" reports: one complaint about a camera in the polling place (no details on whether it was mounted on the wall or held by a New Black Panthers thug), another story of "an elderly woman who claimed a poll worker snatched her ballot out of her hands when she was done with it," which sounds rude but hardly a wave of fraud, and finally, this terrifying eyewitness account of intimidation:

Again, there's so much more we wish we knew -- did she look uppity, or even siddity? Did the voter get access to smelling salts or a fainting couch after the horrifying encounter? Was Fox News alerted? Did any of the 200,000 voters disenfranchised in a single county in Texas by voter ID have any sympathy for this poor victim?

Exactly one alleged case of "voter impersonation" -- which is why we desperately need Voter ID -- was reported: Somebody in Iowa said they received a call about a rejected absentee ballot, but had never submitted one! The reports were anonymous, but we bet that the voter was named "James Smith."

And finally, there was this frightening story of voter fraud that wasn't fraud at all, but an example of government inefficiency in Ohio -- and one that could be solved through same-day registration, one of the voting practices that fans of restrictions on voting want to get rid of:

Obviously, the solution is to make voting even harder. And, of course, to repeal Obamacare.