Wingnut Radio Host Bryan Fischer Still Nattering On About The Pixels, The Pixels 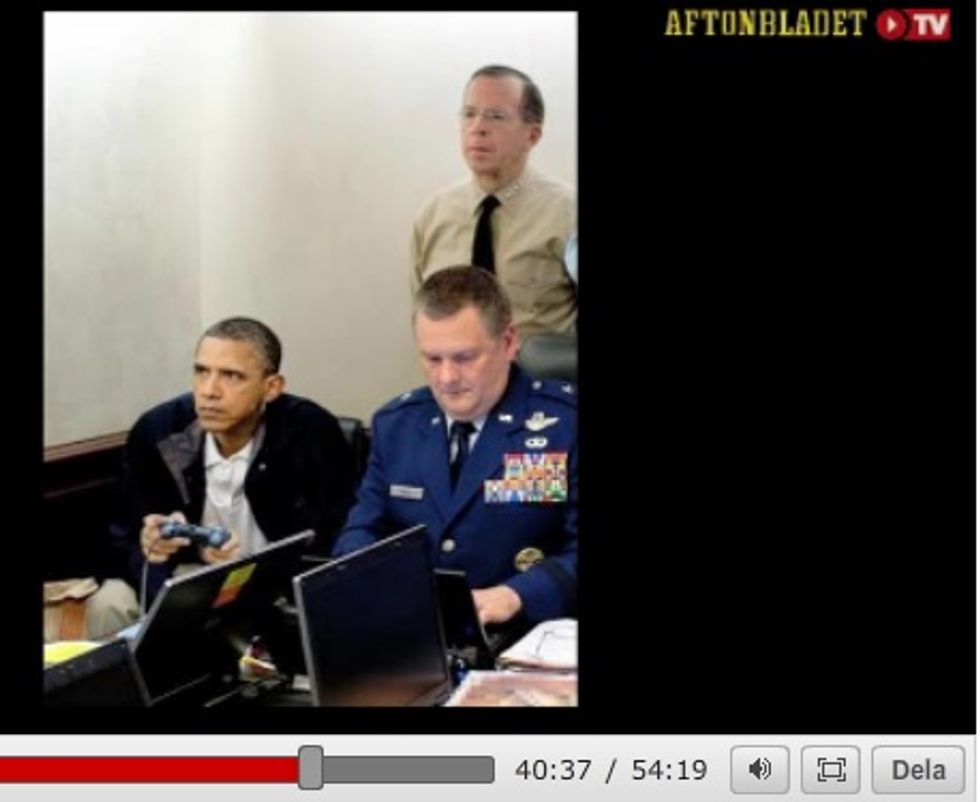 The American Patriarchy Association's Bryan Fischer believes in resurrection, so on Thursday's edition of the Bryan Fischer Balderdash Radio Hour he brought back a conspiracy theory from two years ago: the claim that Barack Obama was photoshopped into a photo of the White House Situation Room on the night he singlehandedly didn't murder Osama Bin Laden. In a grand convergence of derp, Fischer was repeating a claim originally made in 2011 by Jim Hoft, the Stupidest Man on the Internet. But that's OK -- once a loony idea escapes into the wild, it lives forever.

In Fischer's expert opinion, the picture has to be a fake because Obama's head looks "too small" in comparison to the other people in the room. That's the evidence. Fittingly enough, this is mostly just a matter of Fischer ignoring the concept of "perspective." Fischer's intuition is that Obama was worried that the raid might fail, and didn't want to be seen in the Situation Room if it did; once the raid succeeded, he told the White House media team to photoshop him into a corner of the picture so he could take credit for other people's work. But Obama's expert image manipulators weren't smart enough to fool Bryan Fischer. That's just logic!

This conspiracy claim was kicked off in 2011, when Jim Hoft, inspired by a post on Free Republic, decided that a Swedish video about people photoshopping funny stuff into the photo was actually a story about the original photo being fake. Hoft reproduced the Swedish headline, with the translation "Do you see what is wrong with this picture?"

Of course, what was wrong with the picture is that Sad Keanu was not in the Situation Room. Hoft then pretty much starts making stuff up:

What’s wrong with this picture?

The Swedish news agency, Afton Bladet, is telling us to

“Look closely, the picture from the White House ‘Situation Room’ in connection with Bin Laden’s death holds an impressive error … Can you detect it?”.

They say Obama was photoshopped into the picture. AB insists that the president was just way too small in the picture. It must be a fake.

While we don't speak Swedish, it doesn't appear that the Afton Bladet piece says anything of the sort. You can hear the host saying "meme... m-e-m-e," and then the video shows a bunch of altered photos while the hosts laugh at them. (The photos are also reproduced in this Atlantic piece.) Hoft later updated his piece with yet another bit of brilliance, claiming that the Swedish video had "mocked the White House" by adding Keanu to the picture. Had he watched for a couple minutes more, he probably would have announced that Obama was also playing video games during the raid.

Little Green Footballs did a pretty good dissection of what Hoft got wrong -- that would be "all of it, Katie" -- but his post was enough to set off further speculation, including a lengthy "analysis" by birther expert Mara Zebest.

And now Bryan Fischer has brought it back once more, because in the Wingnuttospere, no idea is ever truly debunked. We can only be thankful that Fischer won't be joining Hoft in Los Angeles this weekend for the Big Rage-A-Palooza; if these guys ever came into physical contact, it could trigger a Derp Singularity.