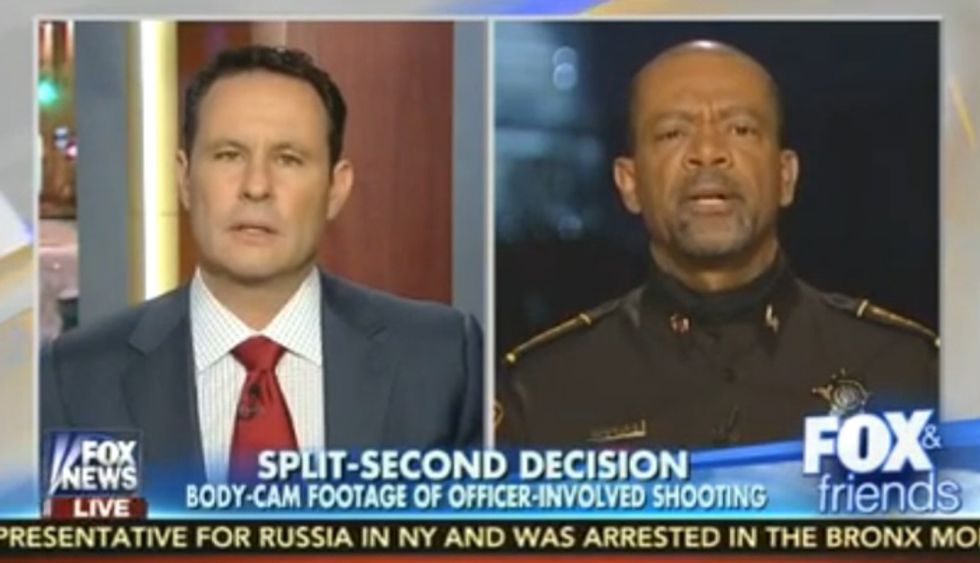 David Clarke is the sheriff of Milwaukee County in Wisconsin, and he has been a hero to Wingnut America ever since he ran radio ads a couple years back encouraging people to arm themselves instead of calling 911. On Tuesday, he played to his real constituency, the Fox News audience, when host Brian Kilmeade asked Clarke to comment on yet another shooting of a black suspect by a police officer, and instead launched into a rant against the NAACP and single black mothers.

So, the background stuff: In Muskogee, Oklahoma last week, a police officer shot Terrance Walker to death after Walker ran away while the officer tried to arrest him. Walker appeared to pull and then discard a gun, which is apparently why he needed to be shot, and a local NAACP representative, Pleas Thompson, said that the incident reflected a "shoot first, ask questions later" culture among police, and that police should have tried to take Walker alive. And so Fox invited Sheriff Clarke to offer his opinion, because Clarke is a reliable source of rightwing quotation fodder -- back in December he rightsplained that Michael Brown had chosen to live as a thug and "was a co-conspirator in his own demise.”

After claiming that the NAACP had said the police "should have asked questions first" instead of shooting Walker (which is maybe a bit different from what Thompson actually said), Kilmeade asked Clarke to comment on the police video of the shooting. Clarke took a moment to declare the shooting a "good shoot," and then got to the really important stuff: trashing the NAACP.

This once proud organization that was a force for good has relegated itself into irrelevancy, and I challenge anybody to name the last significant accomplishment that the NAACP has achieved in the United States for people of color -- I would say it was probably the 1964 Civil Rights Act. Since then, this organization has become nothing more than a political propaganda entity for the left. So let's break this down in terms of what the NAACP should be focused on, and they can get this discussion started in the black community because we need to have it, and it's the behavior of our young black men.

That's quite a lot to get out of a brief body cam video! Clarke went on to review the particulars of the crime. Walker had apparently been stalking a former girlfriend and a pastor at a church had called the police when Walker showed up with a gun. All of this seemed to suggest to Clarke that the NAACP needs to fix all these dysfunctional young black men:

The number one cause of this is father-absent homes. So what are we going to do in terms of having more effective parenting, more role modeling, more engaged fathers in the lives of these young black men so that we don’t have this behavior?

Yeah, NAACP! Why do you keep blaming the police for shooting black men, when the issue is clearly single mothers? And for that matter, why wasn't the pastor packing heat himself, so he could have shot Walker himself and not bothered the police, who undoubtedly had important things to do?

Noting that Walker's mother had said that she thought the police didn't have to kill her son, Clarke managed a pretty good zinger:

"Well, what did his dad say?” Clarke laughed. “You know, we always hear what his mom says. You know, look, mom loves her son, we all get that. But shoot first and ask questions later -- anytime a law enforcement officer is in a situation where a gun is introduced by a suspect, yeah, it’s shoot first, stop the threat, and then ask questions later. And also, when you run from the police, I’ll tell you right now, you’re headed toward a very dark place where things are not going to go well for you.

Maybe the NAACP could at least work on teaching all the young black men, who are thugs mostly, because they don't have male role models like Sheriff Clarke, that they shouldn't run. It would be a real start. Stupid NAACP, allowing black single moms to not raise their kids right.