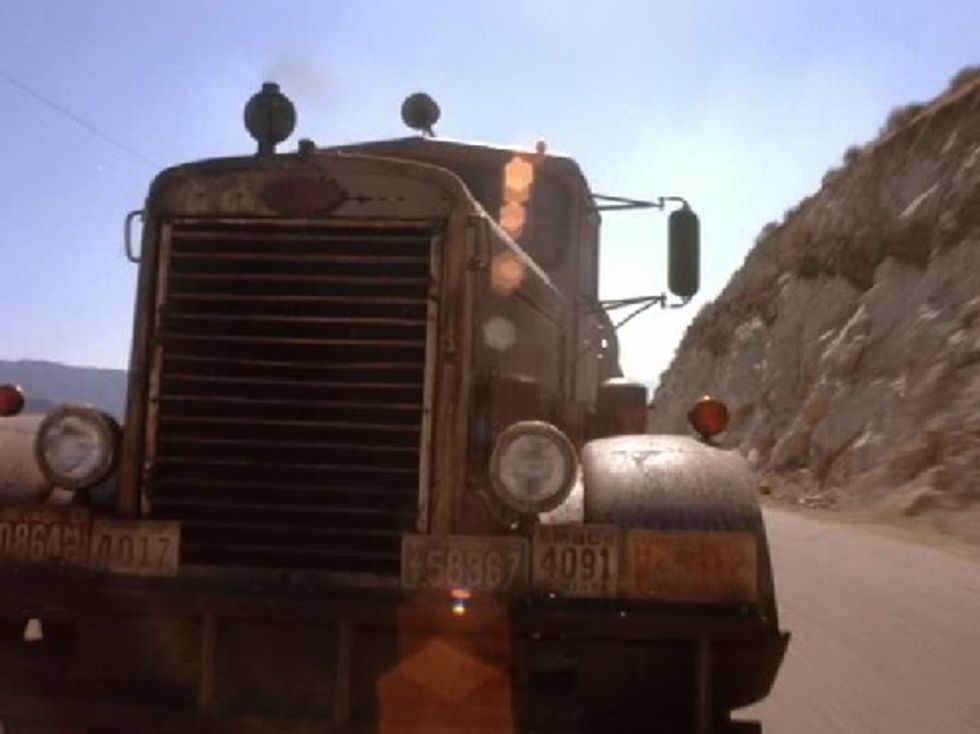 We have an important update to ourearlier story about the Great Big Siege of Washington D.C. that some wingnut truckers have planned for this weekend. They're still about 977,000 trucks short of their goal of a million truckers, but if the 3,000 truckers who RSVP'd as of last week actually do show up, that's enough to seriously muck up traffic in the nation's capital. Earl Conlon, organizer of the "Truckers Ride For the Constitution," told U.S. Newsthat the goal is no longer to seek Barack Obama's impeachment:

That's a lot more simple and direct! You gotta like a group that stays so focused on a realistic, achievable goal.

Oh, and speaking of staying focused, it appears that the whole "general strike" that was going to completely "shut down America" is no longer A Thing; the Facebook page that we'd linked to in our earlier article is gone, and the focus of the protest is now going to be a big parade of trucks circling the Beltway Friday through Sunday, blocking all but the left lane, which they will generously allow emergency vehicles to use. The U.S. News article notes that "Truckers to Shut Down America" is now merely "the event's original name," and has been reduced to the acronym "T2SDA," which DC commuters will have to display on their vehicle if they want to be allowed to drive on the Beltway at all. The eleven longhaired friends of Jesus in their chartreuse microbus had better keep that in mind.

And, of course, there's the arresting everybody in gummint, too. You have to give credit to reporter Steven Nelson for keeping a straight face while typing this up:

Conlon cited the idea of a citizens grand jury -- meaning a pool of jurors convened without court approval -- as the mechanism for indicting the officials.

"We want these people arrested, and we're coming in with the grand jury to do it," he said. "We are going to ask the law enforcement to uphold their constitutional oath and make these arrests. If they refuse to do it, by the power of the people of the United States and the people's grand jury, they don't want to do it, we will. ... We the people will find a way."

It's almost certain that anyone attempting to "arrest" a member of Congress would be arrested themselves for attempted kidnapping.

In our earlier piece, we'd copypasted the organizers' original statement that Barack Obama had to be tried for treason because Benghazi and Seal Team 6 and "Louis Learner" and all the muslims in gummint, plus fuel prices, too. By yesterday's U.S. News piece, the charge sheet had -- surprise! -- changed a bit; now Conlon insists that

Obama committed "treason" by allegedly funneling weapons to al-Qaida-linked rebels in Syria. Members of Congress who support arming Syrian rebels, Conlon said, are accessories to the alleged crime. He identified House Minority Leader Nancy Pelosi, D-Calif., and Sen. Dianne Feinstein, D-Calif., as politicians he will seek to arrest for alleged acts against the Constitution.

Again, we congratulate these folks on their admirable consistency. By Friday, we expect we'll be hearing that Obama and Congress committed treason by closing the WWII Monument and making the Greatest Generation sad.

Conlon's goals, at least when speaking to a reporter, seem modest enough, just a resolution to use Any Means Necessary:

"What we want to do is go in nice and peaceful and keep it as peaceful as possible... but if they decide to get ugly with us we're going to do what we have to do," he said. "If all I get is one or two congressmen walked out of there in handcuffs, that will be a shot across the bow that will ripple across all branches of government. ... I hope they are all civil enough and brave enough to step out onto the congressional steps."

On his own website, Conlon shares a few additional thoughts:

Because really, what matters most to these guys is making sure they know who needs to be shot. But don't worry, there's no incitement here -- the only want to be ready when Obama declares "Marshal Law."

This looks to be an interesting weekend in Washington. Will the Million (3000) Truckers get in the way of the Million (something less than that) Veterans? Thanks to Louis Farrakhan, every other gathering of nuts is now a Million Something March, and that just grinds our gizzards -- Yr Wonkette hereby calls for a Million Nitpicker March to arrest someone and try them for treason against English. This anti-semantic aggression will not stand, man.