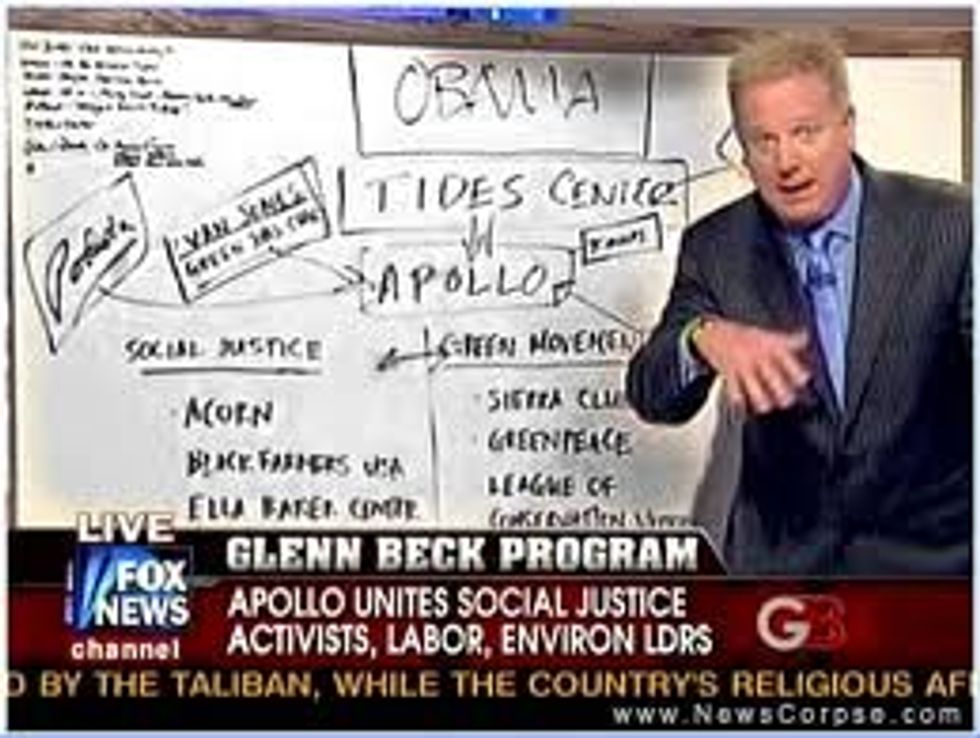 Uh oh, there is trouble in right-wing-asshole paradise! Look how mad WND is at Ghost Andrew Breitbart for stealing all its shit! This is the sound of a riding glove meeting a soft hairless cheek!

Editor’s note: In 2008, WND thoroughly vetted President Obama’s radical background. Many of those original exclusive reports, almost entirely ignored by the establishment news media, currently are being utilized four years later by some media outlets in the lead up to this year’s presidential election. From now until election day, WND will present its original investigations into Obama and his radical ties with bonus updates. These reports are as important today as they were in 2008. Following is the first in a series of articles aimed at re-vetting Obama.

Anyway, what's the NEWEST REVETTENING? Well, we are ashamed to say that our reading comprehension is unfortunately not quite up to the task of diagramming the layer upon layer of guilt-by-association and guilt-by-guilt that makes up these proto-Glenn-Beckian ravings. Some people knew some other people who were influenced by a fifth person who once read something or sat on a panel with Studs Terkel, right? (Right.) So you COULD SEE why they'd be so mad at Ghost Breitbart for jacking their vibe.

This one says Valerie Jarrett, the president's confidante, is a Communist MOLE, probably, we think, who was planted early on to report on Obama? Or lead him to the Fifth Column? IT IS NOT CLEAR.

Was Valerie Jarrett, one of President Obama’s closest advisers, introduced to the president’s political circles by her father-in-law, a communist sympathizer who worked with the radical Obama mentor Frank Marshall Davis?

Jarrett’s father-in-law, Vernon Jarrett, was an associate of Frank Marshall Davis, the controversial labor movement activist who has been identified as an early influence on Obama.

Vernon Jarrett and Davis worked together in 1940 in a Communist Party-dominated organization, the Citizen’s Committee to Aid Packing House Workers. The group’s own correspondence, previously uncovered by the New Zeal blog, describes its communist influence. Many of its leaders were tied to the Communist Party.

The pair also frequented the SouthSide Community Art Center, which was dominated by communists. In addition, Davis and Vernon Jarrett worked in the late 1940s on the communist-influenced, black-run Chicago Defender newspaper.

It goes on like that pretty much forever. Fucking white people love stealing shit so much, they even do it from beyond the grave. Boooo. [WND]