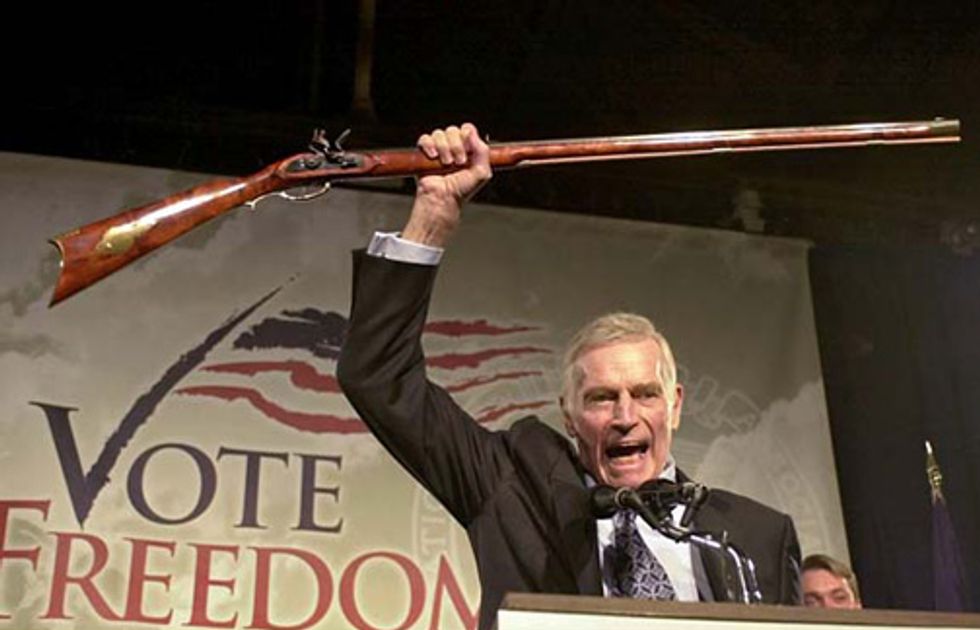 Hey, Wonkenheimers, remember after the Newtown school massacre, when the great American gun-fondling community told you to all shut up about gun control, because “too soon,” and “anyway, this is just a mental health problem”?

And remember when B. Barry Bamz (D-Gungrabberistan) tried to re-implement some weentsy, window-dressing, gun-control measures like magazine-size restrictions, and was told in no uncertain terms to fuck off with that noise, because “this is just a mental health problem”? Remember that?

Well, then, you probably thought the Patriotic Second Amendment Patriot Minutemen Wolverine Patriots would have been thrilled Friday when Obummer announced his NEW dealio to try to stop school shootings, by allowing more mental-health reporting into the gun-buying background-check database. Also, he issued a second executive order extending the ban on gun purchases to those ordered by a court to outpatient mental health care, as well as the involuntarily institutionalized, which would catch guys like the Virginia Tech shooter. You probably thought that, didn’t you?

HAHAHAHAHAHA, you are such libtard suck monsters! Oh, you kill us, with your belief in logical consistency, and faeries and whatnot.

The Gun Fondler’s Association of ‘Murica is NOT pleased with the Kenyan Usurper’s sneaky, back-door plan to deprive paranoid schizophrenics of their Second Amendment Freedoms, oh, no, they are NOT.

Groups like the Gun Owner’s Alliance and the Firearms Coalition (motto: "The NRA is a bunch of bed-wetting pansies") were quick to point out that the devil (Obama) is in the details (our paranoid fantasies), and that big gubmint is the LAST institution that should be trusted to create and enforce so-called “laws” and “regulations.” After all, if some liebural activist judge tells someone with hallucinations and paranoid delusions that he has become a danger to himself and others, and therefore must be ordered to see a psychiatrist and submit to anti-psychotic medication AND not own guns, then anyone who gets a DUI and has to take a driver-safety class will ALSO have his guns taken away, QED. Also, what about medical privacy??!!!

As savvy Fox News commenter “shortybus” put it, “So, I'm sitting in rural Iowa. I have a Federal Firearms License. Now I will be able to tell how many times you refill your Prozac. Great!” Truer words were never spoken by someone with a more fitting Internets handle.

The National Rifle Association is withholding comment so far, because weekend.