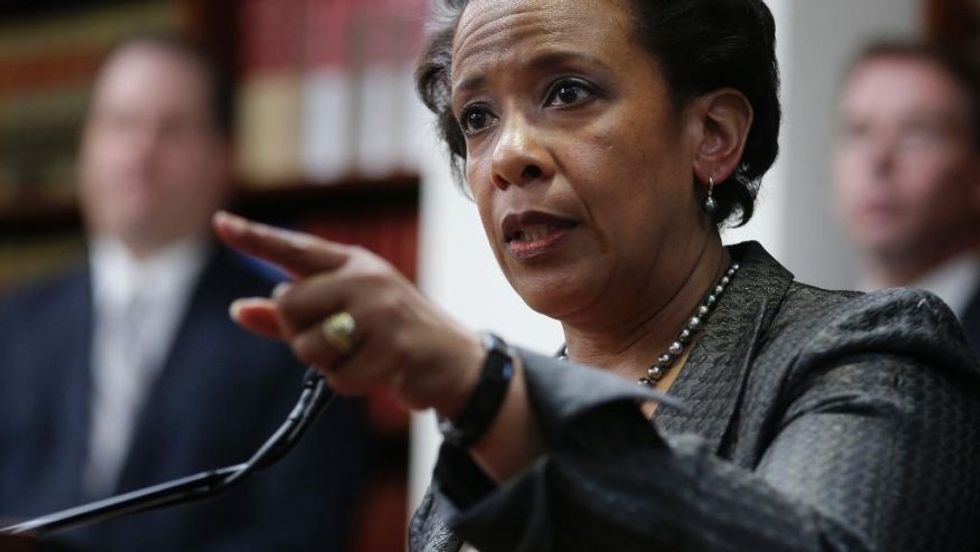 Oh, Loretta Lynch, you are going DOWN. A press release from a group calling itself "Frontiers of Freedom" has the goods on a gigantic scandal involving attorney general nominee Loretta Lynch. Or at least the 25 rightwing groups that signed the press release hope so. Allegedly, says the release, Lynch "may have violated the rights of crime victims while making plea deals with defendants in so-called 'white collar' cases." Oh dear, that sounds serious indeed! We wonder if maybe it's related to her time defending the Clintons during the Whitewater case! [contextly_sidebar id="aB7UHoFeay2rJD8MUqnJjVlsUBMH5igg"]

While the press release isn't especially clear on what Lynch is supposed to have done wrong, that's hardly the point, as the release states that this (whatever this is) "is emblematic of a larger problem – to wit, the failure of the executive branch to enforce laws as written, and indeed the deliberate circumvention of the laws as written.”

The story has been making the rounds on rightwing sites, with perhaps the clearest summary at NRO. The claim is that, in exchange for cooperation in fraud cases, the U.S. Attorney's Office for the Eastern District, which Lynch leads, maybe let a pretty sleazy fraud guy, one Felix Sater, strike a deal that kept his involvement in several other crimes secret. Or at least that's what an attorney who's been suing the Justice Department says. It's either an enormous scandal proving that Lynch is unfit for office, or maybe a rightwing attempt to find anything to use against her.

Supposedly the wrongdoing is that Lynch's office failed to comply with federal law and notify victims of one of Sater's schemes that a plea deal had been reached, which might have violated the Crime Victims' Rights Act by preventing victims from seeking compensation. Of course, even the "Frontiers of Freedom" release acknowledges that the plea agreement took place in 1998, before Lynch was even in office, but she is still a crimer because, she kept covering up all the many misdeeds of her office. If there were any, which seems a bit dubious, considering that the Supreme Court has denied a petition to force the release of records in the case -- but maybe that's just proof of how deep the cover-up goes! And so a plea deal from 1998 is one more indication of just how corrupt the Obama administration is.

It also doesn't help that the press release is so badly written that it appears to have been copied and pasted from some other source. It references "Mr. Sater" twice without ever giving his first name or any context as to what he supposedly did, although it does include the ominous (and similarly unexplained) accusation that the case may involve "grave issues of prosecutorial misconduct -- to wit, the failure to disclose Brady materials.”

Failure to disclose Brady materials! Can you imagine? We're betting it was the cursed Tiki idol, or maybe Peter's science fair volcano.

Among the signatories to the letter are several passionate opponents of white-collar crime, like Tea Party Nation, the Christian Coalition, The Tea Party Net, the American Family Association, and Gun Owners of America, which is renowned for its vigilance on crimes involving the investment banking sector. The press release doesn't exactly strike us as the sort of thing that will excite a lot of calls for Loretta Lynch's head, but then again, we never would have predicted that Benghazi could have been elevated into a greater scandal than Watergate and Iran-Contra combined.