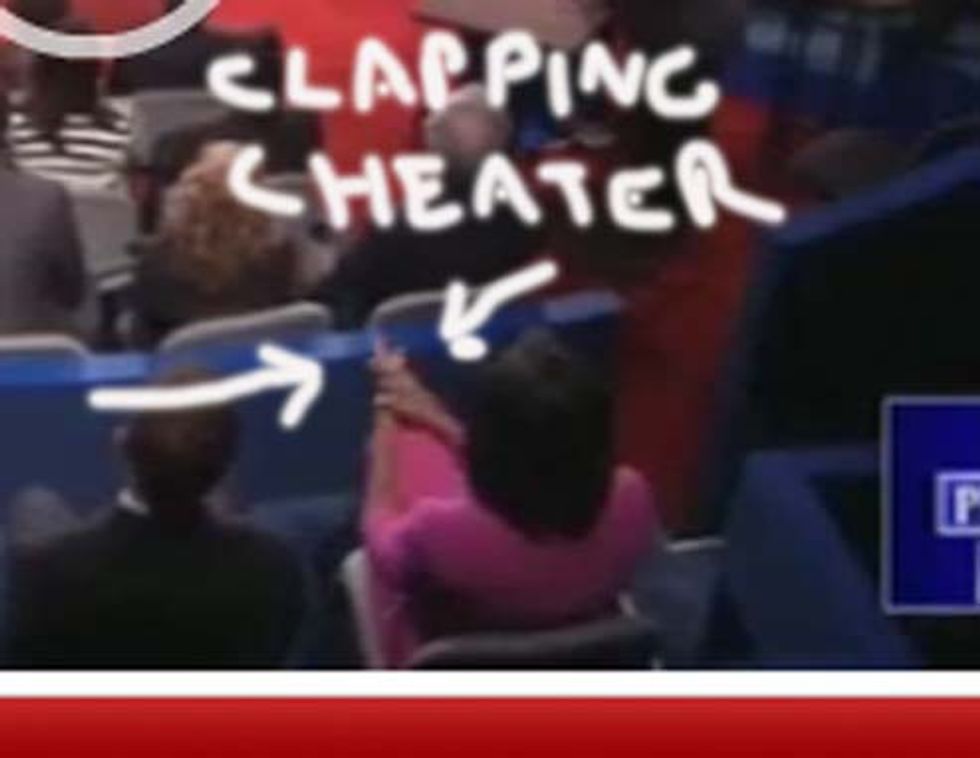 Sorry, liberals, you probably thought that Barack Obama won the debate on Tuesday or whatever, BUT: just as sometimes you can retroactively have your Olympic medals taken away for cheating with drugs, or have winning football games turn into losses more than ten years after the fact due to a little child rape, so too can you lose a debate when it turns out that you had a biased accomplice in the crowd clapping for you, like Barack Obama did. How can you trust your assessment of Obama's victory, now that you know that his wife was influencing your decision-making skills, with her magical clapping?

You will remember all the ludicrous coin-based rules that determined all the weird little details of how the debate would be run. But there was one law that so was iron-clad that no coin toss could overturn it: the "participating debate audience," which means the people sitting down front that you could see on TV, most of whom made up the pool of potential questioners, were supposed to remain absolutely silent unless called upon. We shan't have this debate degenerate into vulgar hooting of the sort you'd hear on The Arsenio Hall Show!

Nevertheless, the unwashed masses sitting in the outer darkness clapped and cheered when Candy Crowley semi-corrected Mitt on the whole "did Obama say the word 'terror' which is obviously much more important than any actual concrete details about the Benghazi attack" business, because they're big fans of fact-checking we guess. The participating audience was mostly obedient and silent, though -- with the exception of one Michelle Obama, as you can see in the incriminating (and non-embeddable) video grab from Fox News on Real Clear Politics. This is why you thought your Messiah won, libs: you saw that nice lady clap and then, BOOM, your mind instantly filtered out all of Romney's cogent arguments about whore-moms and their AK-47 toting bastard babies.

Conservatives are predictably super outraged about this, and Politico has collected their rage, if you feel like hate-fapping to it. We will concede that, since Michelle Obama broke the rules by clapping, it would have been only fair if Tagg Romney had been allowed to punch Obama in the face. As it is, Team Romney had to settle for Josh Romney's unsuccessful attempt to make the President's head explode with his mind. [RCP]