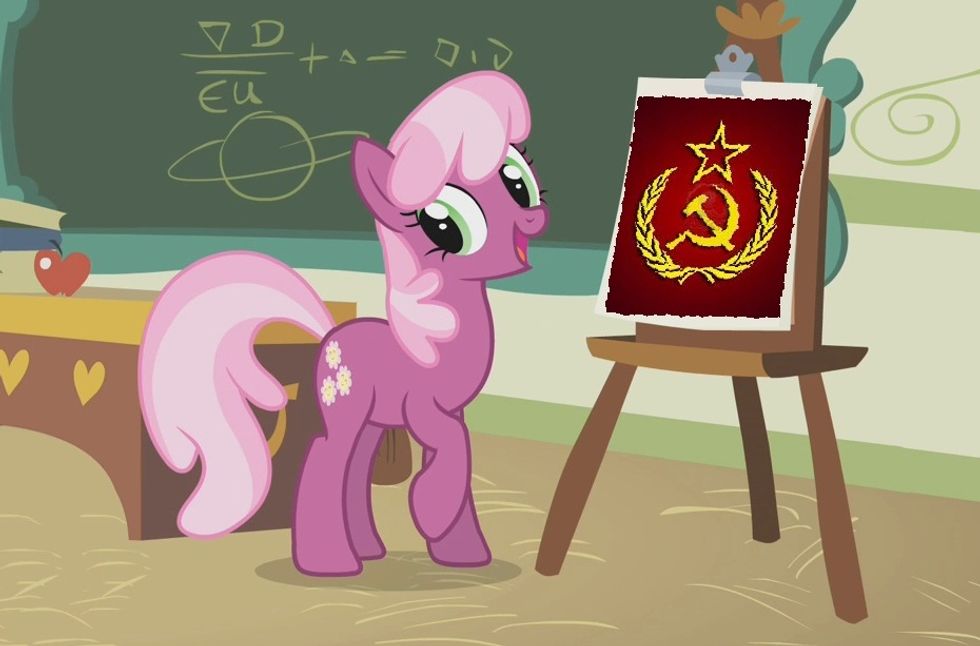 Pity the poor children of Texas. Not only do they have to live in a state full of Texans, but many of them are at high risk of growing up to be Texans, too. Oh, and on top of that, they are constantly being bombarded bycommunist propaganda in their Texan-run schools, because apparently only communists get Texas teaching credentials. Thankfully, Texas Patriots have access to the Interwebs, and so they can expose the government schools for what they are: indoctrination factories brainwashing innocent children with the UN's communist, pro-Muslim Agenda 21, with its FEMA Camps and bicycle paths.

The latest dispatch from the culture war is a doozy, because it involves 6th graders being ordered -- at Barack Obama's behest, of course -- to "design flags for a new socialist nation." Clearly, this exercise in which children must think of a flag other than Old Glory can only be sinister. After all, this is the very same online curriculum that was previously investigated for signs of Muslim Bias! (And, OK, was found to actually be biased toward Christianity.)

Thanks to some very angry constituents with three brain cells and a broadband account, the Texas Senate Education Committee is now holding hearings on the CSCOPE curriculum that includes the outrageous lesson, and they have heard some pretty shocking stuff!

One witness compared the system to "mind control," and an algebra teacher wept as he described quitting because he felt he was "aiding and abetting a crime" by using CSCOPE in his classroom.

Witnesses repeated the claim of pro-Islam bias, as well as the charge that CSPCOPE presents the Boston Tea Party as a “terrorist act” (as we noted previously, it actually suggests that the British would have seen the Tea Party as terrorism, while the colonists would have seen it as civil disobedience. Nuance is scary!)

The claim about the flag exercise seems to be about equally valid. The lesson's text says this:

Well, that right there can only mean one thing, which is that children are being told that socialism is the best way of life and that they should immediately overthrow their capitalist oppressors! State Sen. Larry Taylor was clearly worried about the implications:

"Does that sound like we're sympathizing with those types of countries?" He later said he found the lesson plan "very egregious as a Texan and an American."

There is absolutely no way that this lesson could possibly involve, say, encouraging kids to think about how propaganda works, or about how symbols reflect deliberate choices on the part of those using them, or any of that "critical thinking" stuff. That cannot possibly be the case, since Texas has taken a firm stance against critical thinking.

We remember that Kid Zoom had an assignment a little like this when he was in 7th grade. His class read Machiavelli's The Prince -- teaching Machiavelli to middle-schoolers is either dangerous or maybe redundant, we aren't sure which -- and then the kids had to plan out an imaginary country and the political and economic system it would have. We don't recall a flag, but there was definitely papier maché involved, which is dangerously Frenchified. And yet somehow, the kid came through the experience without too much obvious damage.

Although the article about the Education Committee hearings didn't mention how the CSCOPE folks replied to Sen. Taylor, we do rather hope that maybe someone pointed out that the flag lesson does not end with, "Now tear down the Stars and Stripes, shit on it, and do everything you can to bring about the Glorious People's Revolution!"

We will close with a meditation from Amanda Marcotte; while she was thinking specifically of "defenders of creationism" here, we think it applies just as well to parents freaked out by any mention of socialism or Islam or criticism of America-The-Greatest-Nation-The-World-Has-Ever-Known:

they clearly don’t think of children as people in their own right, but instead property that you use to enact your ideological obsessions.