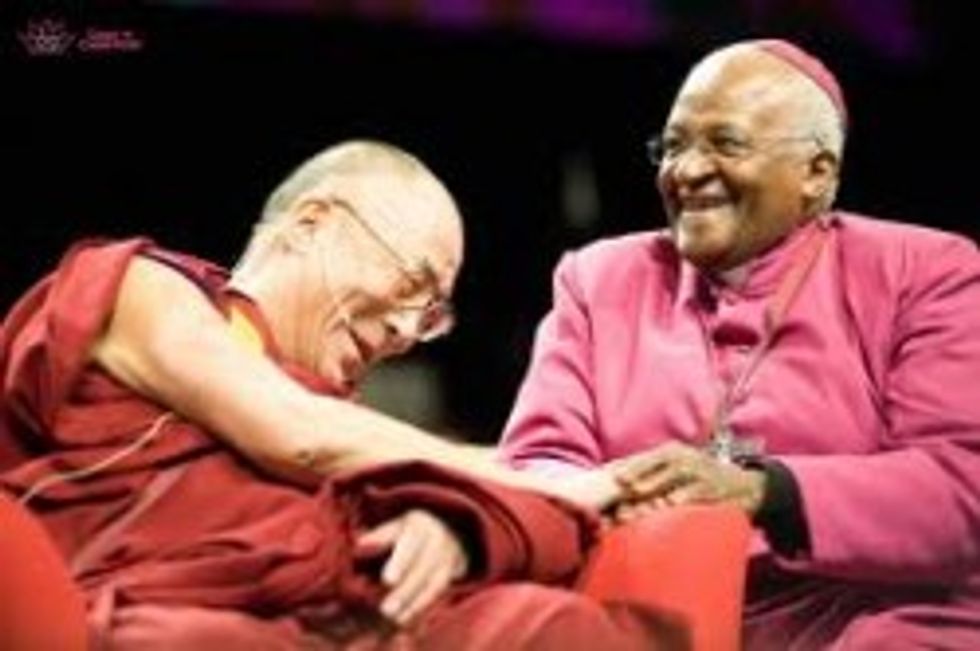 You guys, we did not know this wasa thing?

So in addition to being the moral force behind the ending of Apartheid in South Africa, Archbishop Desmond Tutu is awesome in every other possible way as well! Here, read some more!

Tutu has also been outspoken in his affirmation of the homosexual agenda. “If God, as they say, is homophobic, I wouldn’t worship that God,” he has said. Tutu has also said he was “saddened” and “ashamed” of the negative reaction to the ordination of the openly homosexual Vicki Gene Robinson as an Episcopal bishop in 2003. Six years later, he supported the Church of Scotland’s decision to ordain non-celibate homosexuals.

Hmmm, how else is Archbishop Desmond Tutu at war with the Catholic Church?

In his book God is Not a Christian, he wrote that Christians should not claim “possess all truth” but rather “be ready to learn…from the techniques of the spiritual life that are available in religions other than our own.” He has long supported women’s ordination.

So Archbishop Desmond Tutu believes exactly what Your Editrix's commie nuns the Sisters of Notre Dame at La Reina High School believed (let's see, what did Sister Mary Claire say? Oh yes, every religion is a path to God; then they showed us Romero, because of how they were communists). Burn, excommunicate, repeat. And then please to dig up Mother Teresa and burn her while you are at it, as she communistically did not charge people money when she nursed them through their Plague.

The Ghost of Andrew Breitbart has not yet weighed in on Desmond Tutu War on Catholicism, or Barack Obama's learning how to make eternal war on Catholics at his old black knees. Also: birf certicate. [LifeSiteNews, via RightWingWatch]