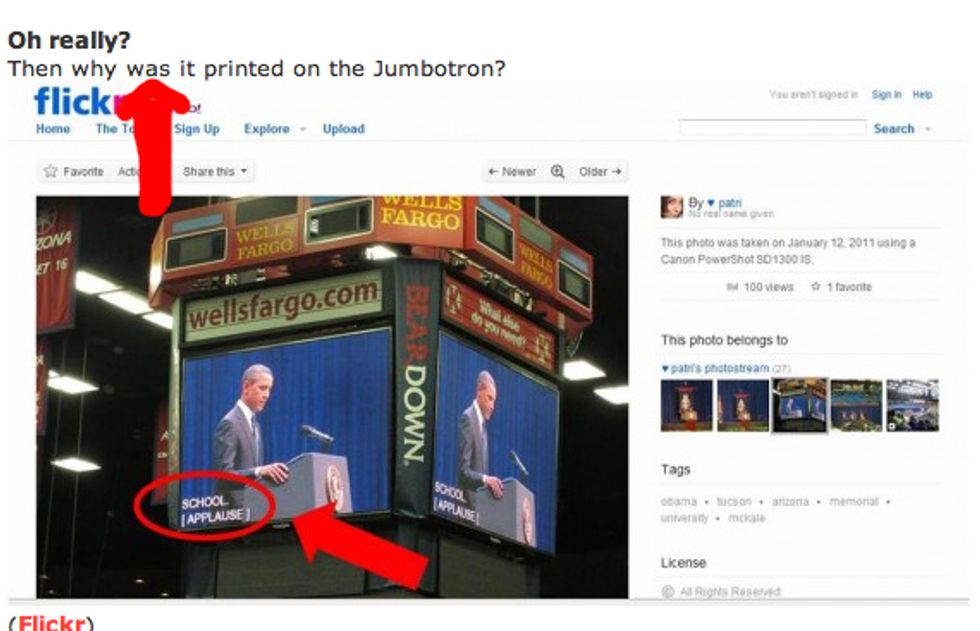 It has taken some time, but Gateway Pundit figured it out! We now know why those rowdy, unassociated college kids whooped and cheered every time they heard the words "University of Arizona" ("mourning"), at the memorial in Tucson last week: The president's Jumbotron told them to applaud! It certainly couldn't be that these wingnuts don't understand the concept of closed captioning, right? Oh.

If Obama had really wanted to get the crowd to cheer, obviously he would have spoken about our shared love of beer pong. And if he wanted to get political, he would have compared Democrats and Republicans to beer-pong partners fighting over how to re-rack the cups instead of trying to sink them. "And you know what happens when you bicker? China nails a bounce. And then it's two cups."

If the wingnuts didn't have those annoying college kids to focus on, they may have had to admit that Obama's speech was actually really good. Haha, nevermind. They would have just complained about that shaman guy. "America is COWBOYS, not INJINS."

Sure, the White House probably should have held the event in a smaller location, without a bunch of unassociated college students who pregamed "THE PRESIDENT IS HERE!" and cheered at weird times. But on the other hand, it's hard to fight ignorance. [Congratulations on all the traffic you're getting, Gateway Pundit]