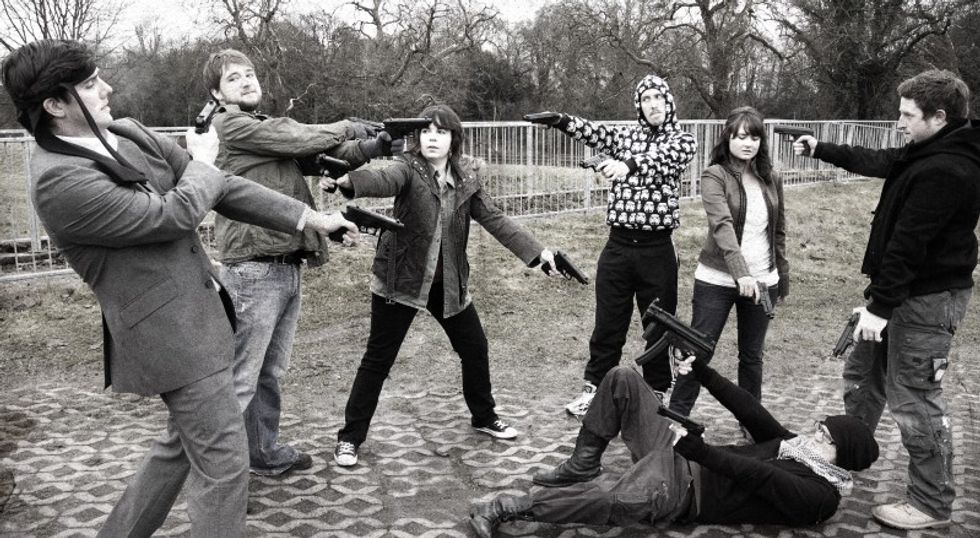 Heya Wonkers! We would like to have words with you. Or rather, a word with you. And that word is "cuckservative," which is the hot new catchphrase of Summer 2015. Expect to start seeing it everywhere soon, and also to be completely fucking sick of it by September. What exactly cuckservative means depends on who you ask, but the one thing that everyone agrees on is that it's a portmanteau of "cuckolded" and, duh, "conservative," and that it started being flung gleefully around the Twitter machine about a month ago, mostly but not exclusively by supporters and fans of Donald Trump. And it's used by True Manly Conservatives to mock Republicans who have let themselves be co-opted by the Establishment, which is hopelessly tainted by feminized liberalism. Also, depending on who's using it, it may be -- probably is -- proudly affiliated with racism and nativism. Or as Joan Walsh explains in Salon:

“Cuckservative,” you see, is short for a cuckolded conservative. It’s not about a Republican whose wife is cheating on him, but one whose country is being taken away from him, and who’s too cowardly to do anything about it.

OK, that’s gross and sexist enough already, but there’s more. It apparently comes from a kind of pornography known as “cuck,” in which a white husband, either in shame or lust, watches his wife be taken by a black man. [The Daily Caller's Matt] Lewis explains it this way: “A cuckservative is, therefore, a race traitor.”

This is not merely a new way to shout “RINO.” It’s a call to make the GOP an explicitly racist party, devoted to the defense of whites.

We should note here that Lewis was defining it as part of a warning to good non-racist conservatives to reject the term since it is so very ugly. Oh, and the term is often proudly anti-Semitic, and gets flung at rightwing supporters of Israel like Mike Huckabee, too. Here's an example from our internets image searching:

White nationalist Richard Spencer explained to WaPo's Dave Weigel that the term perfectly describes most of the mainstream GOP:

Also too, Spencer whitesplained why so many Trump supporters like the term, and why some see Trump as the man to defeat cuckservatism: "a) he is a tougher, superior man than 'conservatives' (which isn’t saying much), and b) he seems to grasp the demographic displacement of European-Americans on a visceral level."

Charming, no? But not all of the term's users agree that it has to be racist, necessarily. It could merely be mirthfully sexist, a slur on Washington Republicans deemed not manly enough in their commitment to True Conservativism. At Dead Brietbart's Home For Self-Satisfied Dog Whistling, Milo Yiannopouos wrote a stirring defense of cuckservative as a perfect term for the Manly Culture Warrior of Today, under the mellifluous headline "‘Cuckservative’ Is a Gloriously Effective Insult That Should Not Be Slurred, Demonised, or Ridiculed." (Yep, complete with that effete British spelling of "demonized.") Yiannopoulos simply will not have this fine slur slurred:

The drama started on July 22, when Rush Limbaugh referred to critics of Donald Trump as “cuckolded Republicans.” A day later, Red State’s Erick Erickson said the term was “coined by white supremacists” as a “slur against Christian voters.” This was echoed by a Daily Caller columnist, and then reported on in the liberal New Republic. By then, the internet was on fire with allegations that “cuckservative” was a racist term [...]

Here’s my verdict: all the writers above are wrong. As someone who’s been covering web culture and online memes for years and who has a great deal of respect for how well many right-wingers have taken to internet culture, I’m slightly embarrassed by my fellow conservatives’ inability to understand a term that returned to popular use not on white power websites, but on 4chan.

It's kind of awesome, we think, that this internecine rightwing spat has already generated a revisionist history of the term, seeking to cleanse it of its racist roots. And that Yiannopoulos would cite freaking 4chan, that self-proclaimed online hive of scum and villainy, as evidence that the term isn't tainted by racism.

Yiannopoulos thinks it's a pretty nifty term that True Conservatives definitely should use, although he hasn't adopted it himself just yet:

It’s easy to see why “cuck” makes such a good insult. It’s a byword for needlessly relinquished manliness, for selling out and caving in. The original metaphor of watching your partner getting slammed by another dude now simply means abandoned principles and a lack of backbone. It’s a byword for beta male or coward.

So no, it's not racist, he's arguing, it's merely sexist and patriarchal, and we like that. And it's perfectly fair to use against a bunch of defensive RINOS who are afraid of REAL conservatives, which is why Louie Gohmert needs to be Speaker of the House and Eric Cantor was a liberal who needed to be ousted.

Not surprisingly, the term has been embraced by prize-winning journalist Chuck C. Johnson, who insisted at Taki's Magazine -- that bastion of nonracist racism -- that "'Cuckservative' isn’t about race but about how much power you allow the word “racist” to have over you[.]”

As Joan Walsh points out, the unrepentant white nationalists aren't at all happy about "defenses" that strip cuckservative of its essential racism like Yiannopoulos does, noting that Richard Spencer insists,

The #cuckservative meme doesn’t make any sense without race. It’s all about race…What’s powerful about #cuckservative is that it is call for a racially conscious politics -- and not the kind of shot-gun spray muckraking that Johnson specializes in.

Isn't it nice to see wingnuts fighting each other over just how racist and sexist they should be? It's the sort of fine calibration a political movement needs to give careful thought to if it hopes to prevail over the wimpy feminized establishment. The only thing about this that we don't like is that it's making us feel a little sorry for Jeb! Bush and Rand Paul. Here are a few more hilarious examples from the internets:

We're not sure, but we think those might be a little racist, just possibly. In any case, it is so nice for Yr Doktor Zoom to put his PhD in Rhetoric and Composition to use now and then with a look at how these nice folks are using language, and to note that the best description of this internecine fuck-tussle is a "Mexican Standoff." Not that there's anything wrong with that.