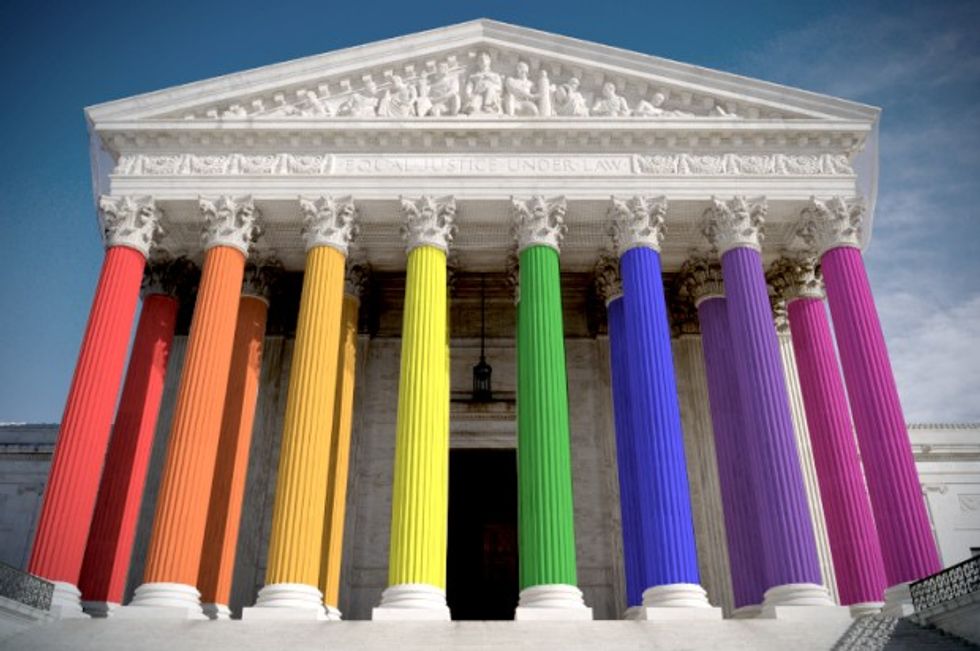 As you are reading this, oral arguments are underway in Obergefell v. Hodges, the Supreme Court case which will very likely give Americans full, nationwide marriage equality right in their hetero throats. Reportedly, all nine justices decided to come to work today, which has got to be chapping the wingnut pooterhole of one Scott Lively, who really thinks that Justices Ginsburg and Kagan owe it to the American people, to baby Jesus, and to Lively himself, to recuse themselves from the case. Why? Because they've done gay marriages to actual people, which means that they are big libtard homo-sympathizers and therefore have no business ruling on this case:

Standing on the steps of the Supreme Court, Scott Lively, president of Abiding Truth Ministries, told reporters he’s filing a motion with the Supreme Court calling for the recusal of Justices Ruth Bader Ginsburg and Elena Kagan.

“Justices Ginsburg and Kagan, knowing full well that unique legal issues regarding the definition of marriage would soon come before them, deliberately officiated at so-called homosexual wedding ceremonies creating not merely the appearance of bias, but an actual and blatant conflict of interest,” he said.

“In my personal view they have committed an unparalleled breach of judicial ethics by elevating the importance of their own favored political cause of gay rights above the integrity of the court and of our nation.”

Apparently it doesn't bother Lively that Justices Scalia and Thomas have repeatedly said anti-gay things in the past, which also sort of suggests that they are going to be "no" votes on this one. We guess it's only okay if you agree with Scott Lively! Also, too, Ginsburg and Kagan did not create "conflicts of interest," but merely officiated at perfectly legal marriage ceremonies, which is a thing that judges do, sometimes!

This would be a fun time to point out that Scott Lively is currently on trial for crimes against humanity, related to his anti-gay activism in Uganda, which directly led to the country's now infamous "Kill The Gays" bill. Among other things, Lively told a Ugandan audience in 2009 that gays were at least somewhat responsible for both the Holocaust and the Rwandan genocide, a fresh memory for Ugandans, who live next door to Rwanda. He also met with Ugandan lawmakers and bragged about being the inspiration for the law. So, Scott Lively is KIND OF an evil fuckstick and he probably shouldn't be standing on the steps of the Supreme Court talking about anything related to human rights.

But, of course, because there are only so many anti-gay activists left, they all talk to each other, so Lively's pouty demands might sound familiar. In January, it was Bryan Fischer and the American Family Association, demanding that Ginsburg and Kagan take the day off from Supreme Court-ing today, and go play softball or something. Media Matters reports that the National Organization for Marriage (NOM nom nom) is also a part of this hilariously dead end "campaign" to get Supreme Court justices to take the day off so as to prevent any further butthurt on the religious right.

Even shouty Bill O'Reilly got in on the fun last week, relying on misleading Fox reports that suggested that this "campaign" even exists, outside the adult daycare playrooms of the fringe religious right. O'Reilly wordmouthed at his guest that "these ladies must recuse themselves," due to their obvious gay-loving tendencies. You heard the man, LADIES!

Lively was joined on the Supreme Court steps by Janet Porter, the religious right lady what believes that gay marriage caused that whole Noah's Ark tragedy, with all the dinosaurs MMA-fighting on the big boat during a pretty darn shitty gullywasher of a rainstorm, which totally happened. Porter was there with a bunch of empty boxes, which "were there to 'symbolically' represent 300,000 restraining orders" they want to give to SCOTUS to make them stop being so nice to the gays. They'll fill those boxes with non-symbolic restraining orders once they find 300,000 people to give a fuck, we guess. Porter, loyal Wonkers will remember, is the one who basically wrote that idiot "Restrain the Judges" bill, recently introduced by Rep. Steve King, which would prohibit SCOTUS from ruling on cases if they are about anything "G-A-Y."

All this is to say that these people's plans totally worked, except that they didn't, because the gays have successfully infiltrated the nation's highest court, and they are in there RIGHT NOW, being all gay on each other and the esteemed justices. Everybody panic!