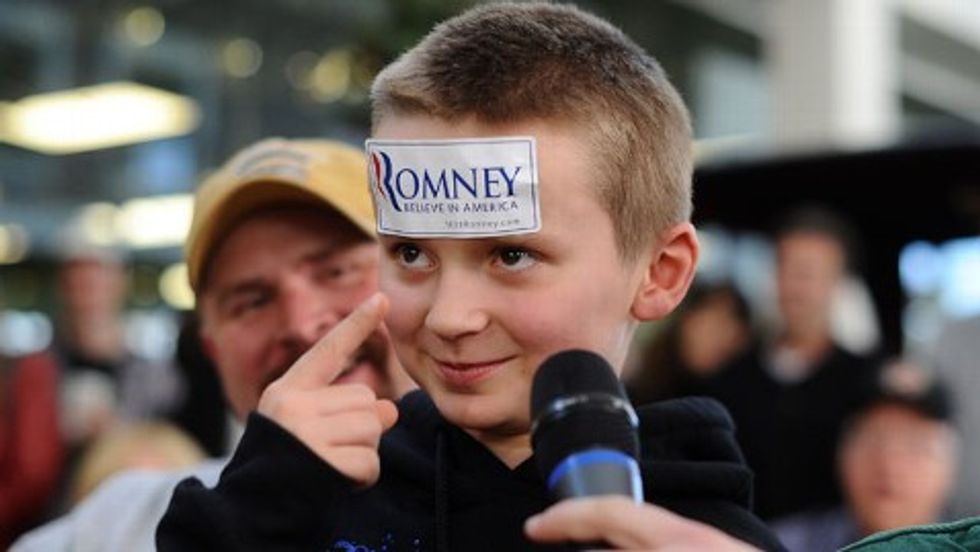 As we all know, there are no racists in the Republican party, because Martin Luther King was a Republican and Robert Byrd was at one time in the Klan, and also nothing changed in either party after the passage of the Civil Right Act of 1964 and the Voting Right Acts of 1965. Nevertheless, there is still a perception out there that some Republicans are occasionally just a teensy bit racist for some reason. This is actually due entirely to hyper-sensitive PC Liberals having hissy fits over nothing, and is mostly the result of libruls infiltrating Republican events to display racist messages.

Consider, for instance, this photo of a gentleman at a Romney/Ryan event in Ohio last week. Any number of blogs describe this man as a "Romney supporter" solely because he was attending a Romney rally and had a "Romney/Ryan" sticker on his kinda-racist shirt. Indeed, the Romney campaign even called the shirt "reprehensible" and said that of course such slurs have "no place in this election." However, as perfectly reasonable skeptics point out, the most obvious explanation is not that this is a race-baiting Romney supporter, but rather a race-baiting OBAMA supporter trying to make Romney supporters look racist:

Clue #1: Wearing a “Romney/Ryan” sticker on the back of his T-shirt. Nobody does this. Nobody.

Clue #2: It’s kind of chilly in Ohio this time of year, and the guy’s wearing only a T-shirt, while those around him are wearing coats.

My guess is that this guy also wore a coat when he entered the rally, then stationed himself toward the back of the crowd (in front of the riser where the press photographers are stationed) and then removed his coat to expose the T-shirt, with the explicit purpose of having it photographed.

. . . aaanndd, Clue #3: No name? A press photographer is going to take a picture like this and make no effort to ID the guy? Nuh-uh.

Talk about irrefutable! No one EVER wears a bumper sticker on an article of clothing! That would be silly, because they are supposed to go only on bumpers -- it's right there in the NAME. In all of recorded history, this has never been done, particularly not at political events. And only a troll would stand without a jacket in cold weather to display a political message, obviously. And no photographer has ever not followed up a photo with a full interview ever in the history of journamalism.

So yeah, definitely a false-flag operation. Just like this display in front of a home in Morgan Hill, California, which combines an empty kitchen stool, two watermelons, a noose, and "a sign set up to look like a teleprompter that read 'Go back to Kenya.'" There is also a Romney campaign sign affixed to the fence in front of this house, but it would be premature to call the homeowner a Romney supporter. And indeed, in a weird attempt at "objectivity," the headline on the story reads "Political display at Morgan Hill home called racist" -- because apparently a noose and watermelons are completely open to interpretation? It is a yellow nylon rope, after all, and that material was not used in the authentic olde-tyme lynchings.

We will also have to assume, just to be on the safe side, that liberal trolls are responsible for the Oooga-Booga Witch Doctor Halloween display in New Jersey. We are not quite sure how liberal trolls took over the brain of Jason Thompson, the son of Wisconsin Senate candidate Tommy Thompson (R-Hold Me Now) and forced him to say "We have the opportunity to send President Obama back to Chicago — or Kenya." Or how liberal trolls doctored a video of hiking afficionado Mark Sanford (R-Memaw's Front Porch) so that in a Fox News interview about tomorrow's debate, he appeared to say, on-camera and enunciating clearly, "Obama's going to come out in this case much more forcefully, and he's going to throw a lot of spears." And that's just within the last week -- those liberal dirty-tricks teams are probably tuckered out from all that false flagging!

Plain and simple: There is NO problem with racism in the GOP. So just knock it off with all the baseless accusations of racism, OK? And get back in the woodpile.