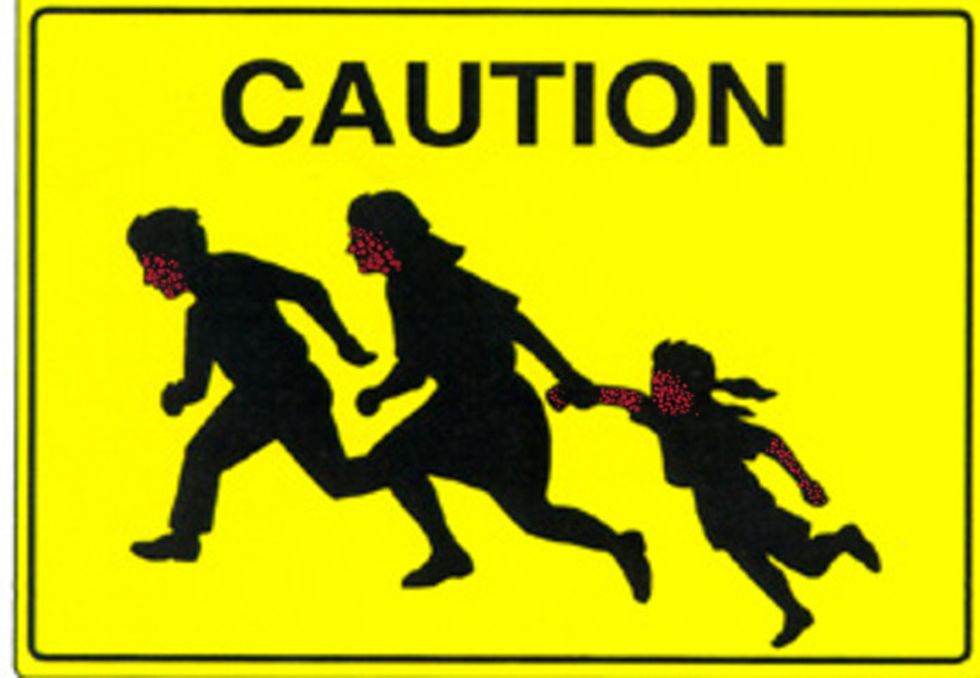 Break out the ominous creepyscary music of your choice -- we're partial to Bernard Hermann ourselves -- because it's time to tell some scary horror stories about the California measles outbreak! So far, at least 78 confirmed cases have been disagnosed across 7 states and Mexico; 48 of those have been traced to Disneyland or Disney California Adventure since the outbreak was first identified, and public health officials say that the large number of unvaccinated people is a main cause of the virus's widespread transmission.

Or so they want you to believe. Rightwing loonies with access to the internet, however, have an alternative explanation: It's illegal immigrants, spreading foreign pestilence!

For instance, there's Betsy McCaughey, who completely made up the idea that the Affordable Care Act included "death panels" and would force you to tell doctors all about your buttsex.

On Newsmax TV, McCaughey did at least urge parents to get their kids vaccinated if they haven't already, but also said that she's pretty sure that dirty damn foreigners are coming to our shores to spread the measles, warning that "sadly our federal government is not taking any responsibility at all for preventing people who are carrying measles from entering the country.” Not that there's any evidence that the Disney outbreak started with a foreigner. But wouldn't a blood test for everyone coming through Customs be a good idea?

Former Arizona congressdunderhead J.D. Hayworth was delighted to jump on the bandwagon and take it a step further: maybe it's not just air travelers, but those diseased immigrant kids that flooded across the border -- as we all know, they were just chock full of diseases!!

“You’re just talking about legal immigration, and you take a look at the last year and the influx of juveniles from Central America and obviously we have problems, so there are a couple of reasons at work."

Hayworth's very convincing science hypothesis is undercut somewhat by the inconvenient detail that children from Central America actually have much higher vaccination rates than American kids, probably because Honduras, El Salvador, and Guatemala, for all their many tribulations, are at least free of Jenny McCarthy.

Hayworth then showed a chart indicating that measles cases from 2001 to 2013 averaged 88 per year, and showing that in 2014 there were 2014. Obviously, that has to have something to do with dirty foreigns!

"So, Betsy, you’re telling us that part of it is an anti-vaccine movement, but the other part is illegal immigration."

Actually, while the Centers for Disease Control does acknowledge that many of the U.S. measles cases in 2014 "were associated with cases brought in from the Philippines," which had a major outbreak, the CDC doesn't suggest that illegal border crossers were a significant factor at all, and states that the "majority of the people who got measles are unvaccinated." The CDC also says that the majority of cases so far in 2015 are related to the Disneyland outbreak. Then again, they're the same people who said that Ebola was difficult to transmit, so why believe them?

But still, maybe, just maybe, there could be hordes of illegal immigrants just waiting to set off a measles bomb on the border, like all those ISIS guys did with Ebola last fall.

It's clearly time to fill the Rio Grande with bleach and build a border fence out of hypodermic needles.