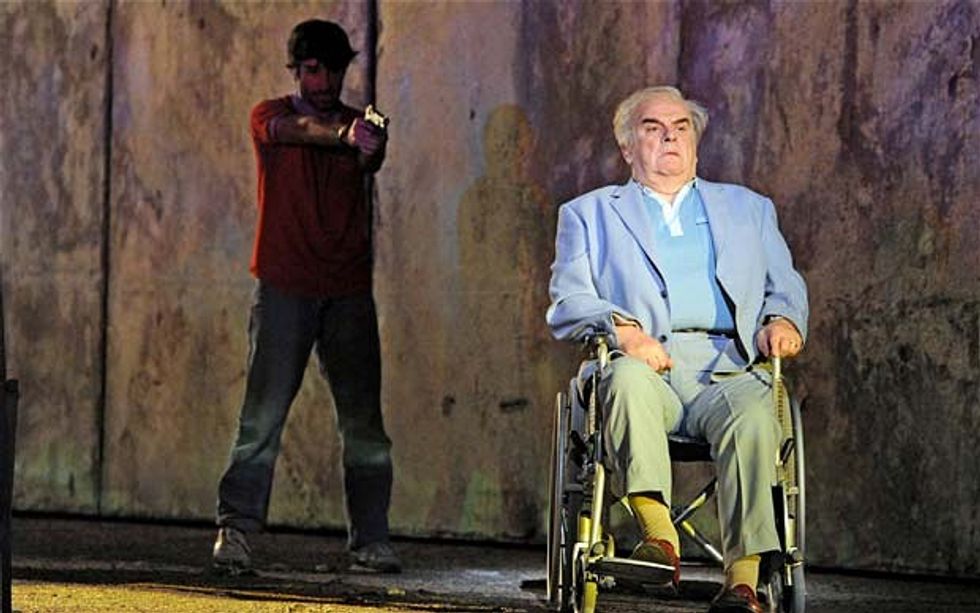 Time for an Arts Update! The editor of Superpatriot anddisgraced torture aficionado Allen West's blog is so mad at the Metropolitan Opera that she's just about ready to go to New York's Lincoln Center and stage a mock execution of the artistic director. You see, the monsters at the Met are staging a production of John Adams’s 1991 opera, The Death of Klinghoffer, a dramatization of the 1985 hijacking of the cruise ship Achille Lauro by Palestinian terrorists. The opera focuses on the murder of Leon Klinghoffer, a retired American businessmen whom the hijackers shot and threw overboard, and while his killing is treated as a tragedy, the opera also allows the Palestinian guerrilla to sing about their motives, which are, surprisingly, not pro-Israel. Or as West's Editor-in-Chief Michele Hickford explains it, the opera "presents [Klinghoffer's] murder as justified, not only because of Palestinian grievances against Israel, but also by the alleged evil and exploitative actions of Jews against others around the world."

Because fictionalized versions of the terrorists say the sort of things that actual Palestinian terrorists said, and the opera doesn't constantly step in and say, "This is wrong," Hickford decides that the opera is itself pro-terror propaganda:

In the opera’s libretto, there are passages that defame the Jews as a people. For example, the principal terrorist says, “Wherever poor men are gathered, they can find Jews getting fat. You know how to cheat the simple, exploit the virgin, pollute where you have exploited, defame those you cheated, and break your own law with idolatry.”

At one stage, the terrorist leader says to Klinghoffer, “America is one big Jew.”

Needless to say, if characters in a fiction say a thing, the work must be supportive of that thing. This is why so many college sophomores think that Shakespeare was a big fan of regicide. Not that Hickford is writing as a theater critic, of course -- instead, it's a standard case of bashing the effete liberal culturemongers who pollute our world with art that fails to glorify America. Asks Hickford, "How is this 'art?' How is this blatantly anti-Semitic performance acceptable? How can the Metropolitan Opera justify this egregious move?"

Over at the New Yorker, in a piece published in June, after the Met agreed to cancel a live simulcast of the opera in movie theaters, Alex Ross notes that the opera has always had a problem with accusations of anti-Semitism, but also points out that "a dramatist cannot address hatred without giving hatred a voice onstage." And no, he says, the opera doesn't glorify the terrorists:

And the terrorists’ words are counterbalanced by the utterances of the victims. In response to the Met cancellation, Adams said, “My opera accords great dignity to the memory of Leon and Marilyn Klinghoffer, and it roundly condemns his brutal murder.” Notably, Marilyn has the last word:

If a hundred people were murdered

flowed in the wake

would the world intervene.

They should have killed me.

I wanted to die.

Anyone who thinks that “Klinghoffer” romanticizes murder probably has not sat through it to the end. Indeed, Abraham Foxman, the national director of the Anti-Defamation League, admits that he has yet to see the opera.

But Hickford has a really creative satirical idea, at least:

I’m thinking of writing an opera called “Why Michael Brown Deserved to Die.”

What do you think? Do you think if I write a thought-provoking, probingly-artistic contemporary opera on the subject of Michael Brown’s untimely shooting, it will be met with critical acclaim?

Maybe it will be performed by the New York Metropolitan Opera during its 2015 season, and will be described as “dialogue” on a difficult subject.

Golly, if she writes lyrics and music as subtly as she writes columns, it should be a big hit. The orchestra would have to be made up solely of hammers and baseball bats, and there might be some difficulty actually getting the dead horse onto the stage, but it would certainly be interesting.

Elsewhere, Stupidest Man on the Internet Jim Hoft took up the cause, describing The Death of Klinghoffer as "justifying his death" and, like Hickford, urged readers to phone or email Met director Peter Gelb to demand the production be cancelled, which is perfectly fine, since it's not like the Met was condemning homosexuality on TV or spewing racism on the radio, which is what the First Amendment is for.

Of course, Hoft, ever the fact-checker, attributed the editorial to Allen West himself. Also, since we're nitpicking, both pieces incorrectly suggest that the terrorists killed Leon Klinghoffer by rolling him into the sea in his wheelchair; in reality, they shot him and dumped his body overboard. Not that it makes the terrorists any less terrible, but no, Klinghoffer was not thrown alive into the ocean and left to drown.

Needless to say, both pieces also have plenty of commenters who can't understand why any American Jews live in New York, produce antisemitic operas at the Met, vote for Democrats, or think that the Arabs can be reasoned with.