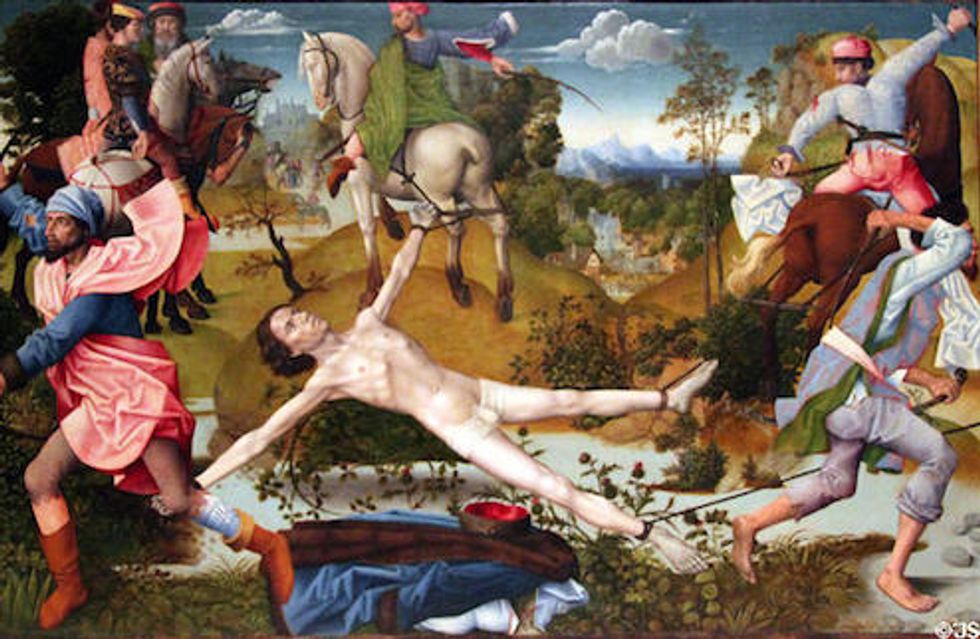 You might recall that Wisconsin is only the latest in a long long list of states that are currently ramming hot thick gay marriage down your throats, thanks to goddamn activist judges. But the attorney general of Wisconsin is a very sore loser and does not like the taste of gay marriage, so he figured that maybe if he just kinda sorta threatens to prosecute the county clerks issuing marriage licenses, he can shut the whole thing down.

Wisconsin Attorney General J.B. Van Hollen said Thursday that same-sex couples who have wed in recent days are not married in the eyes of the law and that county clerks issuing marriage licenses to gay and lesbian couples could be prosecuted. [...]

"You do have many people in Wisconsin basically taking the law into their own hands and there can be legal repercussions for that [....] So, depending on who believes they're married under the law and who doesn't believe they're married under the law may cause them to get themselves in some legal problems that I think are going to take years for them and the courts to work out."

Well, that might actually be true if a judge that is the boss of you, law-wise, hadn't already declared that the gays can get themselves all married up in your cheese-soaked state. So, see, the courts have already worked that one out for you. Aren't you attorney general types supposed to be lawyers? Geez.

Van Hollen doesn't seem to think the gays that are getting all homosexual married should be arrested -- only the people that license said filthy gays to do so. True, in Wisconsin, clerks can go to jail for issuing marriage licenses that aren't allowed under state law, except that law is sort of dwarfed by the fact that your OTHER law banning those clerks from letting the gays join in holy matrimony WAS DECLARED UNCONSTITUTIONAL.

In case you aren't already irritated with this doofus, please note that he is pretty certain that keeping the gays from getting married will be revered as the highlight and the hallmark of his career.

Van Hollen [...] said his work on the case would become part of a legacy he could be proud of because it showed he fought for the rule of law.

"Constitutions don't defend themselves," he said. "They're not worth the paper they're written on if someone does not defend what's in there...My primary oath and obligation that I have as attorney general above all else is to defend our constitution, above our laws, above everything else.

"It's actually quite a simple concept that people are either intentionally confusing, don't want to understand or really haven't gotten the message."

Guess what? Constitutions are also not worth the paper they're written on when they have unconstitutional discriminatory bullshit in them! There's no magic wand you can wave where you just say "see? look? Constitution!" and then everything is cool and you can go about your merry bigoted way.

We're not sure how to make this any clearer to Van Hollen and his ilk: you people are dinosaurs. You are on the way out. You are going extinct. You are literally going to die off soon, and what will be left standing are people who give zero fucks about who marries who. Just get out the way, and don't arrest anyone on your way out the door.