WI Gov To Have Police Arrest Dems, Force Them To Vote On Union Ban 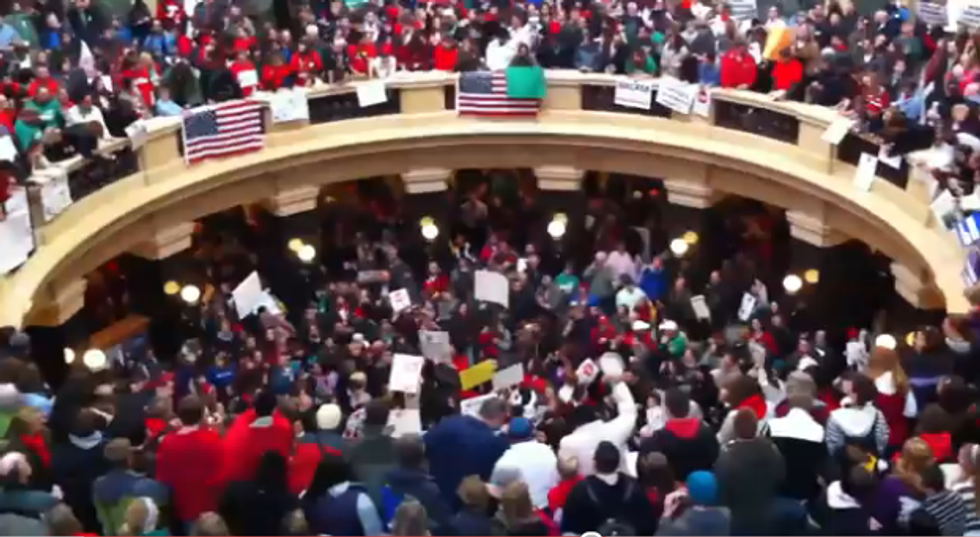 As we all learned from Glenn Beck, the pro-democracy protests in the Middle East arehopping from country to country and establishing chalk-based caliphates across the world. Wisconsin is right next to Minnesota, the home of Muslim Keith Ellison, so obviously it's happening there now too. Masses of protestors have been out on the streets and in the capitol building for days, and now Democratic legislators have decided to walk out on the vote to ban collective bargaining. Republicans, however, are planning on having the state police "round up" these Democrats and force them into the chamber. Unlike Hosni Mubarak, Teabagging Governor Scott Walker seems to have the control of both the military (National Guard) and (state) police. But what happens if he loses the police, who are unionized?

In protest of the budget repair bill that will strip public union workers of almost all of their collective bargaining rights, Senate Democrats have walked away from a floor session.

Senate Majority Leader Scott Fitzgerald said Dems are refusing to come to the floor to debate and vote on the bill.

Fitzgerald said at some point, if needed, Republicans will use the State Patrol to round up Democrats to bring them to the floor.

Security forces like the police are exempt from these new union-busting rules. But what if they suddenly decide to show solidarity with their fellow workers and refuse the governor's order to round up the Democrats? What if they arrest the governor instead? And which of these cheeseheads will punch Anderson Cooper in the face? This is all so exciting! [WisPolitics via Ben Smith]