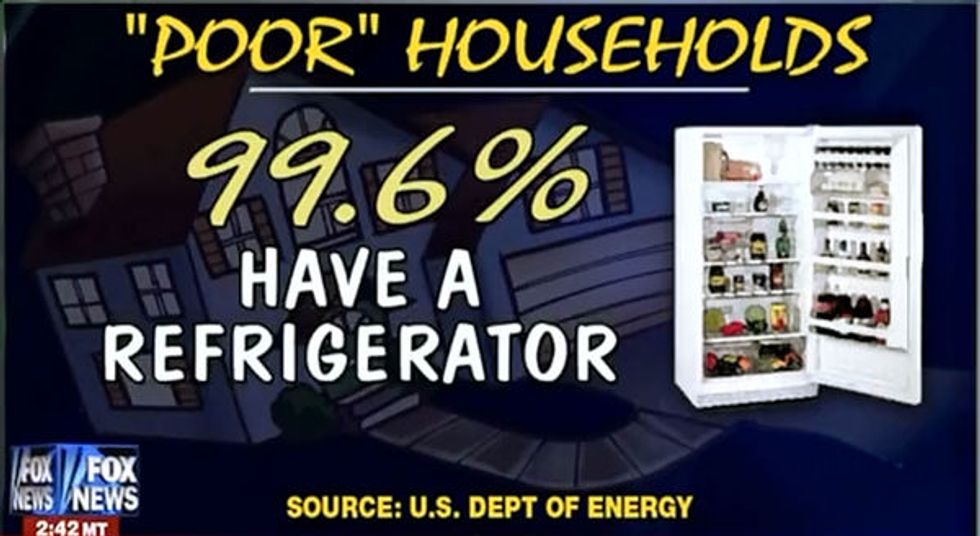 Gosh, absolutely no one could have seen this coming: Wisconsin's exciting new bill to shame the poor -- by sharply restricting what items can be bought with food stamps -- would actually cost the state millions of dollars to implement, even as the state learned that it won't be raking in any new revenues due to tax cuts.

Turns out that if you actually want to make sure EBT cards can't be used to pay for wild, high-living luxury items like sharp cheddar cheese or white rice, you also have to develop and install new software for all the cash registers and scanners, so that the prohibited items can be excluded. That would come at a cost that the state's budget office estimated only as "several million dollars" -- and possibly more. Who knew?! Plus there's the costs of drawing up the guidelines, managing the program, managing and updating the database of what foods the filthy takers would be allowed to buy, and so on. Food Police don't work for free, after all (unless maybe the Masonic Police offer to help out).

Not a big deal, said one of the bill's supporters, state Rep. Mark Born, a Republican who chairs the Public Benefit Reform Committee (and also represents a place called "Beaver Dam," which we swear we are not making up). Oh, sure, maybe it would cost millions of dollars to implement the new restrictions, and maybe the state's revenues have flatlined instead of magically surging in response to tax cuts, but that's no reason to not pass the bill right now, because those costs won't happen until later, which means they don't exist! Before the restrictions could actually go into effect, the state would have to ask for a waiver from the federal government, and the legislature would only have to pay for the new software and other administrative costs after the feds give permission. So why even think about the costs now? Heck, said Born, "We're not appropriating $3 million or $50 million or $2 on this bill today." And who knows, maybe by the time the increased costs do roll around, Wisconsin will be swimming in revenue, if only it can cut some more taxes, since that's worked so well in Kansas.

Fortunately, the requirement for a federal waiver may make the whole proposal moot. The federal supplemental nutrition program hasn't yet approved any other state's wackaloon ideas for imposing extra shame on SNAP benefits, so there's that.

"You’re willing to waste millions of dollars despite our deficit and disappointing revenue outlook, to be what? The food police?"

Even Republican Adam Neylon, who was persuaded by the budget estimate to join the committee's five Democrats in voting against the bill, said that while he supports eliminating waste and all those good conservative values, the bill would add "another level of government to these programs" at a cost of "millions of tax dollars." Nonetheless, the bill passed the committee on an 8-6 vote, and went on to the full Assembly.

The bill's sponsor, Republican Rep. Rob Brooks, said his intent wasn't to shame poor people, no no no no no, not at all. He just wants poors to make healthy food choices, and also of course he wants to fight against "anecdotal and perceived abuses" of the system, which obviously must happen all the time with poor people taking lobster and crab legs back to their luxurious Section 8 housing where they have refrigerators, color TVs, and indoor plumbing, even, just like the Crowned Heads Of European Royalty.

"My intent is not to stigmatize, not to shame anyone," Brooks explained, apparently with a straight face.

It's not yet clear whether the bill's chances in the full Assembly will be hurt by the fact that these new restrictions won't save a dime, but will actually cost taxpayers millions, just for the sake of making supermarket checkouts slower and more frustrating for everyone in line. Lawmakers may decide it's a perfectly cromulent expense, as long as it reminds poor people that they need to be ashamed of having subsistence-level food. After all, even though every single program to drug-test people receiving public assistance has turned up only small numbers of drug users while costing tons of money, those poor-shaming measures remain wildly popular with "fiscal conservatives," so maybe the state can scrape up the money it needs to shake a finger in the face of poor folks. Maybe it can cut higher education some more; Wisconsin's already on track to trash its public universities, so it might as well take a few extra whacks at the schools.