With Nothing Better To Do, Republicans Try to Ban Abortion Some More 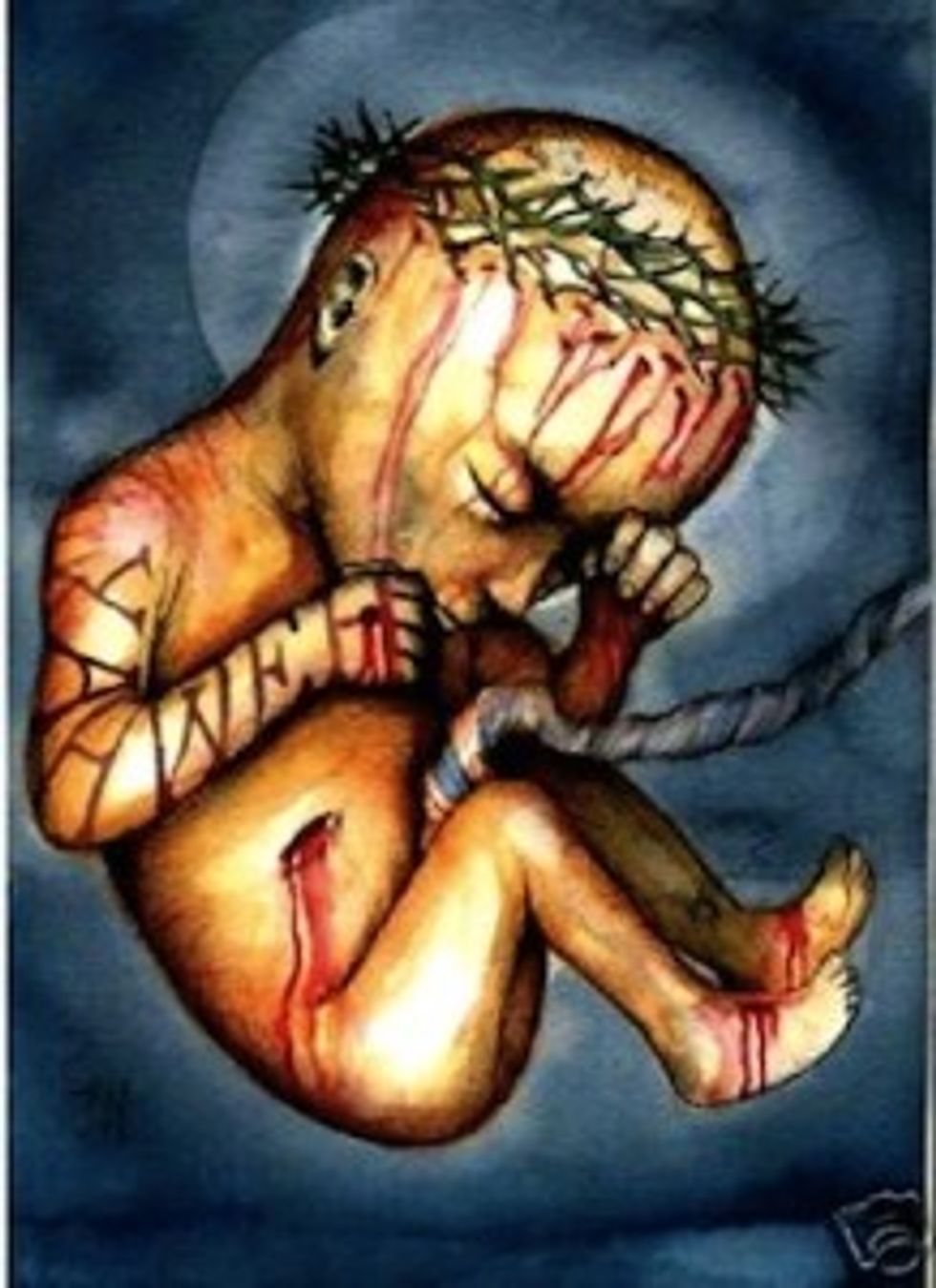 Ah, lazy summer days. Fresh-squeezed lemonade, barbecues, bills to ban abortion for reasons that make absolutely zero sense and will never actually become law anyway, but who cares,congressional Republicans have their priorities, you know, and even though you might think "jobs" or "The War on Terra" or "naming post offices" might be more important, you would be wrong because nothing -- nothing!!!! -- is more important than preserving the sanctity of fetuses, until those fetuses get borned and might need medical care or, say, food, in which case, fuck 'em because they are now takers, but hey, that's not the point, shut up, sanctity of life, bitchez!

The House will vote next week on a bill banning abortions across the country after 20 weeks of pregnancy.

Doug Heye, deputy chief of staff to House Majority Leader Eric Cantor, R-Va., confirmed to CQ Roll Call that the chamber is on track to consider legislation next week that would ban all abortions after the 20-week threshold — the point at which some medical professionals believe a fetus can begin to feel pain.

The legislation, sponsored by Rep. Trent Franks, R-Ariz., is being marked up by the full House Judiciary Committee on Wednesday and has the strong backing of the National Right to Life Committee.

"Some medical professionals" also believe Todd Akin was right about how women have magic ladyparts that can detect rape sperm and "shut that whole thing down," but, see, they are wrong and also basing their "medical" opinions on some science fiction they read back in the '70s in Amazing Stories because they are not privy to "more recent data."

However, other medical professionals -- and by other, we mean the entire medical profession that didn't go to Acme Medical School -- believe that fetuses do not feel pain at 20 weeks and that "pro-life" activists who want to ban abortion on those grounds don't actually give a crap about fetuses. (See above re: medical care and food.)

This is only the bazillionth time that Republicans have tried to ban abortion because fetuses or women or insert-bullshit-reason-here. But this time, it's really super duper important.

An urgency to move forward with the expanded bill, however, comes amid pressure from outside groups following the the case of Kermit Gosnell, a Pennsylvania abortion doctor who was recently convicted of three counts of first-degree murder. Gosnell was found to have operated his clinic in squalor and to have killed infants after they had been born.

“The trial of Kermit Gosnell exposed late abortions for what they really are: relocated infanticide,” Franks said in a recent statement. “I pray we use this as a ‘teachable moment,’ in the words of President Obama, and can agree that, at the very least, we are better than dismembering babies who can feel every excruciating moment.”

Oh, right. The trial of Kermit Gosnell, the doctor who performed cheap and dangerous abortions for women who did not have access to the safe kind because of all the restrictive laws Republicans have passed over several decades, thereby forcing women to turn to more affordable and unsafe alternatives like Kermit Gosnell because women will always seek abortions, no matter what the law says. So yes, we should definitely pass more restrictions to make it even harder for women to obtain abortions so that they will only have Gosnellesque options for their abortion needs.

Wait, huh? Does that make any sense? Why no, no it does not. But then, this is the Republican Party we're talking about, and they have a long-standing opposition to making sense because of Jesus and Thomas Jefferson. Or something.

While the bill may well pass the Republican-controlled House, it is not going to pass the Senate, nor is President Obama going to sign it, so this is all a ginormous waste of time, which is so obvious, even former Rep. Mary Bono Mack, who is a Republican, can see it.

“It was very frustrating,” Bono Mack told CQ Roll Call recently. “There were real issues to focus on that should have been the news of the day. It wasn’t this.”

Real issues? Pffft! Real issues are for pussies and Democrats. Republicans are far more concerned with pretend issues like "fetal pain" and IRSghazigate, which are so much more fun for Republicans than, like, job creation 'n stuff. If only Mary Bono Mack understood that, maybe she'd still be in Congress.