Without Gallup's Crappy Polls, Nate Silver Is Nothing, Says Gallup 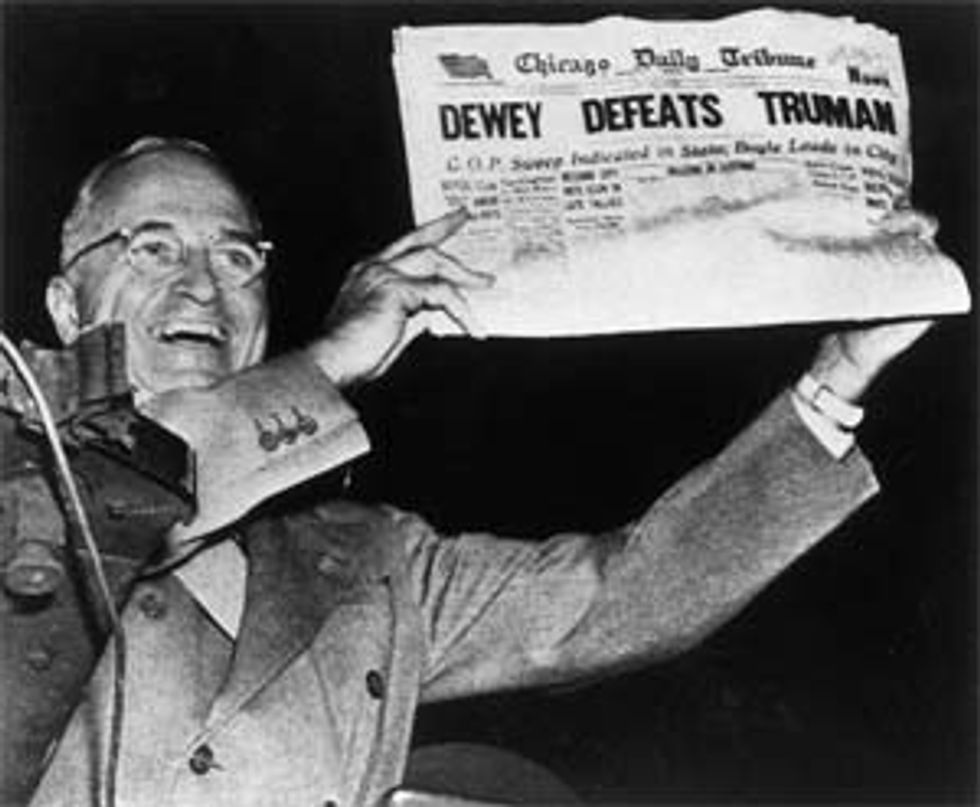 One of the "fun" things about presidential elections is that every four years there's a new dumb thing about the process for political junkies to yell at each other about despite the disinterest or genuine disgust of normals, and this year it's polling! Did Nate Silver's devil-math suck all the fun out of democracy, forever? Were the polls skewed because they didn't reflect Republican understanding of reality? Were Gallup and Rasmussen "in the tank" for Republicans? Well, Gallup Editor-in-Chief Frank Newport has decided to weigh in on this controversy, and would like you to know that (a) Gallup was not wrong, because it abruptly stopped picking Romney to win by 7 points several days before the election, and (b) Nate Silver is a parasitic remora clinging to the great white shark that is Gallup and if everyone gets into the Nate Silver business the whole polling industry will collapse, and then we'll have no polling at all, and then we'll be sorry!

We feel vaguely bad for Frank Newport, truly, because he represents a stolid and storied organization and he's probably institutionally unable to give vent to his full-on snarky rage against his critics, as he'd like. Instead, he had to jam a bunch of passive aggression into a very serious blog post about how successful Gallup's polling was this year! First, he'd like you to remember that Gallup does not attempt to "predict" the election, like a common soothsayer. (Yes, he put "predict" in quotes.) But he'd also like to point out that, damn it, their final numbers were within the margin of error of being correct, and if they happened to have Romney a couple points ahead of Obama instead of vice-versa, well, those are the breaks, you know?

You might point out that Gallup actually had Romney ahead way outside the margin of error going into the final week of the campaign, then rather abruptly changed to be more in line with every other reputable polling company. This may have looked like herding, where pollsters start adjusting their methods because they're afraid they're wildly wrong, but Frank Newport would like to make it clear that this was not the case and Obama's numbers just suddenly shifted for the better at the last minute. Was it because of Superstorm Sandy? Hard to say, but the change came after the storm, so yes, almost certainly.

But then he really lets you know what he thinks of math and numbers nerds like Nate Silver, who dare to sift through multiple publicly available yet contradictory sources of information to make sense of them:

But some of this will result from a variant of the venerable "law of the commons." Individual farmers can each make a perfectly rational decision to graze their cows on the town commons. But all of these rational decisions together mean that the commons became overgrazed and, in the end, there is no grass left for any cow to graze. Many individual rational decisions can end up in a collective mess.

We have a reverse law of the commons with polls. It's not easy nor cheap to conduct traditional random sample polls. It's much easier, cheaper, and mostly less risky to focus on aggregating and analyzing others' polls. Organizations that traditionally go to the expense and effort to conduct individual polls could, in theory, decide to put their efforts into aggregation and statistical analyses of other people's polls in the next election cycle and cut out their own polling. If many organizations make this seemingly rational decision, we could quickly be in a situation in which there are fewer and fewer polls left to aggregate and put into statistical models. Many individual rational decisions could result in a loss for the collective interest of those interested in public opinion.

This will develop into a significant issue for the industry going forward.

Shorter version: If you people insist on thinking Nate Silver is so great, everyone in the polling business will stop doing expensive polling and just start analyzing other people's polls instead and then where will you be, huh? Where will reporters get their numbers for their "horse race" stories during presidential campaigns? They might have to write about the issues or something! The horror! This is basically the argument real news organizations have been making for years about how blogs like Wonkette don't do any expensive reporting but instead just make dick jokes about other people's news stories and steal their pageviews, and journalism has collapsed over the past eight years, so maybe there's something to it.

Meanwhile, Dick Morris went on Sean Hannity's show and pretty much came out and said that his crazy Romney landslide predictions were for Republican morale purposes, despite his assertions at the time that they were all about secret poll information that only he could see.

Sean, I hope people aren’t mad at me about it ... I spoke about what I believed and I think that there was a period of time when the Romney campaign was falling apart, people were not optimistic, nobody thought there was a chance of victory and I felt that it was my duty at that point to go out and say what I said. And at the time that I said it, I believe I was right.

Don't worry, Dick, people won't be mad at you for lying to them to their face! You will still get paid gigs on conservative media forever and ever, and will have a venue to spout your bullshit numbers when Nate Silver has put well-meaning but incompetent shops like Gallup out of business. [Gallup/HuffPo]