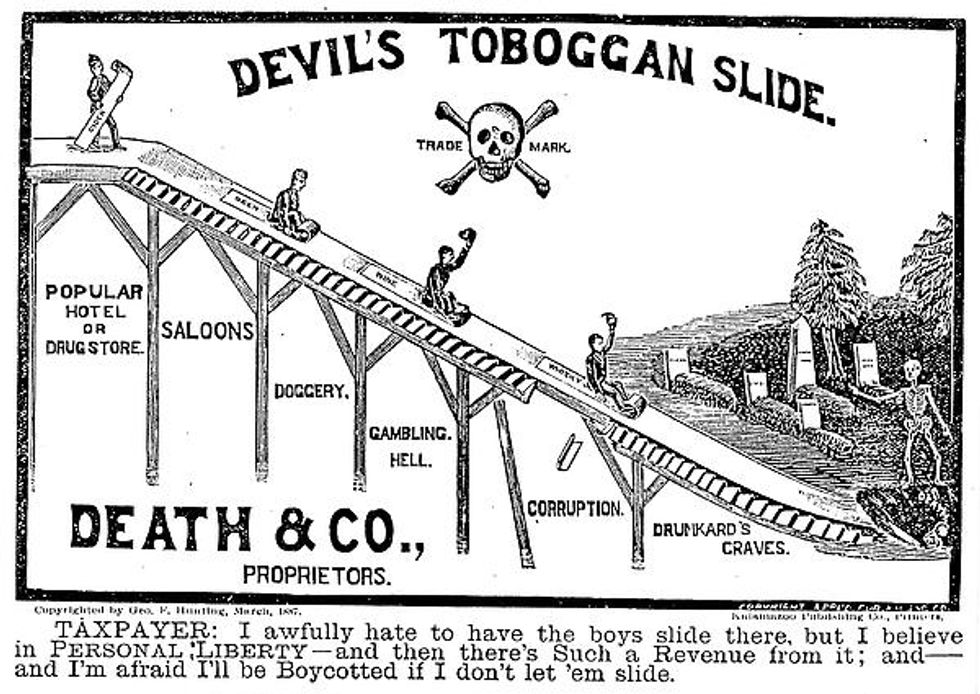 Nostalgic for the days of Carrie Nation? Want to protect hearth and home from the Sorrows of Drink, or weed, or the Pokémans addiction? Then you may want to get yourself signed up for the Women's Christian Temperance Union, which is still somehow a going concern 80 years after the end of Prohibition. And since Prohibition was such a huge success, now the organization's 4,000 to 5,000 members are gearing up to fight the demon weed Marijuana, according to this AP story. Seems that the Maine chapter of the WCTU has resurrected itself in response to Portland's recent referendum legalizing pot use -- a law which is expected to have no real effect, since police say they'll continue to enforce state laws against the stuff.

Only this time around, instead of smashing up barrels of whiskey or marching around singing hymns in bars until the proprietors pledge to stop selling spirits, they're going to try a "lower-key approach," which seems mostly to consist of having 501(c)(3) status, collecting donations, and arglebargle until people get their lives straight:

"We just want to bring a new passion here. It's not that we want to be self-righteous and condemn you because you're drinking or drugging or you're smoking pot," said the Rev. David Perkins, who is working with his wife to restore the WCTU's Portland chapter. "It's not that. We want to love you but tell you that there are ill effects."

Sounds like a terrific plan! We searched the article in vain for anything more specific; beyond that goal and a desire to clean up the old meeting house, we didn't see anything. But they are definitely bothered about all this pot.

"We find that a lot of people who are on hard drugs had started with marijuana ... That's one of the reasons we don't agree with the new law."

Ah, the old "gateway drug" argument -- that's bound to be a winner, what with its absolutely unambiguous record of ambiguous studies.

There's something faintly endearing and eyeroll-inducing about these folks, like the earnest student Marxists on every college campus everywhere who form a "New SDS" every few years. Or the guy who got elected as a Whig last month. Mostly, these folks leave us torn between "oh for fuckssake" and "huh -- there should be a preserve for outdated social reform movements somewhere." Maybe we could start a theme park, where the Temperance folks could picket against the Theosophical Society and the Free Silver advocates could share organizing tips with utopian diet reformers or something. Just don't invite the Know-Nothings, because there's little chance you'd get them off the House floor.