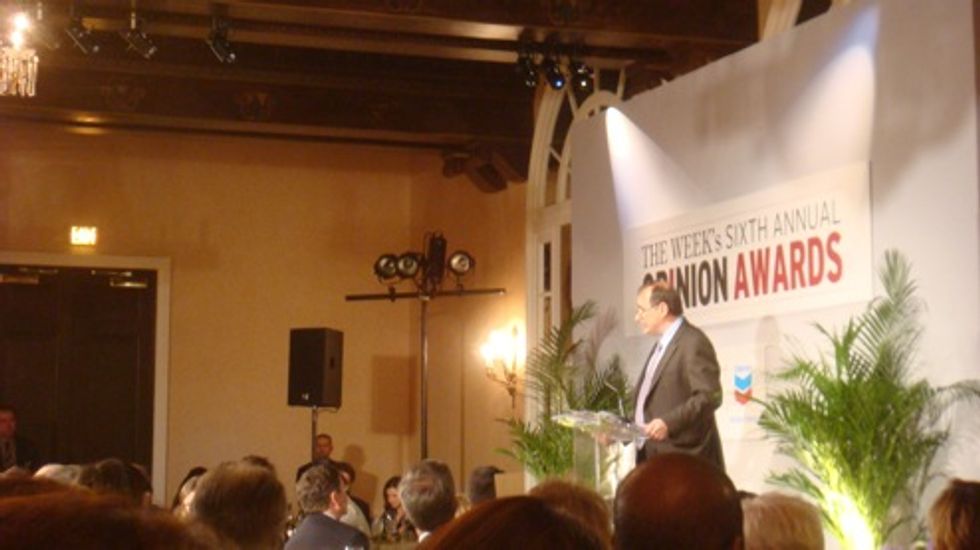 On Monday night your two Wonkette associate editors attended a Dinner Party thrown by the digest The Week, called The Week Opinion Awards, and we're only posting about it now because hey, shut up. It was somewhat "A-List," meaning (a) why the poo were we invited and (b) why the poo did we go? Because after only four seconds at the opening cocktail party, your male associate editor was begging Sara to leave. But two full glasses of gin over the next four seconds changed that attitude into "LET'S GO FUCK WITH LINDSEY GRAHAM" and we stayed for the dinner after all.

Oh that guy up top is Michael Calderone, one of the 94 Politico staffers who were there, including Really Bad Ones like Mike "WIN EVERYTHING" Allen and Jonathan "Flowers" Martin. See if you can spot Lindsey Graham in the photo, too! BECAUSE HE WAS THERE, as was Sen. Ben Nelson and John Dingell and a few other elected wieners.

See there's Ben Nelson on the right, from behind, the one with the hair. CHUG CHUG CHUG GIN.

The Dining Room! Yes, the dining room. Who is Famous in this foto? The baldy on the left-center there with the dark hair, we think that is Josh Marshall's new Internet slave Matt Cooper, the one who was supposed to be in jail with Judy Miller a million years ago. The guy at the podium was like the editor of The Week or something and he was praising the important members of Congress in the room. Apparently Israeli spy Jane Harman was there! The editor guy announced her name and your male associate editor laughed loudly, bringing shame to his table.

After dinner there was a terrible panel with Joe Scarborough, Eugene Robinson, Claire McCaskill, and gay old Lindsey Graham (who has a mohawk?). They talked about torture and shit and Lindsey Graham pretended to be a moderate. They took questions from the crowd, too! We wanted to ask something about Truck Nutz but Chris Matthews, who was in attendance, kept grabbing the microphone and shouting slurred nonsense at McCaskill.

Your favorite Morning Mika was the one picking questioners, arbitrarily. Wtf? THIS IS WHAT PEOPLE DO FOR FUN IN WASHINGTON.

Look we don't know how to use cameras, okay? But here is some blurry amateur pornography from outside.

Only another week until the White House Correspondents' Suicide Festival!