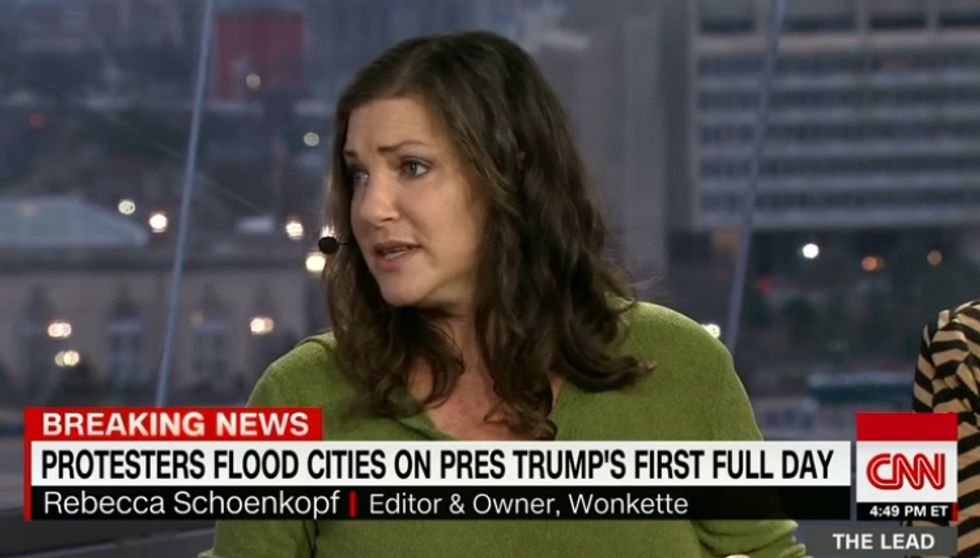 Just in case you missed it Saturday while you were out marching for equality, justice, freedom, reasonably priced love, and a boiled egg, here is Yr Editrix on CNN's The Lead With Jake Tapper, pretty much owning cable news for her far-too-brief appearance on an all-star panel -- CNN's term, not ours -- discussing the Women's March and that inauguration thing that happened, too. They even managed to get "Editor & Owner, Wonkette" into the chyron. It was even better than that time we got our name in the local paper for winning the Cub Scout Pinewood Derby.

And then there was that lovely pivot where she spoke to former Arizona Gov. Jan Brewer, thanking Brewer for being so insistent on expanding Medicaid under the ACA -- Brewer had even told the state legislature she'd veto any bill until the Medicaid expansion passed. "You saved a lot of lives," said Rebecca, adding she's worried what'll happen if it all goes away. Brewer's surprise at a dang liberal praising her was palpable, Tapper said it was "a lovely little moment," and Rebecca won the Raising the Level of the Discourse Award, and also the No Seriously She Is Nice in Person Award Why Doesn't Anyone Ever Believe That.

There's other stuff in there, too, like a brief discussion of Donald Trump's obsession with crowd size, and then they got to Mary Katherine Ham, a writer for The Federalist, who liked the nice tone of Saturday's march and said it was a refreshing change from an incident Friday night where a woman who'd lost her husband in Afghanistan and a man who lost his brother in Iraq were taunted and spat upon by protesters as they entered one of the inaugural balls. Ham was careful to say that of course such coarseness doesn't characterize all liberal protesters, just as Tea Partiers were too often portrayed by the press as if the most extreme of their members represented conservatives. But you know, liberals have a lot of biases, too, she said. This generated some epic side-eye from Yr Editrix:

A Lot Of People are saying there's a misogynist in the White House. This is what we hear.

Ham went on to say that such completely unrepresentative nastiness is "part of the story, as is Madonna saying she thinks about blowing up the White House, which we very accurately predicted would become the rightwing talking point from the Women's March, and thanks a heck of a lot for that, Madonna. Happily, Rebecca wasn't having that, pointing out that Madonna's point wasn't about blowing up the White House at all, but about acknowledging we have strong emotions and moving on to peaceful change -- which Ham dismissed as "an imoprtant caveat," rather than the whole point. Said Yr Editrix, "You can talk about somebody's emotional feeling without actually blowing up the White House, and to curtail it that way is dishonest, I think." For what it's worth, the full Madonna bit went like this:

Yes, I am angry. Yes, I am outraged. Yes, I have thought an awful lot about blowing up the White House. But I know that this won’t change anything. We cannot fall into despair. As the poet W.H. Auden once wrote on the eve of World War II, "We must love one another, or die." I choose love. Are you with me?

Van Jones, who hadn't seen Madonna at all but heard Ham's version of it (and not Rebecca's?) jumped in and condemned Madonna's violent sentiments in the strongest possible terms, because shame on people for ever thinking bad things even in the context of rejecting them. But at least we got to hear Rebecca toss in a sotto voce "Chicks love Van Jones" before the segment was suddenly out of time, thanks to a Certain Interviewee having been late for his segment earlier in the show. No names mentioned, but there was a baseball cap involved.

It was Michael Moore.

The editrix herself would like to jump in here and add that no, she wasn't smartly disarming Jan Brewer with Jedi Mind Tricks; she thinks it is important to commend an asshole when they do a non-asshole thing, and Brewer's strongarming her own GOP into expanding Medicaid for Arizonans was not only good -- and did save lives -- it was a kind of Cool Dictator move. Also something something blah blah blah, she chooses love, when POSSIBLE.