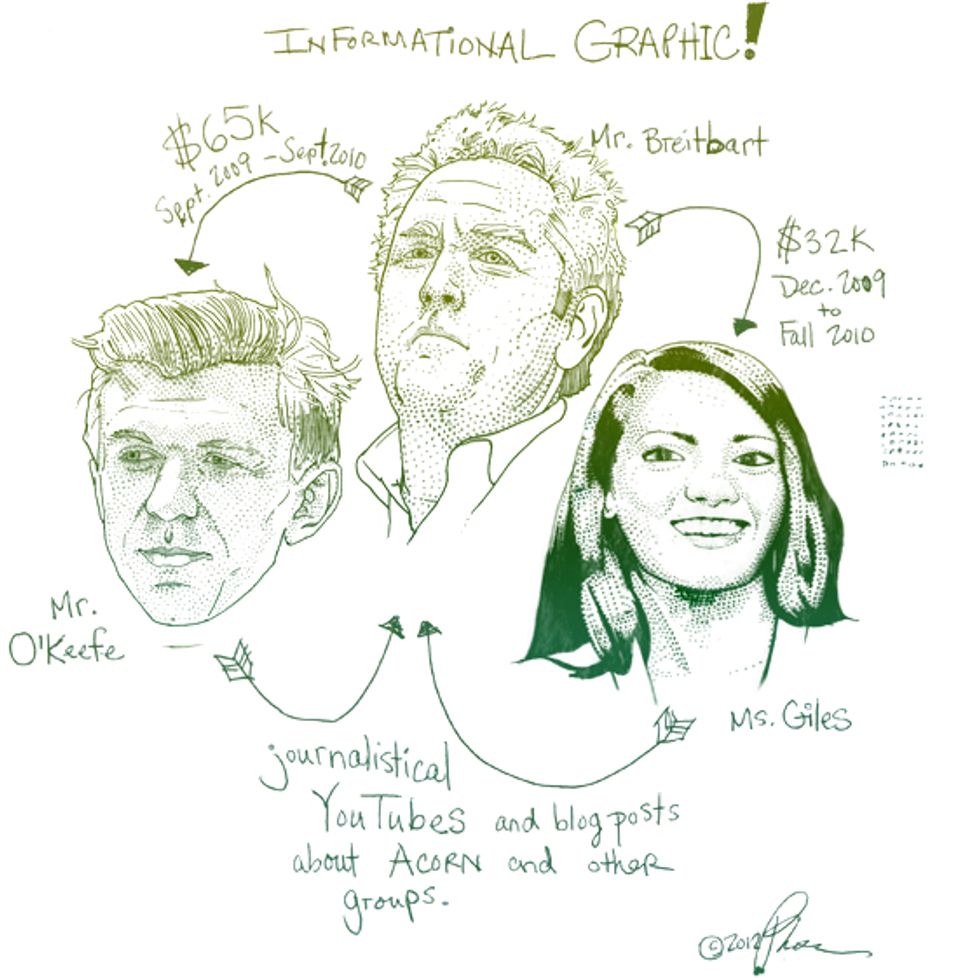 WONKET EXCLUSIVE! MUST CREDIT WONKETTE!!1! Very independent citizen-journalist James O’Keefe and his equally self-funded co-star in the ACORN stings, Hannah Giles, got real paid shortly after finishing their videos in the early fall of 2009, according to depositions taken three weeks ago. The pair admitted under oath to signing contracts with (the now recently deceased) Andrew Breitbart and his business partner, attorney Larry Solov, for the sum total of $120,000. Pretty shocking, right? You could buy a fairly high-end sex boat with that kind of cash. Or, one could, anyway.

The depositions were taken this past March at the Washington, D.C. offices of Planet Depos — a third-party supplier of certified court reporters and legal videographers that is really, actually named that, which is totally great. The depositions were taken as part of an ongoing lawsuit filed by Juan Carlos Vera, a former ACORN employee secretly recorded by O’Keefe and Giles during their sting at the community organizing group’s San Diego offices. (Recording confidential conversations without the consent of all parties is a violation of section 632 of the California penal code.)

Studious observers of the ACORN video controversies may recall that Vera was the ACORN employee who called local police to report on James O’Keefe’s and Hannah Giles’ pimp/boyfriend and prostitute characters just hours after speaking with them. Really abnormally obsessive observers might also recall that the full transcript of the hidden-camera video concludes with O’Keefe and Giles debating with each other over why exactly Vera is photographing their license plate from across the parking lot. The two would ultimately tell the media that Vera had agreed to help them smuggle underage prostitutes through Tijuana and that he wanted to solicit the services of Giles’ prostitute character.

According to his recent testimony, O’Keefe ultimately received $65,000 for his “life rights” from Breitbart in $5000/month installments from September 2009 until September 2010 (terminating roughly around the time that O’Keefe’s failed sex boating of a CNN reporter started to make headlines). Giles, who testified the day after O’Keefe, was also supposed to receive $60,000 per year (or $5,000 per month) but was only compensated $32,000 over the course of ten months from December 2009 to September 2010. Breitbart had reduced her monthly salary to $3,000 beginning around April 2010 and terminated Giles that summer. (There may be a Lily Ledbetter Act lawsuit in Ms. Giles's future.)

“Ms. Giles described the cause as ‘a conflict of visions,’” Vera’s attorney Gene Iredale said during a phone interview. Sources close to O’Keefe told us that Breitbart had been upset with him for similar reasons, as O’Keefe primarily spent his salaried year with Breitbart giving paid lectures, producing a Census sting that failed to garner media attention, and getting himself arrested in New Orleans.

The new details brought out by the recent depositions have done much to complicate the carefully crafted public narrative of the videos’ development. Breitbart and several others had been involved in the planning stages beginning in July 2009, following a period wherein O’Keefe and Giles had shopped around their East Coast ACORN videos basically like a pilot. “They discussed ACORN during their [Breitbart and O’Keefe’s] first phone conversation,” Iredale tells us. “Andrew Breitbart knew about Mr. O’Keefe’s plans before the West Coast videos were made, and he was aware they were recording people without their knowledge or consent.” During his deposition, O’Keefe refused to provide any details from those early discussions that did not directly pertain to the making of the San Diego video, as per the instruction of his attorney, Mike Madigan.

Aside from Breitbart, O’Keefe and Giles enlisted several of their friends in crafting the “prostitute with a law student boyfriend /aspiring pimp” narrative that they used in all the ACORN offices they visited. O’Keefe consulted among others Ben Wetmore, his mentor since Rutgers and former boss at the conservative Leadership Institute. Wetmore is probably best known for authoring the “CNN Caper” document, the itemized action plan and script for O’Keefe’s failed plot to lure CNN’s Abbie Boudreau onto his sailboat for a “comical faux seduction.” Stan Dai—who was arrested (and later convicted) with O’Keefe and two other men during the botched attempt to investigate Louisiana Senator Mary Landrieu—proposed the idea of including the concept of housing underage prostitutes in the ACORN sting. Rounding out the cast of would be co-conspirators: Queenie Bui, a Vietnamese American friend of Hannah Giles, who helped host a planning meeting; Anthony Pombal, who was to play the pimp but dropped out due to work obligations; Roger Masi, a college friend of O’Keefe’s who was also scheduled to play the pimp, but had to drop out because he made Hannah Giles uncomfortable; and Rachel Coolidge, who was to play a second prostitute in the original plan, but ultimately could not afford the plane tickets. Anthony Dini, an aspiring singer-songwriter and hometown friend of O’Keefe’s, provided his original song “Ridiculous,” which can be heard during the opening and closing sequences of all the ACORN videos.

You can buy “Ridiculous,” the title track off Dini’s album, from iTunes here.

Normally, Matthew Phelan has been a science journalist, a cartoonist and a writer of fake news headlines. His work has appeared in Current Science, Hacker Monthly, The Onion and Chemical Engineering magazine.

Liz Farkas currently performs due diligence research for a white-collar private investigation firm in New York. She has previously contributed to The Rutgers Centurion, a monthly journal of conservative thought at Rutgers University co-founded by James O’Keefe.