Wonkette Global Watch: Just How Freaked Out Should We Be About North Korea This Time? 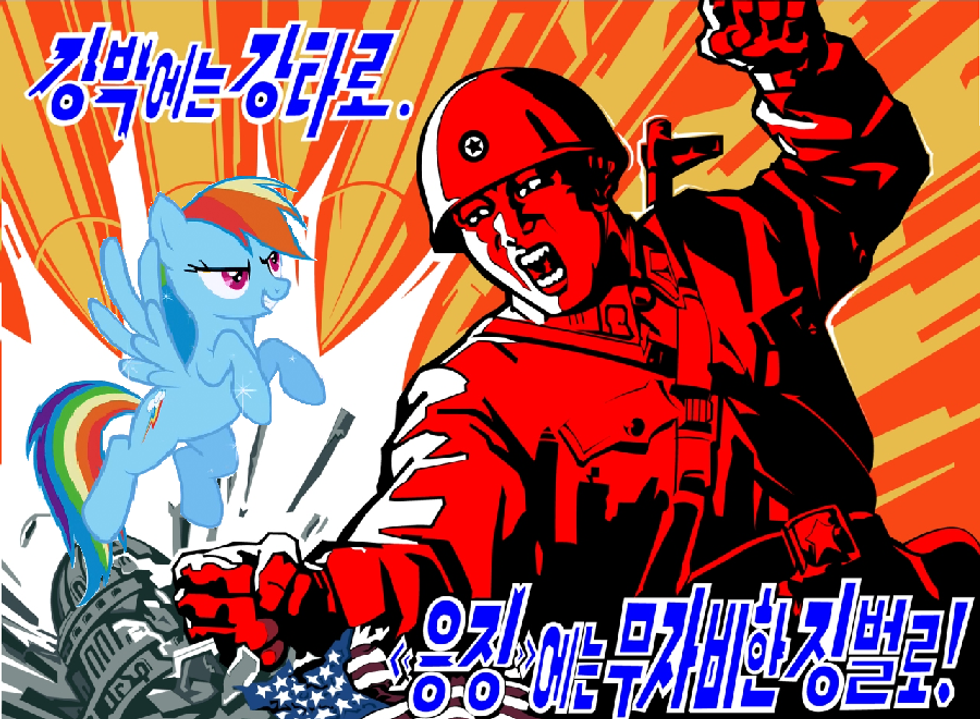 So maybe you heard this thing about howNorth Korea says it has nullified the 1953 cease-fire that ended the Korean War, and it has also disconnected its emergency hotline to South Korea. And maybe you are wondering, like we are, whether this is something to be maybe kind of worried about -- in that vague way that you worry about things you have absolutely no control over -- or if it is just more of the usual ranting from a country that is the Zaphod Beeblebrox of empty threats?

After all, North Korea promises that Seoul or Washington DC will be consumed in a "sea of fire" about as regularly as certain wingnuts promise to water the Tree of Liberty with the blood of tyrants. They are like the angry drunken roommate of international politics, always muttering about how he's gonna take down those fuckers at work one of these days and then just going back to his room and masturbating over the latest issue of Guns & Ammo, or in North Korea's case, putting on enormous military parades and starving people. And it's only gotten worse lately, since Muammar Gaddafi is no longer available to share the job of Flamboyant Heavily Armed Dictator Who's Crazy as a Shithouse Rat.

And yet, we also know that some people's crazy roommates occasionally do end up driving around with an assault rifle and a map of targets, so just how does the current round of Pyongyang Screaming compare to previous incidents? Should we freak out a lot, or just a little? (The honest answer: We haven't the slightest idea, and why are you looking for international insights on a mommyblog?)

But here are a few details! First off, on the question of whether North Korea has really truly actually ended the 1953 armistice: Maybe, maybe not. So far, there hasn't been an official announcement to that effect from a government office, but instead, a report in the "official Rodong Sinmun newspaper," which we presume is really official but not as official as, like, a proclamation issued by the People's Revolutionary Ministry of Foreign Affairs and Belligerent Sloganeering. This also isn't the first time they've said that the armistice was null and void; they said the same thing in 2009. Also, a UN spokesman said that since the 1953 armistice was adopted by the UN General Assembly, then neither North or South Korea can unilaterally declare it's over. This should be a huge comfort to any South Koreans if artillery shells start landing on them!

And how about that hotline being shut down? That sounds scary, too! The Atlantic explains that, as with so many things that happen with North Korea, Pyongyang didn't say anything about it, they just followed up their shouty propaganda by acting like dicks:

Because the two countries are officially not speaking to each other -- they have no embassies or diplomatic relations -- the only formal communication line between Pyongyang and Seoul is a Red Cross telephone line that was set up in 1971. They test the line twice a day, but when the South called the North at 9:00 a.m. on Monday morning, nobody picked up.

But once again, we may not need to read too much into this, because apparently this is another thing they pull all the time, most recently in 2010. The Atlantic also notes that while the North is making lots of noise about joint U.S.-South Korean military exercises (which only happen, like, every goddamned year), the actual screaming-to-danger ratio probably isn't especially high:

However, those military exercises that have upset them so much actually makes it a bad time to go messing around with the U.S. Navy. There are nearly 30,000 American troops stationed in the South Korea on a permanent basis and they are all on heightened alert right now.

That's also probably why the South's highest-ranking generals weren't sweating the prospect of doing battle this weekend. Instead of preparing for all-out war, they reportedly spent the weekend playing golf.

So the good news is that Alan Alda and Mike Farrell can probably come off emergency standby. The bad news is that now we're going to have to listen to Louie Gohmert bitching about those South Korean generals golfing.

UPDATE: How could we forget this?