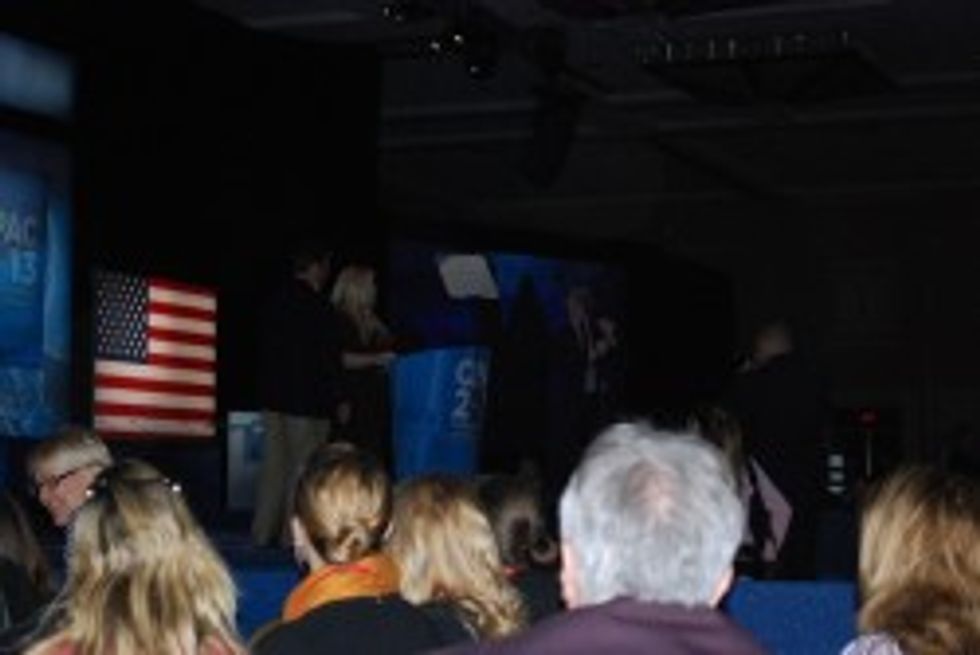 Wonkette Special Correspondent Prommie Promzerelli attended the Conservative Political Action Conference on a whim this weekend – and oh what fun was had! – as our dear Prommie soon found himself VIP-credentialed and fully immersed in CPAC’s unique and heterogeneous mix of the Libertarians, Angry Old People, Batshit Insane Colonial Re-enactors, College Republicans, and Prom-Queen Wannabees who had all flooded the halls of Maryland’s Gaylord Hotel. (Huh-huh... "Gaylord!")

CPAC, according to Prommie:

Saturday morning’s line-up was a short parade of horribles, a roster of all the usual conserva-talking suspects, including Scott Walker, Callista and Newt Gingrich, Michele Bachmann, as well as actual brain surgeon Ben Carson, who recently achieved renown and Presidential consideration in Republican circles, for showing his conservative Obamacare-hating ass at the National Prayer Breakfast with President Obama. But as healthcare analyst J. Buffett said, I don't think I would ever let him cut on me.

The morning was full of how to take America back, but mostly the speechifiers were surprisingly quasi-sorta reasonable, with much in the way of hollow but appreciated gestures suggesting that hey, evil liberal democrats are people too, sort of, and we should maybe all maybe work together sometimes, to do something good for the country. All this was noticeably strange, considering they were all there as part of the the run up to the CPAC crowd favorite, and our favorite frumious bandersnatch ever, Sarah Palin.

Yes, the nastiest of nasty, most vile and reviled, wretched, snarky, winky, full of herself, queen of all idiotic smugness, Sarah Palin was our noon time “speaker.”

Palin threw a lot of raw meat and big gulps at the crowd, and they ate it allll up, despite the fact that it was so unfresh it could have starred in a Massengill ad. Because, seriously, it was the same old tired shit. Sarah tossed out all of her old favorites: Obama’s takin’ our guns! Hey Crowd! Where’s the liberal media? We got some surveyor marks for you guys, why dontcha stand up? Where are you liars? Sidenote -- honestly, it is sort of terrifying to be called out in a crowd full of rabble rousers when your rabble is the one they are actually getting whipped up to rouse. It just is.

Apropos of nothing, in the middle of some nonsense about the Senate’s inability to pass a Federal Budget, Sarah, suffering from class-less-ness-envy, gratuitously invoked Joe Wilson’s apparently ubiquitous “YOU LIE!” with her ever-present self-satisfied sneer, and the crowd, of course, went wild with that rancid meat nugget. Palin also paid prop comedy homage to the smarter and much better coiffed Carrot Top, when she pulled out her Big Gulp, just to show that crowd that she was not about to give a shit about guidelines for healthy living, and she was ever so proud of her fatty-bratty behavior. We are just lucky she didn't do a little Honey Boo Boo belly squish for good measure.

But, her most ridiculous moment of all ridiculousness had to be when the jabbering hockey-momming-lip-glossing-pit-grizzley-bullying 2008 reject read an Obama-Teleprompter joke, throwing out there a tired four-year old remark to the effect, "Hey Mr. President, its time to step away from the teleprompter and do your job." Nothing new here, just some old rotted raw meat for the crowd, like the rest of her speech, but the amazing thing was, she read her Obama teleprompter joke FROM A TELEPROMPTER.

Yes, just before she was to take her turn with the talky-hatey thing, something very odd happened, for the first time all day. The stage crew appeared and set up ... teleprompters. NO ONE had used them up to this point, they weren’t even on or near the stage for anyone else at all. Not even Michele “one L, two crazy eyes” Bachmann had used a teleprompter til then, but Sarah had to have them, because her speech was too long to have written on her hands. Talk about your choots-pah!

But that's our always self aware Sarah, READ A JOKE ABOUT HOW LAME IT IS FOR OBAMZ TO USE TELEPROMPTERZZZ, from a teleprompter. Because she is the worst and stupid and wrong and dumb. And evil. Don't forget evil, also too.