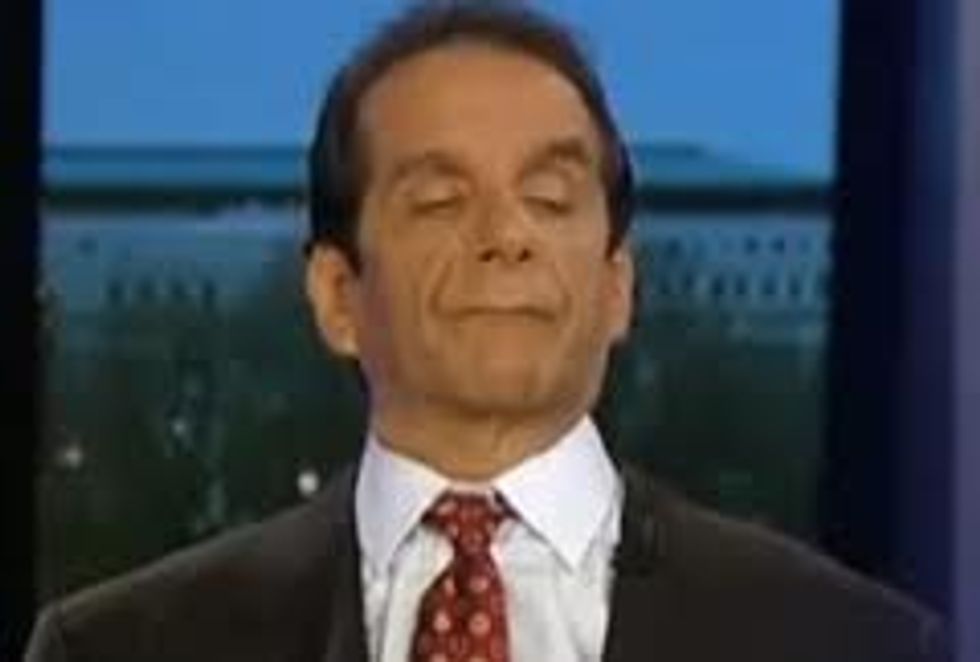 Wonkette, as everyone knows, is read exclusively by sozzled homelesses and retirees. But your long national nightmare might be over, hobos!Charles Krauthammer needs a researcher, and if you send him a missive filled with stern-sounding nonsense, maybe that researcher will be you!!

Who wouldn't want to go to work each morning for a man who thinks "the balance between liberty and equality [is] the central issue for any democracy" and who can find post-feminist pussification in (of all things) The Berenstain Bears?

It is not just the smugness and complacency of the stories that is so irritating. That is a common affliction of children’s literature. The raging offense of the Berenstains is the post-feminist Papa Bear, the Alan Alda of grizzlies, a wimp so passive and fumbling he makes Dagwood Bumstead look like Batman.

Hohoho, Charles Krauthammer! You are a dick!

Here, we have made you a cover letter. Please copy and paste it and send it along, with your CV, to job@charleskrauthammer.com.

I am intrigued by your help-wanted ad. Please tell me what it pays and if I will be excpeted to work in an office daily or if I may work from home, as I currently do not have an automobile due to the illegal and extrajudicial actions of the jackbooted thugs of the state police, who illegally seized said automobile, which property I was deprived of extrajudicially when through no fault of my own and as an act of kindness I tried to aid a young lady who was standing in the rain and it was cold out but she was an undercover "vice" officer. Our police state, as evinced through Barack Hussein Obama's extrajudicial drone strikes and cyber attacks on the sovereign nation of Iran, has run amok, on said automobile and my personal liberty and pursuit of property, the affront to which is only to be expected in this day and age of extrajudicial executive power unchecked by either the judiciary or judges.

I am excellent at researching, madam or sir, in addition to other sterling qualities all my former employers can apprise you of, such as independent thinking and a pioneering spirit. This has led in the past to some friction with some employers, as there are those who are too rigid and insistent on a certain way of doing things (always their way, funnily enough! I am confident you will not be taken aback by my humor!) but I am confident that all will be well between us, as I can surmise from the tone of your help-wanted ad that you too are an independent thinker who does not just state the expected.

Attached please find my latest research project, as a sample of what I can bring to your esteemed table. It details the inner workings behind Fast and Furious, and how the Bush Administration's series of gun stings was due to an extrajudicial plot by Eric Holder and Barack Hussein Obama to give Mexican drug lords our guns so they could kill federal agents which would lead the American sheeple to yammer for gun control; I sold this particular piece of research to the excellent fellows at the Daily Caller.