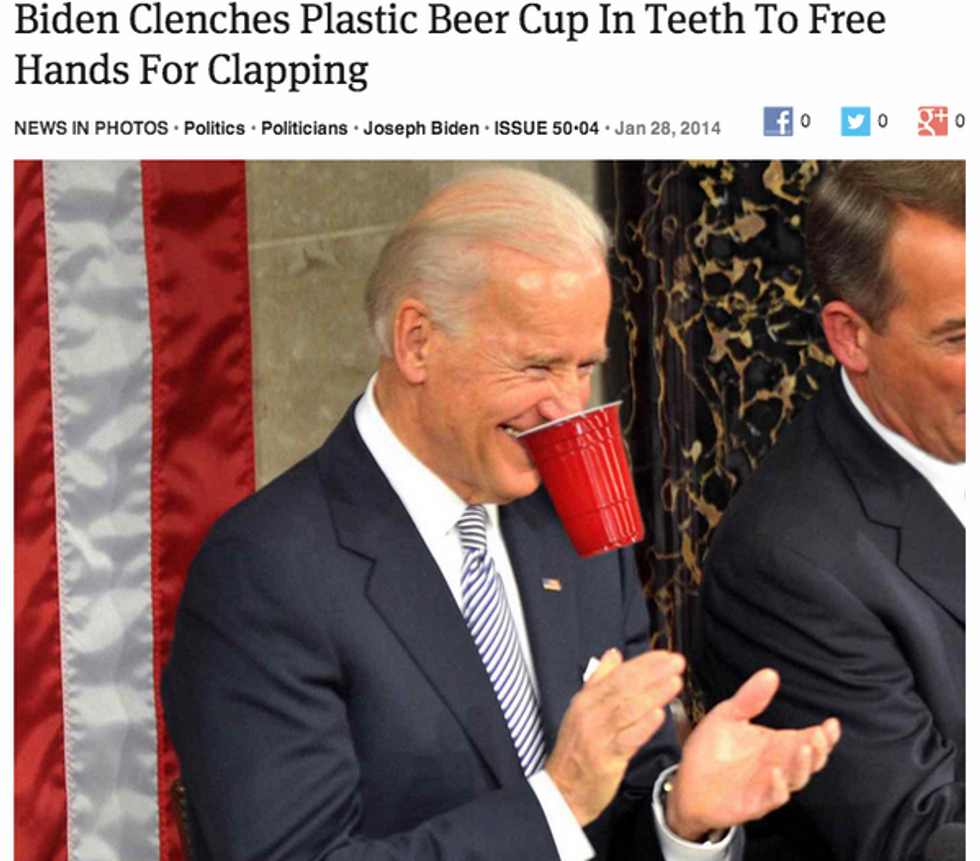 What time is the 2014 State of the Union SOTU Fox News? It is at 8:55 Eastern ET Time. What time is the Wonkette Livebloog time-stamped word salad refresh your browser to update liveblog? IT IS ABOUT AN HOUR AGO. Welcome to part two of your nonsense! Nonsensers!

10:09 p.m.: And we're back! That was a scary couple of minutes. It's a finely calibrated operation to move from one blog to another, nothelped by the fact that we're drunk.

10:15 p.m.: So far the only times we've seen Boehner stand up is for the veterans, because everyone loves The Troops. Now if he could just get his caucus of rabid ferrets to actually budget some funds to help them.

10:17 p.m.: Bamz totally bringing down the room with this horrible, horrible story. Now it's getting inspiring. Boehner looks like he's straining to drop a deuce. Now everyone is standing to applaud this guy. Pardon us, someone seems to be chopping onions in the Wonkette Command Center.

10:20 p.m.: Editrix informs us that the dog does not have gas and her poops are perfumed like the finest shops in Paris. Okay then.

10:22 p.m.: Randy Weber is a member of the Texas Legislature and his tweets have kept us entertained tonight. Did we say entertained? We meant filled with rage. Welcome to Wonkette, Randy!

10:25 p.m.: Aaaaand it's over until next year. Chris Matthews and Al Sharpton are babbling about...we don't know what. John Lewis! We loves him. How long until the first of the 97 rebuttals? We're going to refill our wine while we wait.

10:34 p.m.: Here she is, Miss Amer...er, Cathy McMorris Rodgers. God she's enthusiastic. Like a puppy slobbering and climbing all over us. WHO'S A GOOD AMERICA? WHO IS IT? IS IT YOU? IS IT YOU, AMERICA? YES IT IS!

10:36 p.m.: This is a good setting for the response, at least, sitting on a couch with a folded flag. She's getting thirsty, we can hear her trying to get some spittle in her mouth. Don't pull a Rubio!

10:39 p.m.: Won't someone think of the babies born with an extra chromosome but no dollars?

10:40 p.m.: Yes, we've all talked to lots of people who have gotten insurance cancellation notices. We have also talked to many people who have been able to get affordable insurance for the first time even with pre-existing conditions. Some people have good stories, some have bad! This is wingnut boilerplate, even if it's delivered in a soft voice by a matronly new mom with a flag behind her.

10:43 p.m.: Jamelle Bouie bringing the Twitter pain: "She thought the president's health care law would save her money but instead it murdered her entire family."

10:45 p.m.: The chatcave reaction to McMorris-Rodgers: Alex thinks she's basically Bobby Jindal in a garbage bag, Mrs. DDM says "She is the new Sarah Palin and I hate her" (all of Mrs. DDM's lines courtesy of  DDM.) That's about it. Mrs. Rodgers makes all the impression of a light breeze.

10:52 p.m.: The more we talk about McMorris-Rodgers, the more we are getting worked up. As Al Sharpton is saying, her speech was a bunch of bromides and nice words with no substance whatsoever. And what was that crap about a woman who had to drop out of college because she dropped out of tuition, and then went on as if meh, better luck next lifetime, taker. Has Barack Obama not made helping people go to college and pay for it a major issue of his presidency? Drink a dick, Cathy McMorris-Rodgers.

11:12 p.m.: Dok Zoom jumping in here; will have a recorded-bloggening of Mike Lee's Tea Party response just as soon as we can find the bloody thing. We bet he's going to say "Constitution" a lot, and call for Obamacare to be repealed. In the meantime, here is a tweeted pic of Old Handsome Joe Biden freeing up his hands, for the applaudening.

11:25 p.m.: Oh, mercy. As Michele Bachmann proved when she sincerely spoke to America's left ears a couple years ago, the Tea Party and tech do not play well together. Mike Lee gave his speech, but darned if we can find it. Tea Party Nation had a livestream, but they haven't yet converted it to a viewable video, so the heck with 'em. And I still have the taste of that terrible Jack Daniels Honey Swill in my mouth from last night; we'll see if decent scotch can drive it out. What we are saying here is that the state of the livebloog is OVER now. We'll have a wrapup of the Mike Lee and Rand Paul rants tomorrow morning, and for all we know there will be 26 others. Go to bed, you goofballs!