The Refuterer: Margaret Thatcher Was Not Actually Ronald Reagan’s Secretary 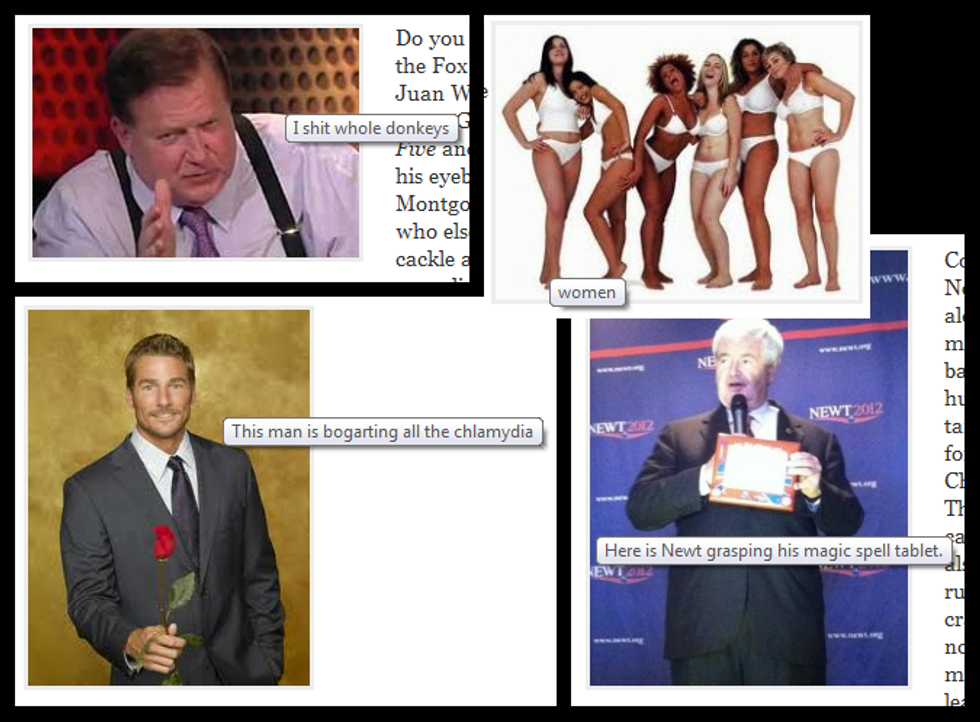 ConservativeOutcry.net has our number, along with a new feature, "Wonkette Refuted," responding to a "randomly chosen" article from Your Wonkette! The first victim? GOP To Ronald Reagan’s Secretary: Pay Those Taxes Harder! Unfortunately, this self-described "group of old men lamenting the destruction of the nation" seems to be unfamiliar with how the actual process of refuting is done. Since there are so many refutes in this very excellent and soundly argued article (2.5), we will simply never be able to address them all, and will have to mostly limit ourselves to their primary "refute" from Old Man Rooster, concerning the picture accompanying the article, as well as the "hover tag" (fancy internet speak, don't worry about it):

First, I think it should be noted that picture accompanying the piece is of Ronald Reagan and Margaret Thatcher, not Reagan and his secretary as one is led to believe when hovering over it with a mouse. Can't even get the picture right?

Wonkette regrets the error. Preemptively, Wonkette also regrets using this photo in an earlier post, which is not actually Mitt Romney, but rather is Scrooge McDuck:

This mistake is unforgivable, and we will do better in the future. To make amends, here is a collection of photos and tags used previously which are factual and accurate:

The rest of ConservativeOutcry.net's story is a bunch of nonsense, and there is no refutering jibber-jabber like Joe Lieberman's, which they cited approvingly, about how you cannot ask the wealthiest among us to pay more taxes because the uncertainty of whether or not they will pay more taxes is keeping them from investing the "billions" on which they are sitting. See, the thing about uncertainty is once a higher tax rate is agreed upon, the "uncertainty," she has vanished! ConservativeOutcry.net also takes umbrage at Obama going around the country politicking, for some unknown reason (Michelle's vacations probably?) and some other stuff too that is boring and inane, like if only Democrats would compromise ... sort of like they did on the Affordable Care Act, which was written by Republicans for Republicans and has now been deemed the most Marxist Socialist Leninist Trotskyite ... but we repeat ourselves.

Anyway, well played -- ? -- Conservative Roostermen. Your grasp of the concepts of both “refuting” and “satire” are firm and evident. Wonkette looks forward to having its very own ombudsman on the right keeping us honest, and making sure we never misuse or mislabel those fancy alt hover photo tags again. [TheWonketteRefuter]