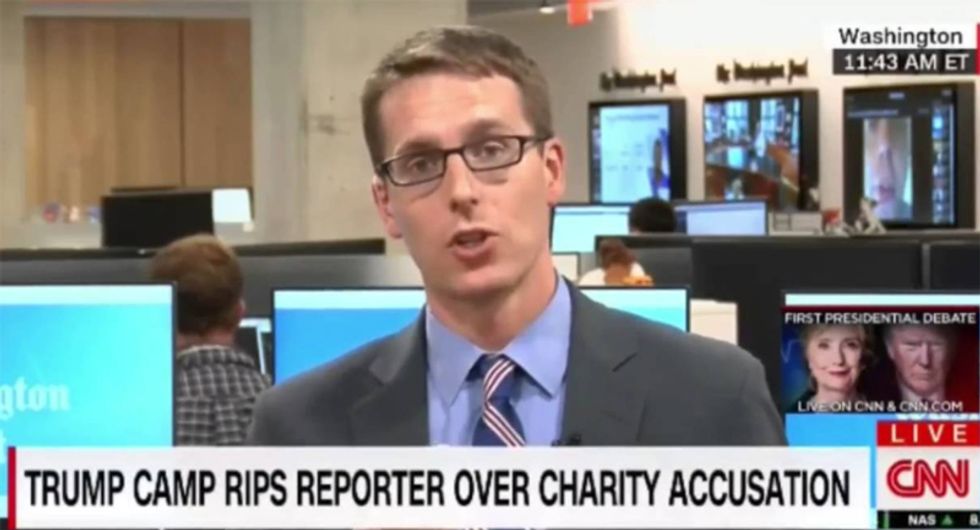 An inspiration to news geeks everywhere

Guys, we are completely serious about this. If you see a headline like "David Fahrenthold tells the behind-the-scenes story of his year covering Trump" and think, Pfft. Who cares about "behind the scenes," you would probably be right most of the time. But you'd be wrong about this time, because The Washington Post's David Fahrenthold has written an absolutely brilliant, amazing story about how he ended up breaking two of the biggest stories of the 2016 campaign: his investigation of Donald Trump's empty claims about having donated "tens of millions" of dollars to charity through his bogus, probably lawbreaking foundation, and the infamous "pussy tape." It's just an outstanding piece on how a hard-working journalist ferreted out information about a completely uncooperative subject, and it's an immensely satisfying read. Even if Fahrenthold isn't able to solve the biggest mystery of all: How the hell did this guy get elected president after these (and so many other) scandals that would have brought a swift end to any other candidacy?

Even if, like Yr Wonkette, you read virtually every one of Fahrenthold's WaPo pieces on Trump, this memoir-style piece is compelling reading, because it gives you a close look at how a top notch reporter does his job. Fahrenthold isn't just a good reporter, he's a good writer, with an eye for details that led him to go sniffing out the real story of the huge gap between what Trump said he gave to charity, and what he actually gave. He explains how he virtually stumbled onto the Trump charity beat with what seemed like an easy enough question: After Trump flounced away from a Republican debate because the TV networks were mean to him, and held a fundraiser to "help" veterans groups, what actually happened to the money? Fahrenthold noticed that, after a couple of campaign events where Trump gave out oversized novelty checks to local vets' groups, Trump suddenly stopped doing that.

So what happened to the rest of the money?

It sounded like an easy question that the Trump campaign could answer quickly. I thought I’d be through with the story in a day or two.

And from there, we get a jaw-dropping, often hilarious story of how Fahrenthold spent the next nine months covering Trump. Along the way, we get scenes that, if they hadn't actually happened, would sound like they came from an old episode of Columbo, like Fahrenthold getting a call from then-campaign manager Corey Lewandowski telling him all the money had been given away to veterans groups, but deciding he needed to confirm it somehow, since Lewandowski refused to provide details. So Fahrenthold took to Twitter, asking vets' groups if they'd gotten any money, and including Trump's Twitter handle, @realdonaldtrump, because he wanted Trump to see a reporter was looking for the information.

The next night, he called me to say he had just then given away the $1 million, all in one swoop, to a nonprofit run by a friend. That meant when Lewandowski said Trump’s money was “fully spent,” it was actually still in Trump’s pocket.

On the phone, I asked Trump: Would you really have given this money away if I hadn’t been asking about it?

And so began a beautiful enemyship that will no doubt result in a well-earned Pulitzer for David Fahrenthold. And maybe an IRS audit from the next president of the United States.

We won't go into all the details here, because Fahrenthold's article is too much fun to attempt to summarize. Oh, but there are some lovely slices of a reporter's life. David Fahrenthold might well do for J-schools what Woodward and Bernstein did in the 1970s, only with narrower lapels. You'll learn about the giant cave of government paperwork, about the expanding list of charities Fahrenthold called to ask if they'd received donations from Trump, and about how eventually Fahrenthold's four-year-old daughter

started talking about the Trump Foundation at dinner, just because her parents talked about nothing else. “He should give the money to the people, so the people get the money,” she said. “It’s not nice.”

He really isn't nice. And in a year when fake news on the internet has made us wonder if facts are an endangered species, Fahrenthold gives us a tutorial on how a good, honest reporter can use social media to track down answers that might otherwise not turn up, as was the case when Fahrenthold asked his Twitter followers to help him find one of the two ugly Trump portraits the candidate had purchased at charity auctions using Trump Foundation funds, in probable violation of IRS rules against "self-dealing." Within 14 hours of Fahrenthold's asking if anyone had seen one of them, readers had tracked it down at the Trump Doral golf resort.

So yes, Twitter can be a force for good reporting, not just Pepe the Frog memes, misinformation, and death threats. Which Fahrenthold also got, in one of the story's more chilling scenes.

And then there was the "Pussy tape," which not only became Fahrenthold's second big story of the year (and the top story ever on WaPo's website -- so popular the servers measuring the paper's web traffic crashed). But that's nothing compared to Fahrenthold's discussion of the deliberations Post editors had over what to do about all the salty language needed to transcribe the tape accurately:

Other words required a ruling from the bosses.

“Go find out about ‘tits’!” I heard one editor tell another, while the story was being edited — Trump had used the word in criticizing a woman’s appearance. The second editor left to find a higher-ranking editor who could make a ruling. “ ‘Tits’ is all right,” he said when he returned.

Somewhere, George Carlin is surely smiling at this victory.

OK, so go and read the whole piece already. It's worth your time, and if you haven't already become a David Fahrenthold fan, it'll probably make you one. Then come back here and talk about it in the comments we don't allow.

Follow Doktor Zoom on Twitter while you're at it. Especially if you're David Fahrenthold. We don't mean that in a creepy way, we promise.