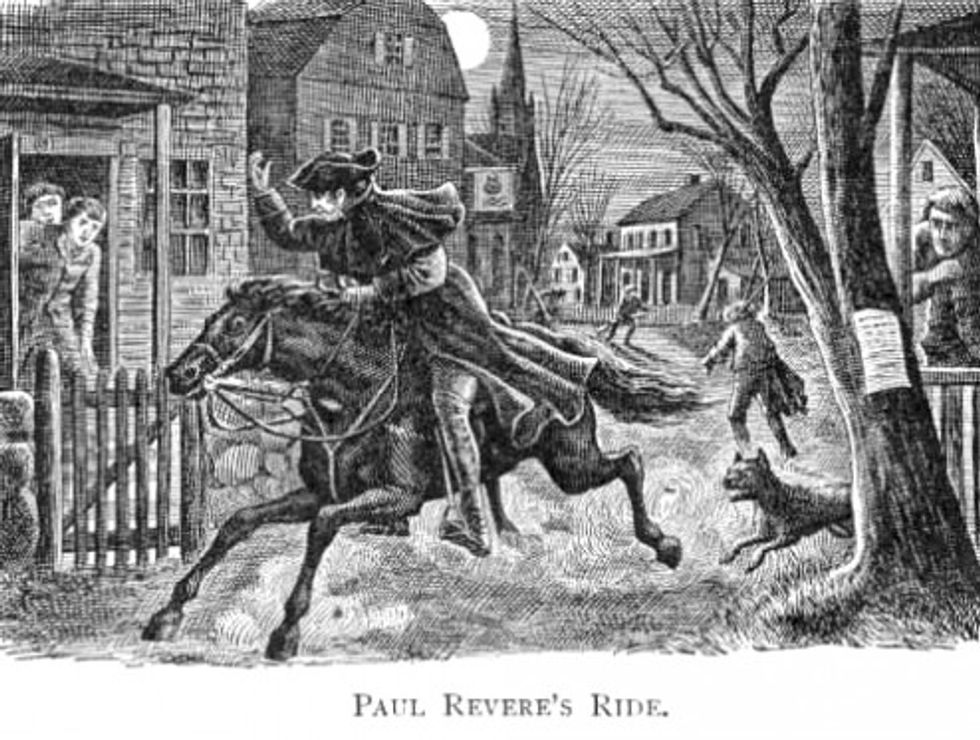 We do not usually read things from the UK because we are Mericans, but lately we have enjoyed the prose stylings of the Daily Mail. They've given us articles about how nonsense Boston bomber rumors are not true, but it would be interesting and HIGHLY SUSPICIOUS if they were, hmmmmmm? Britain's own New York Post also turned us on to the straight-up genius of human rights warrior and Limey nutsack Peter Lloyd, who let his army of monkeys type for millions of words to spit out something about how his gym is misandyrizing menz everywhere. Today they have a Drudge-siren bit of completely made up tommyrot balderdash about Saudi terror Boston bombers something something:

According to the Daily Mail, the "Kingdom of Saudi Arabia sent a written warning about accused Boston Marathon bomber Tamerlan Tsarnaev to the U.S. Department of Homeland Security in 2012, long before pressure-cooker blasts killed three and injured hundreds." The report is based on a single anonymous source: a "senior Saudi government official with direct knowledge of the document." By all indications, the Daily Mail did not obtain a copy of the letter, and they quoted officials in DHS and the White House denying that any such letter was received.

Well, OF COURSE DHS and the White House would deny that letter, because they murdered Benghazi and love Muslins and will kill America.

For real we are a bit confused why this super senior Saudi with secrets wants to tell them all to a news outlet that also shares the latest news on Khloe Kardashian's ability to squeeze into skinny jeans. (Forestalling the inevitable comments: yes, Wonket has ridiculous ads, but we are poor AND we do not write those things up as stories AND Saudis do not leak us seeekrits so we take what we can get.) But hey, broken clock, twice a day, so mebbe these guys stumbled upon a real Watergate-type story and are wearing out shoe leather chasing down leads? OF COURSE NOT:

The paper even acknowledged that they could not confirm their source's claims: "If true, the account will produce added pressure on the Homeland Security department and the White House to explain their collective inaction after similar warnings were offered about Tsarnaev by the Russian government." [emphasis added] The paper also seemed unable to confirm which intelligence agency produced the document: "The letter likely came to DHS via the Saudi Ministry of Interior, the agency tasked with protecting the Saudi kingdom's homeland."

As for the Saudi source, despite claiming to have "direct knowledge" of the document, he offered vague and arguably contradictory descriptions of its contents, describing it as "very specific" about its warning that "something was going to happen in a major U.S. city." And, curiously, the Saudi source claimed the same letter was sent to the British government, but the Daily Mail report offered no indication that the paper contacted British intelligence services to confirm or deny this.

So somebody Saudi maybe gave DHS a thing but super senior secret Saudi source doesn't exactly know what is in it, and he thinks it also maybe went to British intelligence but no one called James Bond or M to see if they had anything.

Verifying things is hard you guys so shut up! It takes valuable time away from making shit up and Kardashian-watching, which is why yr Wonkette is committed to just reading other people's stories and making fun of them. That frees up LITERALLY tons of time for us to learn about how Jennifer Aniston used to be fat but now she does yoga. Ta-ta!