Won't You Help Republicans In The Senate Get Their Chance To Repeal Obamacare, America? 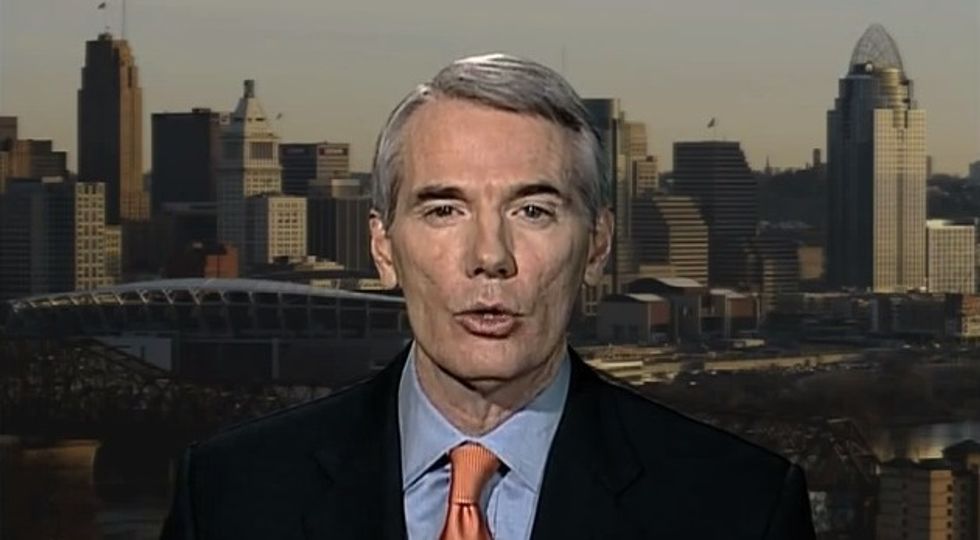 Sen. Rob Portman (R-Iron Man) is always surprising us! He displayed stunning acting range playing Barack Obama in debate prep for two generations of GOP presidential contenders, he suddenly contracted human empathy for the gays last year after he found out his son was one of them, and now he's shaking American politics to its very foundation by vowing that when Republicans seize back the Senate in November and lock Harry Reid in that little room under the stairs, they'll get busy right away on their groundbreaking new idea of repealing Obamacare.

I suspect we will vote to repeal early to put on record the fact that we Republicans think it was a bad policy and we think it is hurting our constituents. We think health care costs should be going down, not up. We think people should be able to keep the insurance that they had.

Yes, they should get their opposition to Obamacare on record! How else will we know how congressional Republicans feel about the issue? Sure, they wouldn't be able to override the president's guaranteed veto and there have already been more than 50 votes to repeal Obamacare that went nowhere at all, but those were in the House. Senate Republicans have been watching, writhing with jealousy, while their colleagues in the inferior chamber were able to push those little buttons and impotently vote NO, NO, ONE THOUSAND TIMES NO on Obamacare. Rob and his friends in the Senate are more than ready to get in on the action.

Even though Republicans want to burn Obamacare to the ground and build a payday lending emporium on top of it, they wouldn't be leaving you without health care, America! They are strongly considering coming up with "something" to replace it with.

I think we should [have an idea]. I think it is something that ought to go along with repeal to say, 'Yes, we think this is the wrong way to go. But we also think the health care system must be improved.'

We're sure the Republicans will have an alternative to the Affordable Care Act any day now, so just relax while they demolish it, everybody.

What's that? You think it's premature for Rob to be talking about what Republicans "will" do when they are definitely in charge of the Senate again, as a result of the midterm elections that have not happened yet? You must be one of those delusional liberals who doubts for one moment that everything will go to plan and the GOP will run the table in the Senate this fall. Rob Portman does not have time for your flights of fancy. He is busy moving the country forward by finding "some common ground on some issues" on which the Republicans can utterly defeat Democrats as soon as they're back on top.