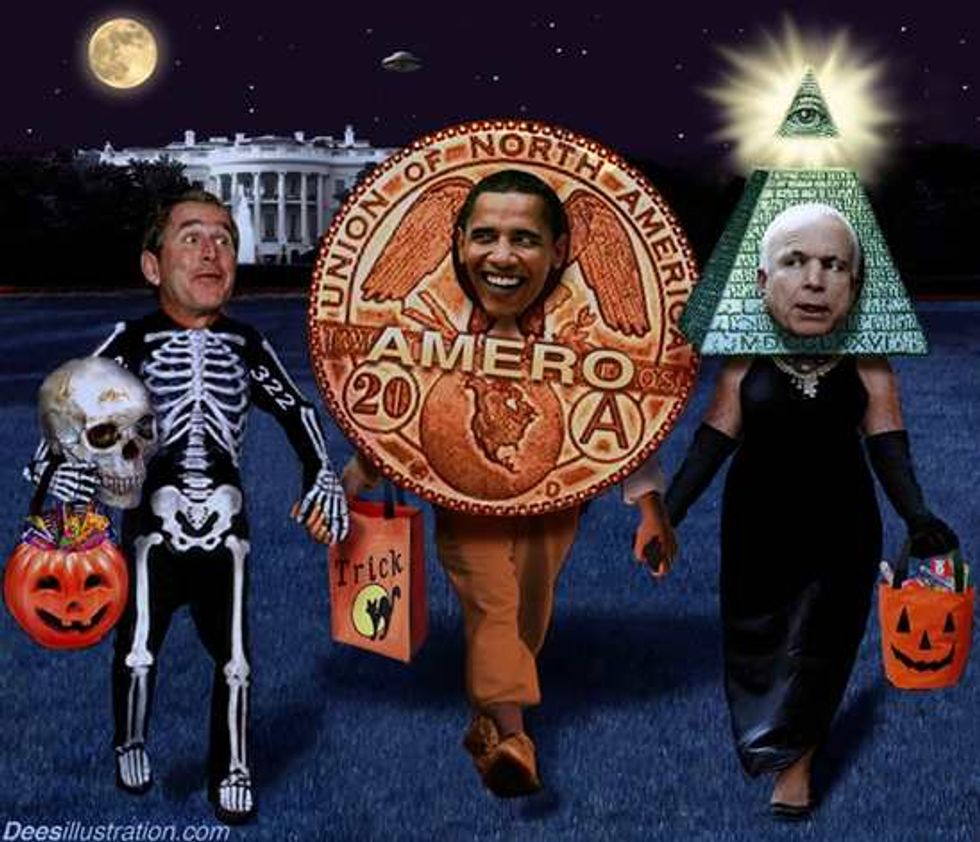 Hey, leftists and liberals and Democrats, remember a couple of years ago how super-excited you were about Barack Obama, the Chicago community organizer? Nobodyreally expected unicorns and a fair tax burden for the richest of the rich, but we were enthusiastic, right? Barack Obama has remained completely invisible during the intense labor battles raging in Wisconsin and Indiana and Ohio and even Tennessee. We sort of remember being at the Democratic convention and lots of Democratic presidential debates over the long 2007-2008 campaign, and it sure seems like labor played a decisive role in Obama getting the nomination and then winning the presidency. But now, even the head of the AFL-CIO is relegated to a backroom handshake with Joe Biden, because multi-millionaire golfer "centrist" Barack Obama doesn't want to dirty his hands with the actual lives of the 90% of the country not living large. Rich people protect rich people, it's that simple.

President Barack Obama, after initially lending his support to organized labor, has stepped back from the fights spreading in state capitals from Wisconsin to Tennessee, leaving union officials divided about his tactics.

Mr. Obama is eager to occupy the political center, Democratic officials said, to help him forge a bipartisan deal on the nation's long-term finances that could strengthen his position heading into the 2012 election. Mr. Obama has already tacked to the center on taxes, on trade and by working to forge stronger ties with business leaders.

Yeah, because it's all about strengthening his position leading in '12, and then maybe he'll show some interest in working people and labor and the way corporations and the richest people barely pay any taxes in this country, and who knows, maybe then he'll care about the gazillions that go to the Pentagon -- for the sole purpose of enriching defense contractor corporations, unless you consider "maiming and killing poor people with no other job prospects" or "losing gigantic wars all over the world" to be intentional.

You know, Barry, you are president right now. It's one thing for you to be a clueless spectator on something like Egypt or Libya, but it's very much another thing to be out to lunch on midwestern labor battles. If you stood for anything, you could get a hundred thousand people to join the Madison protests. You could put Scott Walker in jail for planning to hire thug violence against legal protests, the same way your betters protected the protesters during the Civil Rights Movement.

But, nah, there's no way to get those million-dollar speaking engagements and free corporate jets and exclusive golf vacations and seven-figure book deals year after year if you go all liberal, right?

Here's something from the paper they actually pay attention to at the White House:

Rep. Keith Ellison (D-Minn.) said Wednesday night on MSNBC that Obama “should come to Wisconsin and stand with the workers.” The co-chairman of the House Progressive Caucus, Ellison added that he would “of course … like to hear more from President Obama” about the efforts of Gov. Scott Walker and Republican legislators to push through a bill that would limit collective bargaining for most state employee unions.

“The fact is, is that it’s working people who are going to be pounding for him in a couple of years,” Ellison said, referring to the 2012 campaign. “It’s working people whose policies that we elected him to pursue, and so, I think it’s only sensible that he would stand on the side of labor at this time.”

Ooooh, but Keith's a scary Mooslim, so you can't even respond to that, right? Because there's a real good chance angry old white people are going to turn around and vote for you in 2012, right, Barry? Right?

You aren't Reagan. Deal with it. (Reagan was white.)