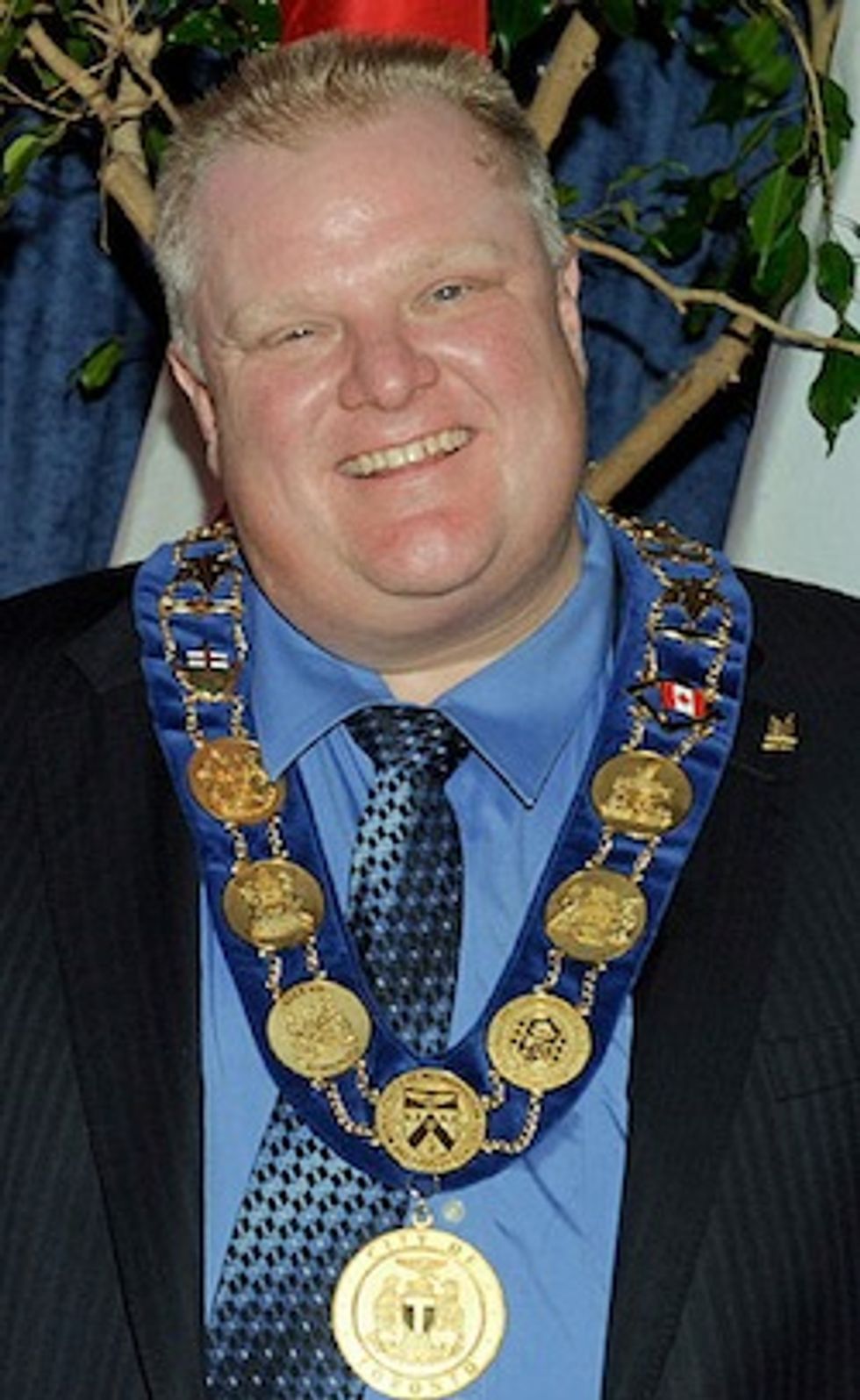 At least we'll always have, um, this

Aw man, here's some sad news from our neighbor to the north. The world's greatest mayor of all time ever, at least in Toronto, is dead at the age of 46, from his 18-month battle with a rare and particularly nasty form of cancer:

A brief statement from the Ford family announcing the death Tuesday described the former mayor as a “dedicated man of the people” who “spent his life serving the citizens of Toronto.”

“The family will not be making any statements to the media or taking any questions,” the statement said.

We don't like to speak ill of the dead, especially when the dead gave us oh so many great chuckles while he was "serving the citizens of Toronto." But it would be irresponsible of us not to remember some of the highlights of Mayor Ford's great reign. We are not in the habit of caring at all about Canada or its politics because come on, they're not even a real country anyway, but Ford's tenure certainly made us take notice.

He first came to our attention way back in 2011, when we learned there is a place called Toronto, with a mayor called Rob Ford, who had dialed the Canadian version of 911 to hysterically report that some TV comedian lady had shown up at his house to interview him for her comedian TV show:

Ford ran and hid like a shivering goat and called police — twice — allegedly yelling at the operators, “You … bitches! Don’t you f—ing know? I’m Rob f—ing Ford, the mayor of this city!”

He rose to further prominence in the Wonkette archives in 2013 when a video emerged of what sure looked like Toronto Mayor Rob Ford smoking crack. Ford's office initially denied that it was Ford in that video, smoking that crack. Months later, Ford admitted that yeah, OK, he actually did smoke crack, but he wasn't an addict, he could quit any time he wanted to:

“Yes, I have smoked crack cocaine. I am an addict? No. Have I tried it? Probably in one of my drunken stupors, probably about a year ago.”

He also said that he hadn't been lying when he denied he'd smoked crack because the media had failed to ask him "Hey, Mayor Ford, that you smoking that crack, buddy?" in the right way.

In addition to his occasional recreational drug use, we also learned that Mayor Rob Ford had a bit of a temper and a potty mouth, at least when he was super raging drunk:

“Brother, you’ve never seen me fucking go… But when he’s down, I’ll rip his fucking throat out. I’ll poke his eyes out. I will, fuck, when he’s dead, you help me make sure that motherfucker’s dead. I need fucking ten minutes to make sure he’s dead. It’ll be over in five minutes.” [...]

“It’ll be a bad scene… I am a sick motherfucker, dude… Like no one’s gonna fuck around with me.”

Shortly thereafter, Ford treated us to the world's greatest press conference of all time, at least prior to Donald Trump's presidential run, in which Ford denied that he had chowed down on some illicit poontang of a former female staffer:

Ford then said he never said “I want to eat your pussy” to a former female staffer, an allegation contained in the court document.

“I’m happily married, I have more than enough to eat at home,” he said, drawing gasps from the reporters gathered around his office.

Like any good disgraced crackhead mayor on a time-out, Ford then teased us with news that he was going to be doing a reality TV show with his brother, Doug, who said of the mayor that he "is like Howard Stern or Rush Limbaugh” and “You just never know what he is going to say.” We were really looking forward to that reality show, but it was not to be.

In April 2014, Ford announced his re-election campaign for mayor, with a pitch we certainly found persuasive:

“I’m running on my record and my record is second to none,” Ford said at the Toronto Congress Centre. “I’m the most open hard-working mayor this city has ever had. I continue to pledge honesty and transparency.”

Alas, that was also not to be. Ford was diagnosed with pleomorphic liposarcoma and was forced to drop his re-election bid to undergo several months of ultimately unsuccessful treatment.

We offer our sincere condolences and a hearty "FUCK CANCER" to Ford's family and all who loved him, in spite of, or perhaps because of, his colorful personality and his inspired dedication and service to the people of Toronto.