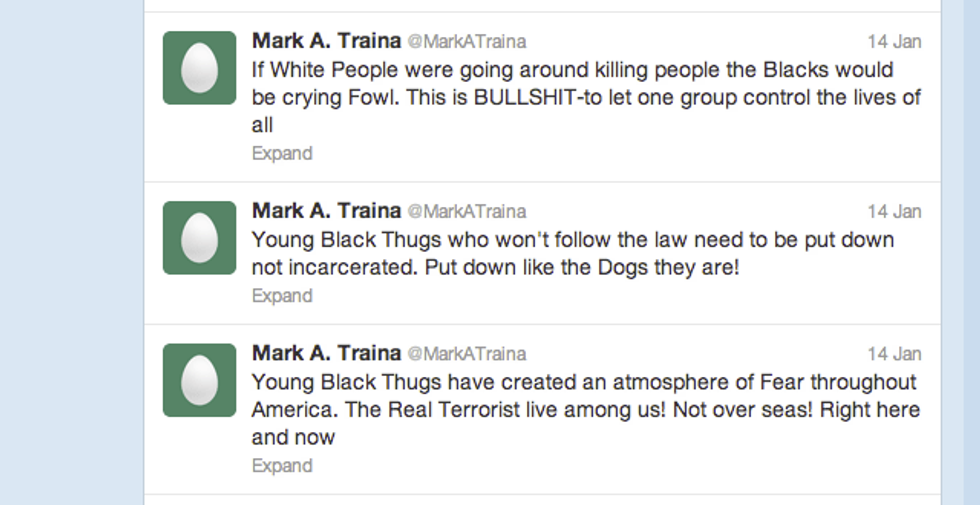 Mark A. Traina, a school psychologist in Louisiana's Jefferson Parish, totally loves his job segregating black children in the parish's "alternative schools." (This is where bad children and smokers go.) But now the stupid Southern Poverty Law Center is suing his school district for racial discrimination, and he is Exhibit A just because he twitzed a bunch of stuff about how black children are criminals who should be put down like dogs! Jeez, SPLC, oversensitive much? Anyway, Mark A. Traina has an airtight alibi about those twats and NOLA comments. Is it that he didn't write them? No, it is that all you have to do is look at prison populations to see that crime = black, and vice-versa! Good alibi, Mark A. Traina! Good luck getting the everloving fuck sued out of you!

"The Southern Poverty Center knows that these allegations are ABSOLUTELY NOT TRUE!," Traina wrote in an education forum on NOLA.com last week, using his own name as he criticized the center's earlier allegations. "This is just another way to harass the Jefferson Parish Public School System. One only needs to read the Times Picayune to see who the real trouble makers are. Sadly, it is disproportionately young black males. Everyone knows that our jails throughout the United States are disproportionately filled with black people. Why would the rate be any different in an educational environment?"

He rests his case! But are you sure there is nothing you want to add, Mark A. Traina?

"Everything I said is fact-based, backed up by data," he said. "I don't have a prejudiced bone in my body. I'm not a racist. I'm a realist."

Let us peep some of Mark A. Traina's tweets, which are most definitely not racist:

OK cool! So, Jefferson Parish, have you fired Mark A. Traina, "Wallace Man," who thinks black youths are "terrorist" but he is not racist, yet? How about ... now? Now? No? Pfft. Fucking unions. Oh well, once they do, we hear NRO is hiring.