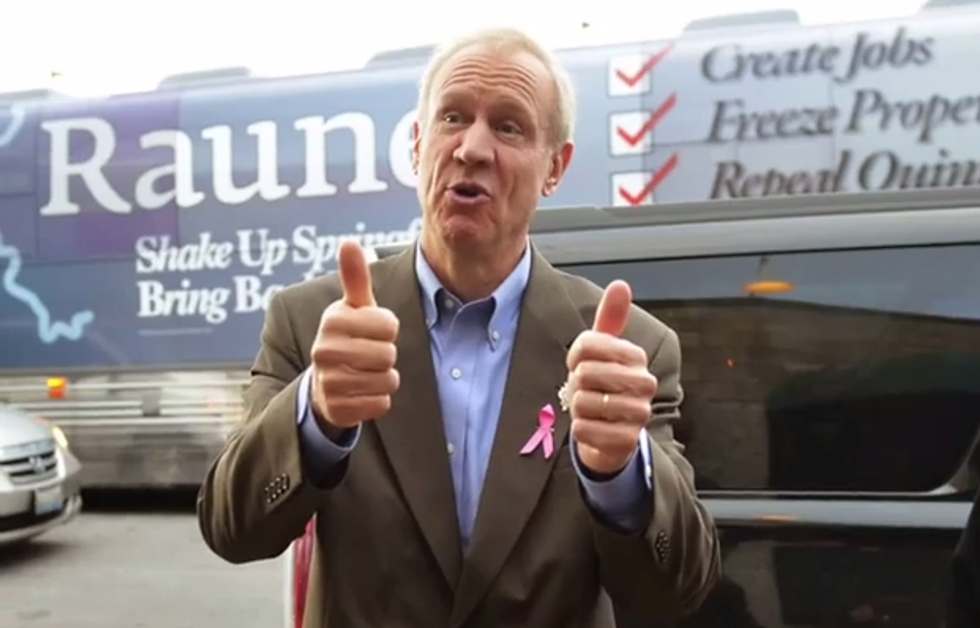 This guy. Jesus, this guy. Republican Bruce Rauner, who has more money than God and a better wine collection too, wants to be the next dude to get evicted from the Illinois governor's mansion and sent to prison. (That's what happens to all of them, right?)

His pitch to voters is that he's just a regular schmo -- with a van! -- who, like any other average American, shelled out a quarter of a million bucks to get his daughter into an elite school from which she was rejected until, by total coincidence, he paid up. Does he sometimes support, but usually not support, a minimum wage? What do you think?

Rauner also, according to this story that we have a very hard time not believing, bullied veteran Sun-Times reporter Dave McKinney out of his job for the crime of reporting a story that was not especially favorable to Rauner. The original story, strangely enough, was about Rauner being an asshole to a former employee who was suing him and whose life and family he threatened to destroy. According to McKinney, Rauner basically did the same thing to him. Notice any recurring themes yet?

Rauner's campaign sent "an opposition-research hit piece" to McKinney's boss, about his wife -- basically, a "nice career your wife's got there, would be a shame if anything happened to it" intimidation tactic. McKinney was then pulled off his beat; his reporting was removed from the paper's website; he was put on leave; and he was told, when he returned, that he shouldn't do any more reporting on the original story. The paper shortly thereafter "reversed its three-year, no-endorsement policy and unequivocally embraced the very campaign that had unleashed what Sun-Times management had declared a defamatory attack on" McKinney. Yes, after all that, the Sun-Times endorsed Rauner. All of which kind of sort of very much had a chilling effect in the newsroom and led McKinney to resign in a letter he made public, describing what certainly seems like retribution for reporting an unfavorable story about Bruce Rauner. You can and should read his entire letter.

That's the shot. Here's the chaser:

Rauner was asked if that was sign of how his office would treat reporters if he becomes governor.

“You know what, I think that’s an internal dispute inside the newspaper. I personally had nothing to do with it," Rauner said. "Our campaign staff followed normal processes they do with all media sources when they disagree with a story or the facts behind a story."

Rauner said his staff "made their views known with the reporter and the editors before the story ran; that’s standard process."

That's a reassuring non-denial denial, isn't it? Rauner says his own nicely manicured hands are clean and as to anyone working for him? Just following "normal" and "standard" procedures -- that is, sending a reporter's bosses a hit piece about the reporter's wife, just like any modern political campaign run by the Borgias. You notice what Rauner isn't saying? He isn't saying, "Of course that story is completely false, because I would never engage in those kinds of highly inappropriate intimidation tactics, nor would I allow anyone on my staff to do such a thing." He isn't denying anything at all.

There's also some charming typical conservative claptrap about how we should impose a travel ban on certain African countries, despite what the experts say, because Rauner, like every conservative in America, is an Ebola expert now.

"Why should we allow foreigners coming from the three countries where Ebola is widespread? It’s a massive problem. Why should we allow them to get visas and come to the United States?" Rauner said. "We should do everything we can to protect American citizens, Illinois citizens from this virus."

He sure seems nice, doesn't he?