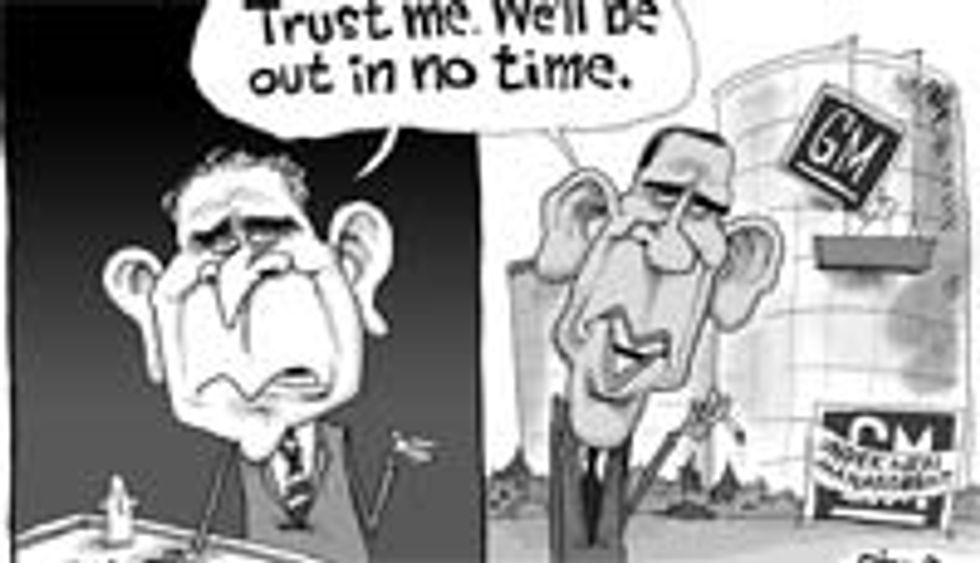 Look, one of the things we namby-pamby liberals get critiqued for is our inability to just stand up and show some moral courage, to say that some things are right and some are wrong. Usually we're all like "Oh, there's context" or "It's society's fault" or "Who are we to judge" or whatever. But sometimes, even the most consensus-addicted hippie has to take a stand. Today, your faithful Comics Curmudgeon will identify five cartoons that are simply incorrect.

Look, Barack Obama is on his knees, reaching out to touch the beautiful roses of Islam. But watch out for those thorns of extremism, Mr. President! Here, why not wear this gardening glove of U.S. military might?

Here's the thing: if you need to label literally every single goddamn element of any importance in your political cartoon, then your political cartoon is wrong. I mean, why stop here? Why not label Uncle Sam "America" and label Obama "Barack Obama, the president of America" and the bend in his waist as "Bowing to the King of Saudi Arabia?" Why not pursue things to their logical conclusion? In fact, why not just replace the whole cartoon with a 1,500-word essay on the dangers of pursuing rapprochement with the Islamic world? At least then we'd know in advance to skip it.

Speaking of following things to their logical conclusion, here's a cartoon that might not have been wrong if it had the courage of its convictions. It depicts a lonely Barack Obama visiting the park, with a bag of nuclear bread crumbs for his pigeon friends. At first, he offers a radioactive morsel to the lone Iran-pigeon, but you know how those pigeons are! Soon dozens of them are flocking to him, looking for a tasty atomic treat of their own.

That's all well and good, but why has Obama merely vanished under the pigeon-pile in the second panel? In order to drive home the nuclear horror his naive good intentions have unleashed, he should be depicted running away from the bench shrieking in terror; or, better yet, the pigeons should be feasting on his flesh, just as America will be devoured once the pigeons of the world acquire nuclear weapons. (This would be true whether by "pigeons of the world" we mean rogue states or actual pigeons.)

Hey, you know what's fun? Comparing things that are kind of alike! For instance, this cartoon posits that a war started on misleading pretenses might have some similarities with a government-sponsored corporate reorganization! This, however, is wrong, because wars involved tens of thousands of dead people, and even more people losing limbs and being psychologically scarred for life, and whole societies wrecked for decades, whereas a corporate reorg at worst means, what, we might be subsidizing some electric cars or something?

To be fair, though, this cartoon is right in that it depicts Obama with a cigarette in his hand. This is actually a fairly common visual trope among conservative political cartoonists and it's pretty much the best thing they've done with him visually yet. Certainly better than the ears.

The funniest Barack-Obama-smoking cartoons are those that depict him casually puffing away on a grubby little cigarette. I suppose you could get some mileage out of having him doing it surreptitiously out on the White House back porch (does the White House have a back porch?), looking around nervously all the while; however, if you did so, he should strictly be smoking tobacco. If instead he was smoking a spliff the size of a sub sandwich, it would probably be more appropriate to depict him as very, very relaxed, and possibly lying down. Thus, this cartoon is wrong. Barack Obama is far too cool and collected to be a paranoid smoker.