You Can Pry The Smith & Wesson From Lady’s Cold Dead Hoo-Haw, And Other Notable Gun News 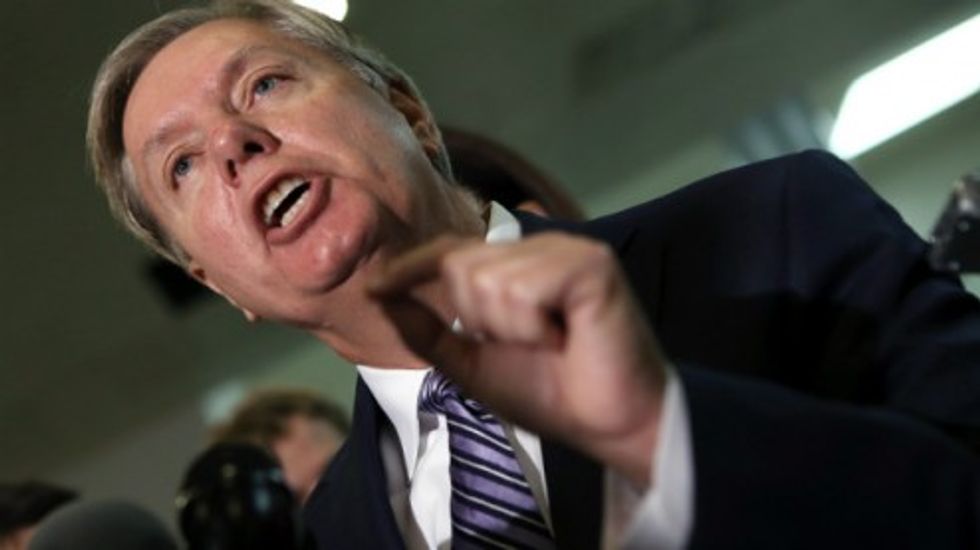 Oh hai! Welcome to this edition of Our Cold Dead Hands, Wonkette’s weekly look at the state of the gun debate in America, where evil liberals bent on controlling every aspect of your lives continue their efforts to disarm the brave patriots who are the only line of defense between you and the FEMA death camps. You’ll thank them some day, you docile sheep!

Last week we told you the Senate Judiciary Committee was all set to consider some gun bills being written by radical leftists like Chuck Schumer and Dianne Feinstein. On Thursday, the committee actually passed one bill outlawing straw purchases, which is the practice of buying a gun on behalf of someone not legally allowed to buy one his own self. And a Republican –- Chuck Grassley –- actually voted in favor of it. Hooray bipartisanship! The bill now goes to the full Senate, where it will die in a filibuster because some generally moderate senator like Ham Biscuits is up for re-election next year and doesn’t want to get primaried by a rabid Tea Partier. Need proof? Here is Ham Biscuits himself, in full peacock mode, yapping about how, in the event of another Katrina, he would want his AR-15 to defend himself and his family from the roving (cough cough black) gangs of murderous (cough cough black) thugs who laid waste to New Orleans in the hurricane’s aftermath. Shhhh, no one tell Ham Biscuits that myth has been debunked, so we can continue imagining he and his life partner John McCain and their multicultural passel of adopted children wielding assault rifles in defense of their tastefully decorated French Quarter town house against a gang of extras from The Warriors.

Ham Biscuits is sponsoring another bill in the Judiciary Committee right now, one that would exclude more people with mental illness from buying guns. No word on its chances (though the NRA endorsed it, of course), but DiFi’s assault weapons ban is not likely to make it out of the committee, and Schumer’s bill to enact background checks on all gun purchases, including those at gun shows, suffered a setback when the Sage of the Oklahoma Plains, Tom Coburn, withdrew co-sponsorship for the reason we cited last week, which was that Dr. Tom and Schumer could not agree on what to do about records from private gun sales. Background checks are President Obama’s biggest goal for gun-control measures, which means the bill will never reach his desk even if it gets out of committee, because Republicans cannot stand to give him a victory, even if the bill might actually have some positive benefits for society.

Do we sound too cynical? You must be new here. But we will humor you and check in on the state legislatures, just to…what’s this? Holy crap, a reason for optimism! This week Colorado’s state Senate passed several gun-control bills to enact universal background checks, including measures to extend background checks to online sales and limiting magazines to no more than fifteen bullets. Colorado’s governor has indicated he will sign the bills. Two other measures, one to hold assault weapons owners liable for damage caused by their guns and another to allow colleges to ban guns on campuses (because if there is anywhere you want guns circulating, it is a population made up of mostly binge-drinking, overly hormonal teenagers) were pulled from debate because Democrats did not have the votes to pass them.

Elsewhere, several states are considering bills to impose new taxes on the purchase of both guns and bullets. Those taxes would be used to fund programs like gun buybacks, firearms safety and anti-violence campaigns, and programs to treat mental illness and crime victims. These are actually good ideas! These statutes do somewhat balance out others like the one the governor of South Dakota signed this week to arm teachers, the town in Georgia that wants to mandate gun ownership for all homeowners, and the doofus in Missouri who wants to make it a felony for his fellow lawmakers to even propose gun-control measures. Oh well, omelets, eggs, etc. We usually only hear about state legislatures when they pass personhood statutes or mandate that any slut who wants to abort her Jesus babby first shove a nine-inch wand up her hoohaw for some reason, so it is a nice break to contemplate legislators who are not complete assholes.

Speaking of hoohaws: Ladies, your vagina is useful for so many reasons, but how many of you knew you could employ yours as a holster? Allow us to introduce you to Christie Harris, world champion of kegeling, apparently. While being booked into jail for possession of (what else) meth in (where else) Oklahoma, cops found a five-shot .22 sticking out of Christie's holiest of holies. Did the gun have live bullets in it? Well, it would not be much use otherwise, would it? Ladies, we cannot say it strongly enough: please do not stick loaded guns in your vaginas. Among other reasons, it is most unsanitary.

Say, you know who is not a big fan of guns, even though he lives in Arizona? Mark Kelly, husband of Gabby Giffords. Weird, right? Kelly and his wife have become outspoken advocates for gun control, for reasons that should be obvious to anyone with an IQ above single digits. Which is why we thought it a bit odd when we heard Kelly had been spotted at a gun shop in Tucson buying a .45 pistol and a used AR-15. But who knows? Maybe he was giving them to someone as a gift. Maybe he needed them as a prop for some ad or anti-gun rally. Maybe he has received so many death threats from hyped-up gun fetishists that he feels he needs guns to protect himself and his wife (O irony!). But we would give Kelly a pass on this one. Issues! They are nuanced, right?

Ha ha, if that were true, what would we have to write about? It seems news of Kelly's purchase came to the attention of the editor of a newsletter called Guns & Patriots, who passed it on to the ace journalists at Dead Andrew Breitbart’s Newseum of Circle Jerking, and soon the air filled with cries of “hypocrite!” Kelly took to his Facebook page with a defense that, quite frankly, sounded a little lame to us. But he certainly said nothing worthy of the vitriol unleashed in the Facebook comments, of which there are well over two thousand as of this writing. We read a couple and came across this charmer: “Too bad you didn’t buy that before January 8, 2011, you could have been able to protect your wife like a real man.” After that, we turned off our computer and poured ourselves a thermos of bourbon. Venture to that thread at your own risk.

Finally, because we live by the adage to always leave ‘em laughing, we give you Mary Alday, Walmart shopper and extreme couponer. Alday tried to use an Internet coupon at a Walmart in Florida, only to be told that the retailer did not accept online coupons. Alday became so upset she cursed out an assistant manager and rammed her with a shopping cart. After security escorted her out of the building, several employees followed Alday to the parking lot to get her license plate number, whereupon the nice lady pulled out a Smith & Wesson .38 and pointed it at them. The Walmart workers, smartly deciding that eight bucks an hour and no health insurance was not worth getting capped, retreated. Alday took off in her SUV. A sheriff’s deputy pulled her over a few minutes later and had to taser her when she refused to get out of the car and “reached for something in the passenger seat.” Hey, at least he didn’t shoot her! The bonus? The coupon Walmart would not accept was for only a dollar off. Your Wonkette has been unable to confirm if Alday was attempting to purchase some of those cakes we like.

And that, Wonketeers, is about all the fun we can handle this week. Remember, a gun is more afraid of you than you are of it. Or is that bees? Anyway, stay safe out there.